WATCH: Teacher Sentenced For Having Relations With Three Students 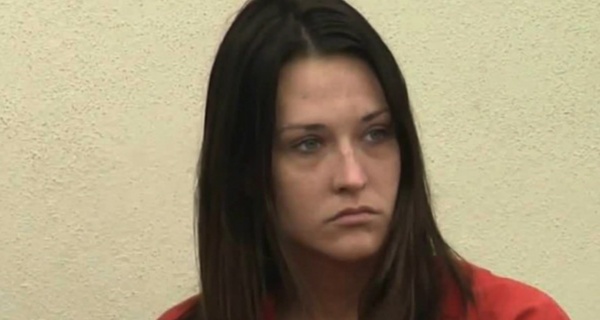 Tiffany Eichler stood in front of a judge, her face visibly distressed as she awaited her fate.

In a frail voice, the 36-year-old former McKinley High School teacher apologized for having sexual relationships with three male students and to the teaching profession, school district and the victims “for putting everyone in this position.”

Her attorney, Brad Iams, addressed Stark County Common Pleas Judge John Haas, pleading for leniency and predicting she would not re-offend since she’ll never again be in a teaching position. He also spoke of how she wrecked her career and subjected herself to public humiliation.

Then it was Stark County Assistant Prosecutor Christy Donnelly’s turn. She asked for prison time, citing concern the defendant “has not fully held herself accountable for her actions.” In a court filing, she specified a term of four years.

The judge heard the emotionally-charged sentiments of the mother of one of the victims. She chastised Eichler for manipulating her son and failing both as an adult and teacher, branding the former educator a “professional predator.”

But after the scathing words and tense moments, Eichler avoided prison.

Instead, Haas sentenced her to 30 days in jail and 30 half-days in a non-jail reporting program administered through the criminal justice system. The sentence also includes three years of probation and a host of other conditions, including counseling, 300 hours of community service, a $1,000 fine and paying counseling costs for victims.

Eichler, an Atwater resident, was immediately taken into custody to begin her jail stint. Haas warned Eichler that he’s reserving 60 months in prison if she violates terms of her three-year probation.

Haas was adamant about the defendant writing an essay related to the wrongfulness of her actions, the consequences and “the harm you have caused.”

“We will let the schools know of that statement to the extent that they wish to use it to increase the consciousness of the staff,” Haas said. “That could, in fact, be a positive.”

Eichler pleaded guilty last month to three counts of sexual battery, each carrying a potential prison term of one to five years.

The sexual encounters occurred between Feb. 20 and Feb. 24, the four days Canton City Schools were open that week, according to court records filed in the case.

Donnelly said that she knew of no other victims beyond the three cited in court records.

Eichler has already lost her teaching license, is barred from teaching again and will have to register as a sex offender for the rest of her life.

Haas chided Eichler for not meeting the high standards expected of educators.

The public trusts that teachers and coaches “are dedicated to the well-being of the youth in their charge,” Haas said. “You violated that trust and in so doing, you caused harm to the victims, the families, yourself, your family and the profession itself.”

“Boundaries have to be set and thereafter respected,” he continued. “There is no excuse, there are no exceptions.

″... The reality is that there is not a likelihood that you will re-offend,” Haas said of Eichler, who has no prior criminal record and is married with children. “You have in fact already been punished, losing your job, your teaching certification, your respect for yourself and your respect of others.”

Haas cited Eichler’s cooperation in the investigation and her remorse.

Addressing the court prior to sentencing, Donnelly spoke of the sweeping negative impact of Eichler’s actions and how the former physical education teacher portrayed herself as a victim.

Following the hearing, Donnelly referred to the sentencing document she filed in which she wrote that Eichler told a counselor “the students at her school always approached her for sex and that she never initiated sexual activity with them.”

Donnelly cited a report issued by the counselor in advance of the defendant’s sentencing.

Eichler told the counselor, “I’d tell (students) no and they’d keep asking; it wasn’t like I was looking for it. ... I felt pressured into it.’”

With a separate male student, Eichler called him to her classroom during non-school hours “and she herself locked (the) door in order to engage in sexual conduct,” the assistant prosecutor wrote.

She questioned whether Eichler is truly remorseful. “The focus of her plea to this court is to spare her family the impact of prison,” Donnelly said.

Additionally, Donnelly wrote, ”(The prosecutor’s office) has always been concerned that the sentencing, in this case, would be considered differently because the defendant is a female teacher with male student victims, and that there would be a level of sympathy given to this defendant which would not have been given if the genders of the parties were reversed.

“It has become evident ... that the letters of support, submitted by the defendant and her supporters, are attempting to do just that ... to gain the sympathy of this court for her position as a wife and mother (while not expressing sympathy for the victims, their families or the school system).”

Other conditions of the sentence

Snapchat was the primary form of social media used by Eichler to communicate with the student victims, Donnelly said. In his sentence, Haas said Eichler is not to use Snapchat.

Other conditions of her sentence include completing programming at Melymbrosia Associates related to sexual offenders and not having contact with the victims or their families. On Aug. 15, during pretrials, Eichler must appear before Haas for a review of her compliance with terms of the sentence.

Eichler resigned from her job effective March 30. She had been placed on unpaid leave on March 9.

A mother of one of the victims spoke emotionally in court, deriding Eichler.

No victims or other parents of victims spoke during the sentencing hearing.

Of her son, the woman said, “He is known as a good kid who will do anything for anyone. Miss Eichler, you took my son’s kindness for his weakness.”

The woman said her son “was manipulated (by Eichler) into believing it was acceptable (to have a sexual relationship with the teacher).”

“The thought of not being able to protect my son for the first time in 17 years hurt my soul,” she said, her voice intensifying with anger. “I’m his mother, I’m his protector. You were supposed to be looking out for my son but ... you were only looking out for yourself.”

But the mother said she has forgiven Eichler. “The fact remains you are still a mother,” the woman said. “I pray your family can forgive you so you (can be restored). ... Your fate is all in the hands of the almighty God.”