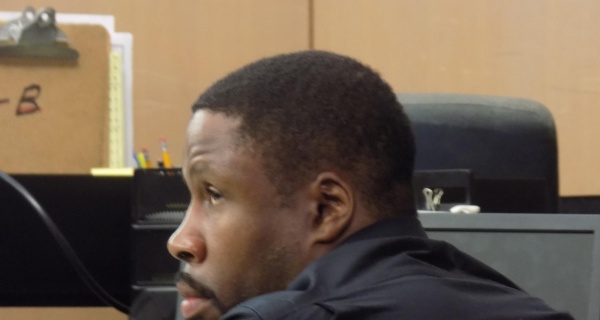 A former Greenacres police officer convicted of failing to inform his sexual partner of his HIV status was sentenced to eight years in prison Friday.

Judge Samantha Schosberg Feuer imposed the sentence Ervans Saintclair during a hearing at the Palm Beach County Courthouse. The sentence came after Saintclair was convicted in April on one count of uninformed HIV sexual intercourse.

During Friday’s hearing, Saintclair apologized for his actions and several family members spoke on his behalf, telling the court that he was a changed person.

“I made some bad choices and because of those choices I’m here,” Saintclair said during the hearing. “I took away a choice from the victim by not giving her the information she needed.”

His attorney, Sam Gershon, asked for a sentence of no more than the minimum of 21 months.

As Feuer made her ruling, she noted Saintclair’s career in law enforcement and said that he had put his accuser’s life in danger.

“Police officers are supposed to uphold the law and he put this individual in jeopardy numerous times,” she said.

Saintclair was arrested in January 2014 after a woman told authorities he failed to disclose his HIV status to her to during an off-and-on sexual relationship between 2009 to 2013.

A mistrial was declared in November after a jury failed to reach a unanimous verdict and the case went to trial again in April.

Saintclair’s accuser, a now 40-year-old U.S. Postal Service worker, testified during the first trial last year and again in April that the two of them had unprotected sex throughout their relationship and at one point were trying to conceive a child.

During the trial, Assistant State Attorney Brianna Coakley presented medical records and testimony from doctors who examined Saintclair, telling jurors the former officer knew he was infected as early as 2007.

At the time of his arrest, Saintclair has worked as an officer for six years with the Greenacres Police Department, which was later disbanded when the Palm Beach County Sheriff’s Office assumed law-enforcement responsibilities for the city.

Saintclair also faces another legal action involving the same woman, plus three charges in connection with the case of a woman who said she had sex with Saintclair between March 2012 and November 2013 without him ever telling her that he was HIV-positive.

A hearing regarding those cases was set for June 26.