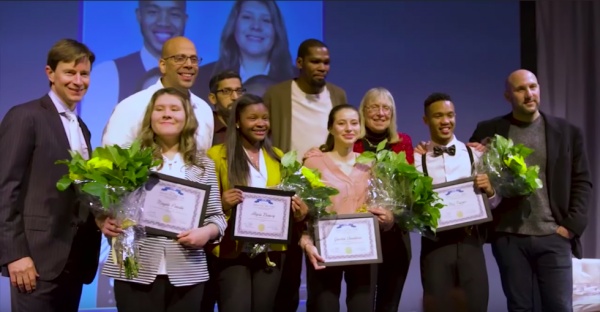 Kevin Durant has a lot on his plate. The free agent is currently in the NBA finals with the Golden State Warriors averaging over 27 points a game (he scored 43 points Wednesday), he co-runs a private equity company that has investments in approximately 30 tech companies, including Postmates and Acorns. He's also one of the most philanthropic athletes in the world.

Durant has long been a controversial figure, most recently for his decision to leave Oklahoma City and accept a $53 million dollar contract with Golden State, but the good work he's done in every community he's been part of can't be denied. The 2014 MVP has committed to giving over $13 million to community causes this year alone.

Now, Durant is helping send four of his mentees from the Boys & Girls Clubs of the Peninsula in Redwood City, California, to college.

Durant first became involved with the local Boys & Girls club in June of 2017. By September, he had built a basketball court for the kids and by February of this year, he surprised four students with an offer to cover their first year of college.

The reveal happened during the Boys & Girls Clubs of the Peninsula's annual Youth of the Year competition, for which Durant served as a judge alongside his business partner Rich Kleiman, journalist Esther Wojcicki, Chan Zuckerberg Initiative President of Education Jim Shelton and Google CEO Sundar Pichai. The event raised $2.5 million that night.

Durant was so impressed with the students — Alysia Demery, Desmond Fraiser, Magali Pineda and Joselin Quinteros — that he offered to cover the first year of college for all of them.

"I grew up in a similar situation," Durant said to ESPN. "They are four kids that have been through so much already in their short lives and to be able to get up the next day and keep pushing, keep trucking, I was very proud just to get to meet them."

The basketball star says that the Boys & Girls Club in his hometown of Washington, D.C. was crucial to his success.

"It connected with me so much because just living in unstable households and moving around to so many different places, not having someone I could lean on and stuff, and then going to the rec center and seeing mentors that helped me and supported me — that was huge," he explains.

Alysia Demery and her family have faced homelessness, her mother struggles with mental illness and her brother has special needs. When Demery heard the good news, she was in shock. "I fell on the ground," she tells ESPN's Chris Connelly. "Just knowing that someone believes in you enough to literally invest in you."

"I just wanted to let her know that anything's possible if you put your mind to it," says Durant. "And I know she has the work ethic to do so."

Desmond Frazier is the youngest of six boys and works at Starbucks to support himself. He plays football, wrestles and runs track. Once, when Durant asked him what he was doing for Christmas, the young man said that he didn't know since he was living in his car.

With Durant's help, Frazier says he feels better equipped to pursue his passions. "I want to serve our community as a civic leader, a mayor, a congressman and eventually the President of the United States," he said at the event in February.

"I was like, 'Wow I can't believe I impressed an MVP,'" says Magali Pineda, a senior at Everest Public High School when she heard about Durant's decision.

Sean Mendy, Vice President of Development for the Boys & Girls Clubs of the Peninsula, calls Pineda an "incredibly mature kid." In the fall, she will attend UC Riverside and plans to study visual arts and Chicano studies with the hopes of pursuing a career that combines technology and social justice.

Growing up, Joselin Quinteros would wake up at 5 a.m. to help her mother who works as a housekeeper. "I remember the big houses that my mom used to clean — like they were so big," she says. "I wanted all of that and I still kind of do."

Durant says he too remembers going to expensive neighborhoods and wanting a better life for himself and his family. "I understand what that's like for her," he says to ESPN.

This mantra led the forward to take a nearly $10 million pay cut so that the Warriors could keep Andre Iguodala and Shaun Livingston and the team could hopefully continue to win titles together.

Durant credits his mother, Wanda Durant, for instilling in him the importance of giving back to others: "I thought giving back was always very important," she said at an event at Thomson Reuters earlier this year, "and so we talked about that and he had seen that from us as a family and it's one of the things that I taught him."