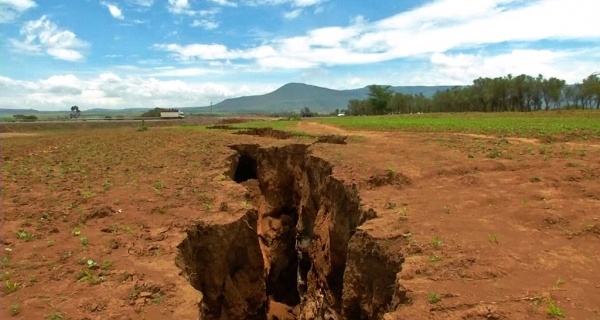 Two sides of Africa are currently going through a breakup.

The earth recently split open in Kenya, creating a miles-long crack that measured more than 50 feet deep and 65 feet across. The event, prompted by heavy rains and seismic activity in the area, provided evidence that Africa could one day split into two continents, National Geographic reports.

The crack appeared suddenly, but the eventual split wouldn't be complete for several millions of years, geologists predict. The tear formed along the East African Rift, a 3,700-mile stretch where two tectonic plates are moving away from each other. In 50 million years or so, this rift could mean that Somalia, Kenya, Ethiopia, and Tanzania could eventually split off from the rest of the continent.

Scientists have known about this possibility for years, but the crack still came as a surprise to Kenyans when it appeared in late March. Part of the Nairobi-Narok highway collapsed, and one witness told Reuters that the earth cracked so quickly that he scarcely escaped his house before it collapsed. One house split in two, Face2Face Africa reports — much to the surprise of the family who was inside eating dinner when it happened.