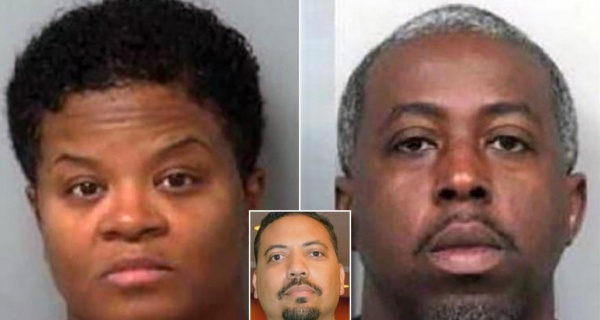 A married mother of three children conspired with her male lover to kill her husband in order to claim a $1million life insurance policy, Atlanta area law enforcement has alleged.

Tia Young, 42, and Harvey Lee, 38, were arrested on Monday by Gwinnett County Sheriff’s deputies for their alleged role in the fatal shooting of her husband, George Young.

Both Tia Young and Lee deny any involvement in the killing.

Last November, George Young, 43, was shot to death on his front porch as he was returning to his Buford, Georgia home from his job as a security guard.

At the time, investigators believed that the shooting was random, according to WSB-TV.

Investigators learned that Lee and the Youngs had known each other for years.

They had all relocated to the Atlanta area from South Carolina.

When Lee became unemployed, George Young invited him to live with their family in Buford, according to WSB-TV.

George Young also arranged a job for Lee at his security company.

On the night of George Young’s murder, investigators grew suspicious of Lee and Tia Young because of inconsistencies in their story.

Authorities said that Lee and Young gave differing accounts of where they found George Young’s body and what time they called 911.

Detectives also learned early in the investigation that Tia Young and Lee were lovers – contradicting their claims that they were really cousins.

The two suspects appeared before a judge on Tuesday, who denied them bond because they are considered a flight risk.

After George Young's murder, a GoFundMe page was set up to help Tia Young and the children.

Marcelo Bump, a neighbor, told the Atlanta Journal-Constitution that he had set up the crowdfunding initiative to help the grieving family.

Others even organized a 'food train' in the aftermath of George Young's murder.

But after it became apparent that Tia Young was alleged to be involved in her husband's murder, the page was removed and donors received a refund.

Bump has put up a new GoFundMe page to help the Youngs' three young boys and their grandmother.

He writes that it will take years for the life insurance policy to be paid out to the children since it would likely happen if and when the mother is found guilty.