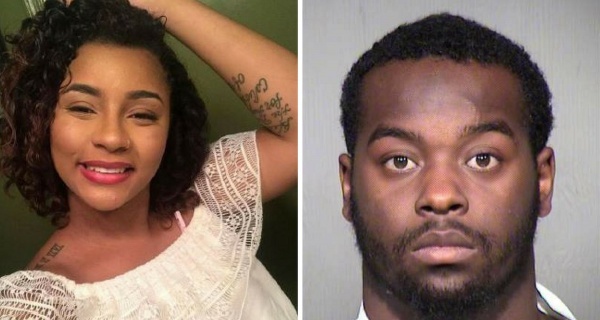 A young mother was last seen with a former boyfriend who is now accused of killing her. She had told two people that they were going to get a paternity test for her baby, Phoenix police said Thursday.

Ware “admitted he had a physical altercation with Jasmine and punched her a number of times with his fist,” police said in a probable cause statement.

According to KTVK, Ware told police Dunbar was still alive when he dumped her body in a field. He then dropped her 7-month-old daughter in a car seat along a street about 4 miles from her mother’s home, police said. He told officers he left her there because, "He saw people nearby and believed they would find her and take care of her."

Ware then returned to where he had dumped the child's mother.

According to the police report, Ware "put a piece of paper on the body and then poured gasoline on her. He then set it afire with a cigarette. Antwaun watched as Jasmine burned and the fire put itself out."

"Why would you go back? To kill her? For what? Because she asked you to take a DNA test?" Dunbar's mother Tonya Smith said.

Another ex-boyfriend of Dunbar’s and her godmother separately told police that they last saw Dunbar leaving her apartment with Ware and that she said she and Ware were going to do the paternity test, the document said.

Dunbar and Ware left the apartment she shared with her godmother about an hour before the infant was found with a diaper bag and Dunbar’s backpack, which contained her wallet and ID, according to the probable cause statement.

“Jasmine was never seen or heard from again,” it said.

Ware was jailed on suspicion of first-degree murder, kidnapping, abandonment of a body and child abuse. His bond was set at $1 million Thursday.

A GoFundMe account has been created to pay for Dunbar's funeral and to help care for her daughter.