Kevin Durant: His Business Ventures Are Motivating His Peers 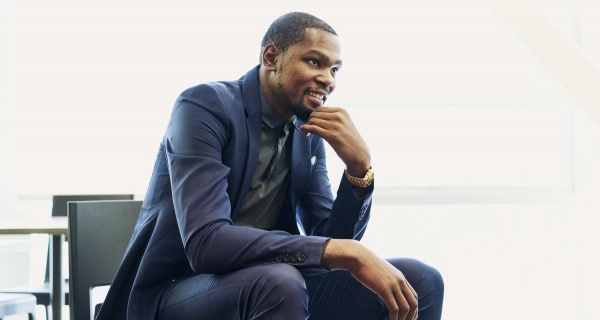 Kevin Durant loves basketball. When he isn’t playing it, he’s often watching it or talking about it. He’s not one of those NBA players who was pressured into picking up a basketball at a young age because they were tall and stuck with it for the money. He’s really passionate about this game and, despite his off-court endeavors, he considers himself a hooper first and foremost.

In fact, when asked about his success in the business world, he downplays his involvement, pointing out that he has mainly stayed in his lane and hired the right people around him.

“I know I’m just a basketball player, so I was smart enough to hire people who are really good in that field,” Durant told HoopsHype with a laugh. “I can’t take all of the credit for that. I have such a great team of people around me who have pushed me to explore that field and learn more about it because, like I said, I’m just a basketball player. That’s what I do and I usually don’t want to do anything else. I’m happy when I’m playing basketball. But I have to give a ton of credit to the people who forced me to think outside of the box a bit because it’s changed my life and made my life more interesting. It’s not for every basketball player and it doesn’t always turn out this way, but for me, it was a natural progression and things really worked out.”

Durant isn’t lying about his off-court ventures really working out. He has been very successful with his investments and partnerships, which is something that most people don’t know about the former MVP. In fact, even many of the players who raved about Durant and talked about looking up to him knew very little about his business endeavors. Just as KD is willing to share his hoop knowledge with younger players, he believes he has something to offer the next generation when it comes to thriving away from the game as well.

“That’s another area where I feel like I have so much knowledge that I want to give out to the youth and to whoever wants it,” Durant said. “I’ve learned so much from the people around me and I can pass that on, so that people can use that knowledge and they don’t have to figure out some of these things the hard way.”

Since joining the Golden State Warriors, Durant has taken advantage of his proximity to Silicon Valley. He has developed friendships with higher-ups at large tech and media companies. He has also put a team of people around him to make smart investments in start-ups and form strategic partnerships with various brands. He launched Durant Co. with his manager and business partner Rich Kleiman (pictured above) and they have been busy.

As of October of last year, Durant Co. (which is run by Durant and Kleiman) had invested in over 30 companies including an on-demand car care start-up called Yoshi, an autonomous drone start-up called Skydio, a cloud data management start-up called Rubrik, a mobile marketplace for private charter flights called JetSmarter, the food-delivery service Postmates and the microlender Acorns among others.

They also invested in a venture capital firm called CerraCap Ventures – which finds early-stage investments for start-ups in the cybersecurity, artificial intelligence, and digital health fields – as well as numerous restaurants, from an upscale New York eatery to the pizza chain Pieology.

Durant and Kleiman also started an entertainment company called Thirty Five Media, which focuses on television and film development. They struck a deal with YouTube to develop sports programming (including channels dedicated to individual players). Apple recently announced that they are developing a scripted television show that’s based on Kevin’s upbringing, with Thirty Five Media and Imagine Entertainment producing the series (Durant and Kleiman are executive producers). The show will be called “Swagger” and in addition to focusing on Durant’s experiences as an up-and-coming phenom, it will also explore the world of AAU basketball.

One of Durant Co.’s biggest projects as of late was in Overtime, which is an app that features highlights of top high school athletes. Not only did Durant and Kleiman invest nearly $10 million into Overtime, Durant is going to be involved with the company going forward. On his YouTube channel, he posted videos of him giving scouting reports on top high school players and it seems he’ll continue to create content that promotes Overtime moving forward.

“We’re pumped to work with KD,” said Zack Weiner, the co-founder of Overtime. “It’s important that our audience sees Overtime as trendsetting. In the basketball world, both on and off the court, KD is the ultimate in that regard.”

It’s clear that this particular investment and partnership is important to Durant.

“I just want to help young players,” Durant said. “I want them to see the vision and I want them to know that they have support from guys who are in the place where they eventually want to be. I think that’s key. I felt like investing in Overtime and being involved with it could be my way of giving those young players support and letting them know that I have their backs. Hopefully, we see a good number of those guys come into the NBA, become franchise-changing players, make a lot of money and change their lives in the process. With everything I do on Overtime, it’s my way of saying to the young players, ‘I support you guys, keep working and hopefully I see you guys up in the league soon.’ That’s the message I want to send.

“I think the best part is that it gives some of these [under-the-radar] kids exposure, especially the ones in some of these smaller markets where not a lot of people go to watch them play. Exposure is the No. 1 thing they need right now, so hopefully, this gets them noticed. And, like I said, I’m really hoping to change some of these kids’ lives. That’s the plan.”

Kleiman raved about Durant’s ability to connect with anyone, whether it’s a young player, a tech CEO or a random stranger on the street.

“There’s something about how approachable he is and relatable he is,” Kleiman said. “He’s one of the most gifted, unique athletes of any generation – 7-feet tall with a handle like a point guard, who can stop on a dime and hit a one-legged, fadeaway three – and the things he does are insane. But he has these very relatable traits, so when you interact with him right after a game, or before a game, or in the media room, or on social media or wherever, you feel like he’s just like you.

“I think that relatability has actually translated to the business world and helped him there too because when he’s met the founders of these tech companies and CEOs of the biggest media companies in the world out in Silicon Valley and Los Angeles, he has an incredible connection with them and relates with them and looks at everything in a practical way.”

There has been some talk about LeBron James and Durant competing in the business world, just as they do on the court. They have invested some similar companies, which led to speculation that their rivalry extends off the court. However, Kleiman is quick to praise James’ business acumen and admits that Durant Co. follows the LeBron blueprint to some extent.

“All of the amazing athletes who succeeded in business – from Magic Johnson to Michael Jordan to LeBron James – brought something different to the table and they continued to evolve and learn from those before them,” Kleiman said. “LeBron laid out such a great blueprint: He looked at brand deals differently, he valued quality over quantity and he realized that athletes of this caliber are global brands so they should have equity in these businesses. Kevin learned so much from LeBron. Now, Kevin is building his own business in his way, and he will evolve, bring something new to the table and inspire the people after him.”

Many players believe that just as Durant influenced many young players on the court, he and LeBron could do the same off the court.

“I think the next generation will see what Kevin is doing off the court and be influenced by that too,” Adonis Thomas said. “They see that guys like Kevin and LeBron are investing in companies, innovating and doing great things business-wise. I think the next wave of players will want to do the same thing and just piggyback off of what they saw guys like Kevin and LeBron do. I think those guys will make future players aware that they can be business-oriented while they’re still playing.”

“Seeing all of his off-court projects and everything he’s involved definitely motivates me,” Phoenix Suns point guard Elfrid Payton said. “It makes me want to get more involved in different businesses.”

“The goal is always to have success beyond basketball, so when you see guys like KD and LeBron who are having all of this success away from the game, it’s proof that you can do it,” Cleveland Cavaliers forward Larry Nance Jr. said. “There are so many stories about guys who go broke after they’re out the league, so it’s really cool to see these guys being such positive role models and doing such great things off the court. I didn’t realize he had done all of that, but that’s great.

“That’s the definitely the mark that every player is aiming for when you’re done playing… Or, in his case, before you’re even done.”