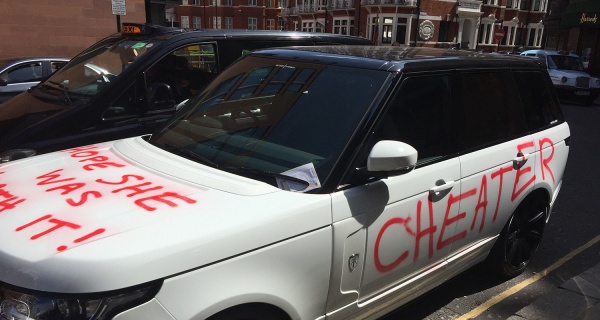 A seething girlfriend threw a glass of water on her boyfriend and chased him to his car after catching him enjoying a date with the woman she hired to seduce him.

On the latest episode of the popular YouTube series To Catch a Cheater, Monica tested her boyfriend's devotion after more than a year together. A hidden camera caught him flirting with actress Jaymi Westra, who was coming on to him while Monica was 'running late' for their date.

Unfortunately for Monica, her boyfriend didn't just flirt with Jaymi Westra, he asked her to go out on a date with him after telling her he didn't have a girlfriend.

Ironically, at the start of the clip, Monica couldn't stop gushing about her 'amazing' boyfriend, explaining that he always opens doors for her and surprises her with her favorite foods.

Monica's boyfriend was under the impression that she was running 20 minutes late to meet him when Jaymi sauntered up to him in a low-cut jumpsuit, looking incredibly distraught.

Jaymi explained that she was supposed to have a date with a guy she met on Tinder, but he had stood her up. The two started chatting and Jaymi cooed he reminded her of the R&B singer Ray J.

'He does not look like Ray J,' Monica griped while watching the footage. 'Look at how close their legs are, and she is just flirting with her boobs all in his face.'

Jaymi was the first to suggest that they should get together some time, but Monica's boyfriend quickly agreed.

They exchanged numbers, and he joked that he was meant to be her date — not the guy who failed to show up.

'A guy like you must have a girlfriend,' Jaymi gushed, but he said he didn't, claiming it was 'hard' to find one.

Monica was horrified as she watched her boyfriend walk Jaymi to her car and give her a hug, knowing that she could have shown up at any minute.

'What if I came up there, and he was walking some random bimbo to her car?' she asked. 'We were supposed to be on a date! Can you imagine? I could have walked in at any time.'

'I could have attacked him and went to jail,' she added.

In addition to being furious about her boyfriend's actions, Monica was also angry that the poor audio on the video failed to catch the bulk of his conversation with Jaymi.

Luis Mercadom, the host of the YouTube series, explained that Jaymi had given her boyfriend his phone number, and they had been texting. He offered to set up a second sting, so Monica could really catch her boyfriend in the act.

While pretending to be Jaymi, Luis made plans with Monica's boyfriend for that Friday. When she texted him to see what he was doing that night, to see if he would come clean, he lied to her and claimed to be helping his brother move.

Later, when her boyfriend went to meet Jaymi for dinner, Monica gave them some time to get settled at their table before confronting them.

Shockingly, Monica's boyfriend remained incredibly calm when she walked up to them at the restaurant.

Monica grabbed a glass of water from the table and thew it on him before storming out, but that didn't even faze him.

Jaymi finally came clean and told him that Monica was her friend, explaining that she was asked to come on to him to see what he would do.

'What the f**k are y'all playing me like that for then?' he asked, before getting up to leave.

Monica was waiting outside the restaurant for him, and he screamed at the cameramen to stop filming him.

His girlfriend hit back that he should be worried about her, not the cameras, and she continued to chastise him while he walked to his car.

Monica screamed that he didn't even have a job, pointing out that he couldn't pay for her to get her nails done, yet he was taking a random woman out to dinner.

He actually started to run away, but Monica chased after him.

The footage of them ended when Monica climbed on to his car and started attacking him through the open sunroof.