Alcohol Vs. Marijuana: A Look At The Effects Of Both 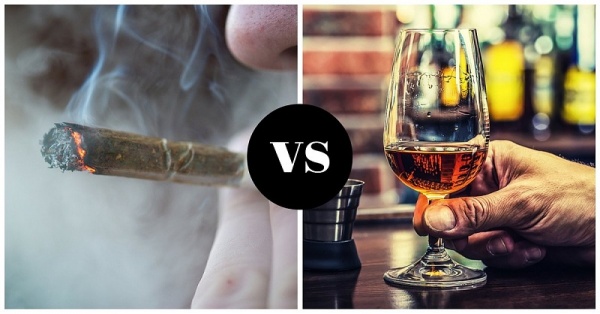 Which is worse for you: weed or whiskey?

It's a tough call, but based on the science, there appears to be a clear answer.

Keep in mind that there are dozens of factors to account for, including how the substances affect your heart, brain, and behavior, and how likely you are to get hooked.

Time is important, too — while some effects are noticeable immediately, others only begin to crop up after months or years of use.

The comparison is slightly unfair for another reason: While scientists have been researching the effects of alcohol for decades, the science of cannabis is a lot murkier because of its mostly illegal status.

In 2014, 30,722 people died from alcohol-induced causes in the US — and that does not count drinking-related accidents or homicides. If those deaths were included, the number would be closer to 90,000, according to the Centers for Disease Control and Prevention.

Meanwhile, no deaths from marijuana overdoses have been reported, according to the Drug Enforcement Administration. A 16-year study of more than 65,000 Americans, published in the American Journal of Public Health, found that healthy marijuana users were not more likely to die earlier than healthy people who did not use cannabis.

Marijuana appears to be significantly less addictive than alcohol.

Close to half of all adults have tried marijuana at least once, making it one of the most widely used illegal drugs — yet research suggests that a relatively small percentage of people become addicted.

For a 1994 survey, epidemiologists at the National Institute on Drug Abuse asked more than 8,000 people from ages 15 to 64 about their drug use. Of those who had tried marijuana at least once, roughly 9% eventually fit a diagnosis of addiction. For alcohol, the figure was about 15%. To put that in perspective, the addiction rate for cocaine was 17%, while heroin was 23% and nicotine was 32%.

Marijuana may be harder on your heart, while moderate drinking could be beneficial.

Unlike alcohol, which slows your heart rate, marijuana speeds it up, which could negatively affect the heart in the short term. Still, the largest-ever report on cannabis from the National Academies of Sciences, released in January, found insufficient evidence to support or refute the idea that cannabis may increase the overall risk of a heart attack.

On the other hand, low to moderate drinking — about one drink a day — has been linked with a lower risk of heart attack and stroke compared with abstention. James Nicholls, a director at Alcohol Research UK, told The Guardian that those findings should be taken with a grain of salt since "any protective effects tend to be canceled out by even occasional bouts of heavier drinking."

Alcohol is strongly linked with several types of cancer; marijuana is not.

In November, a group of the nation's top cancer doctors issued a statement asking people to drink less. They cited strong evidence that drinking alcohol — as little as a glass of wine or beer a day— increases the risk of developing both pre- and postmenopausal breast cancer.

The US Department of Health lists alcohol as a known human carcinogen. Research highlighted by the National Cancer Institute suggests that the more alcohol you drink — particularly the more you drink regularly— the higher your risk of developing cancer.

For marijuana, some research initially suggested a link between smoking and lung cancer, but that has been debunked. The January report found that cannabis was not connected to any increased risk of the lung cancers or head and neck cancers tied to smoking cigarettes.

Both drugs may be linked with risks while driving, but alcohol is worse.

A research note published by the National Highway Traffic Safety Administration (PDF) found that, when adjusting for other factors, having a detectable amount of THC (the main psychoactive ingredient in cannabis) in your blood did not increase the risk of being involved in a car crash. Having a blood-alcohol level of at least 0.05%, on the other hand, increased that risk by 575%.

Still, combining the two appears to have the worst results.

Several studies link alcohol with violence, particularly at home. That has not been found for cannabis.

It's impossible to say whether drinking alcohol or using marijuana causes violence, but several studies — including a recent analysis published in the journal Cognitive, Affective, and Behavioral Neuroscience— suggest a link between alcohol and violent behavior.

For a study published in January, researchers used fMRI scans to see how two alcoholic drinks impacts brain function in 50 healthy adult males. Compared with sober participants, the intoxicated volunteers were found to have reduced functioning in the prefrontal cortex, an area of the brain linked with moderating social behavior. That reduced functioning was also linked with aggressive behavior.

The finding aligns with some previous research on alcohol's connections with violence. According to the National Council on Alcoholism and Drug Dependence, alcohol is a factor in 40% of all violent crimes, and a study of college students found that the rates of mental and physical abuse were higher on days when couples drank.

On the other hand, no such relationship appears to exist for cannabis. A recent study looking at cannabis use and intimate partner violence in the first decade of marriage found that marijuana users were significantly less likely to commit violence against a partner than those who did not use the drug.

Both drugs negatively affect your memory — but in different ways. These effects are the most common in heavy, frequent, or binge users.

Both weed and alcohol temporarily impair memory, and alcohol can cause blackouts by rendering the brain incapable of forming memories. The most severe long-term effects are seen in heavy, chronic, or binge users who begin using in their teens.

Studies have found that these effects can persist for several weeks after stopping marijuana use. There may also be a link between daily weed use and poorer verbal memory in adults who start smoking at a young age.

Chronic drinkers display reductions in memory, attention, and planning, as well as impaired emotional processes and social cognition — and these can persist even after years of abstinence.

Both drugs are linked with an increased risk of psychiatric disease. For weed users, psychosis and schizophrenia are the main concern; with booze, it's depression and anxiety.

The largest review of marijuana studies found substantial evidence of an increased risk among frequent marijuana users of developing schizophrenia — something that studies have shown is a particular concern for people already at risk.

Weed can also trigger temporary feelings of paranoia and hostility, but it's not yet clear whether those symptoms are linked with an increased risk of long-term psychosis.

On the other hand, self-harm and suicide are much more common among people who binge drink or drink frequently. But scientists have had a hard time deciphering whether excessive alcohol use causes depression and anxiety or whether people with depression and anxiety drink in an attempt to relieve those symptoms.

Alcohol appears to be linked more closely with weight gain, despite weed's tendency to trigger the munchies.

Weed gives you the munchies. It makes you hungry, reduces the natural signals of fullness, and may even temporarily make food taste better.

But despite eating over 600 extra calories when smoking, marijuana users generally don't have higher body-mass indexes. In fact, studies suggest that regular smokers have a slightly reduced risk of obesity.

Alcohol, on the other hand, appears to be linked with weight gain. A study published in the American Journal of Preventative Medicine found that people who drank heavily had a higher risk of becoming overweight or obese. Plus, alcohol itself is caloric: A can of beer has roughly 150 calories, and a glass of wine has about 120.

When it comes to addiction profiles and risk of death or overdose combined with ties to cancer, car crashes, violence, and obesity, the research suggests that marijuana may be less of a health risk than alcohol.

Still, because of marijuana's largely illegal status, long-term studies on all its health effects have been limited — meaning more research is needed