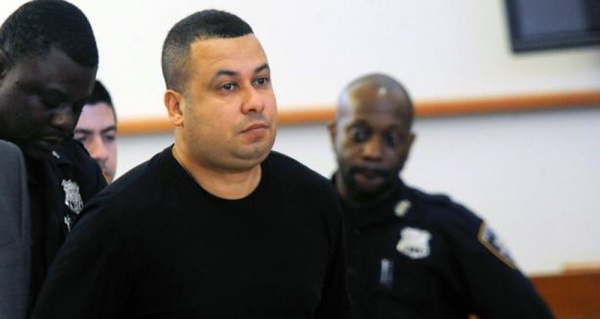 Detectives found a series of salacious videos and photos on Police Officer Raul Olmeda’s home computer, along with a creepy PowerPoint presentation of other women with whom he had sex — a compilation he called “The List,” according to department lawyers who want him fired.

The evidence against Olmeda, 40, was presented Wednesday during his departmental trial — which will determine whether he remains a cop or gets kicked off the force.

He also faces felony charges in Bronx Criminal Court for sex with a minor and possession of a sexual performance of a child.

Usually, departmental trials are usually not held until a criminal case has concluded.

In one of the most notable examples of this practice, the NYPD has repeatedly maintained that departmental charges against chokehold cop Daniel Pantaleo — accused of killing Staten Island dad Eric Garner — will not be filed until the Department of Justice concludes its investigation.

Lt. John Grimpel, a police spokesman, said prosecutors did not object to the NYPD moving forward with the disciplinary case against Olmeda — which focuses on the child pornography charges in the case, not the rape.

The NYPD Department Advocate’s Office, which prosecutes police misconduct within the department, is pushing for the firing of Olmeda. The underage teen he is accused of having sex with was a runaway who ended up becoming a prostitute.

When the Internal Affairs Bureau learned about the suspected sexual encounters, it alleged Olmeda tried to convince the teen to stop talking to authorities — and also tried to access NYPD computer files to get updates on the case against him.

“(Officer Olmeda) has engaged in behavior that is not acceptable in any manner and he should not continue in his role as a police officer,” a prosecutor for the Department Advocate’s Office said.

The four-year NYPD veteran is currently suspended. He was arrested last Oct. 11 for having sex with the minor, identified as his girlfriend’s sister.

According to Lt. Euclides Lopez, the lead investigator on the case for IAB, Olmeda managed to convince his girlfriend to have a three-way with him and her sister, then paid the underage teen for sex at least eight other times, giving her between $140 and $200 for each tryst.

The teen told police of her relationship with Olmeda after she was arrested for prostitution.

“She provided us with a phone number of one of her clients that was a police officer,” Lopez said. “We ran the phone number and it came back to Olmeda.”

“She said she had sex with (Olmeda) about eight to 10 times,” Lopez said. “He would videotape and record every time they had sex.”

Olmeda knew she was underage, the teen told police. A forensic dive into the cop’s desktop computer, USB drives and cell phone turned up 16 photos of the teen either naked or having sex with Olmeda — along with at least 19 videos of the cop having sex with the teen and a handful of other women, investigators said.

Cops also found his Dropbox containing three folders — one contained three more lurid pics of the teen. The other two were labeled “The List” and “My Investigation.”

The “My Investigation” folder contained audio files of Olmeda trying to convince the teen not to talk to authorities.

He told her if he got in trouble, so would her sister, who put them together in the first place, Lopez said.

“The List” was a collage of women he also bedded, officials said.

Olmeda’s lawyer, Stewart London, said all of the charges stem from the teen, who he said lied about her relationship with the cop in the hopes of a payday down the line.

“All of these charges rest on one linchpin — the credit of one woman,” London said. “This case is plain and simple — it’s a money grab.”

The teen’s father also pressured her to lie about her relationship with Olmeda, London charged.

“When he realized he had the ability to arrest a police officer, all he saw was money signs,” London said.

Olmeda, who is currently out on bail, is due back in Bronx Criminal Court on the felony charges May 1.