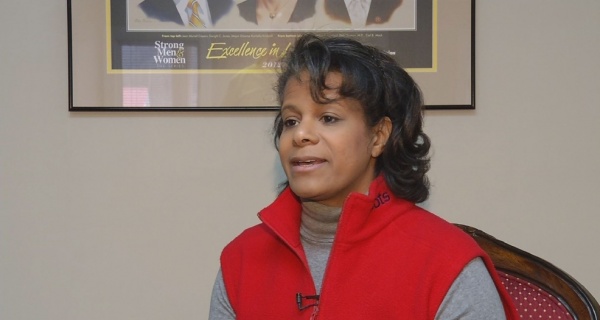 Thirty years ago Debi Thomas basked in the glory of making Olympic history — the first black athlete to ever win a medal at the winter games.

Today, the pioneering figure skater can’t even tell you where that bronze medal is. It’s now owned by the bank.

“I lost it to bankruptcy,” Thomas revealed in a two-hour interview with The Post. “They can take away the medal, but they can’t take away the fact that I won it.”

Three decades ago Thomas was an American household name, fiercely competing against her icy rival, East Germany’s Katarina Witt, in the Cold War “Battle of the Carmens.”

Both athletes skated to Bizet’s opera “Carmen” during the much-watched event in Calgary, Canada. Thomas ultimately took home the bronze and Witt snagged the gold because of a misstep during Thomas’ free-skate.

But Thomas won the hearts of viewers because of her can-do spirit, her athleticism, and her unmatched smarts. While she trained for the Olympics, she simultaneously pursuing a pre-med degree from Stanford University, an unusually demanding path for Olympic athletes of that era.

Now, on the 30-year-anniversary of her rise to international fame — and three years after she publicly spoke out on a reality TV show about being bankrupt, bipolar, losing her surgery practice, and living in a bug-infested trailer — Thomas still struggles to make ends meet. But she has no regrets.

“It may look [to] people on the outside like it’s insane, but I don’t care,” said Thomas, 50, who lives with her fiancé Jamie Looney in that same mobile home in Richlands, Va. “I don’t care about living in a trailer. People are so obsessed with material things, but I only care about knowledge.”

Today, Thomas’ passions have shifted from skating and medicine to practicing hypnosis, selling tiny pieces of gold for a company called Karatbars and writing her autobiography called “In Right Light it Looks Gold.”

She doesn’t have a bank account and hasn’t made a steady income in years.

“I always know that sometimes if you want to be a visionary, you’re going to have to commit to that and you may go through some financial struggles,” she explained.

Karatbars takes up a majority of Thomas’ time these days, because of the difficulty explaining the business to potential recruits.

“It takes people a while to get it and really go down that rabbit-hole,” she said.

She also earned her certificate in Quantum Healing Hypnosis Technique, which she uses to hypnotize subjects to cure them of ailments. Thomas said it’s “not hocus-pocus.” So far she has attempted the mind-control technique on three people.

After eight years as an orthopedic surgeon, Thomas has come to despise the medical profession, which she says is controlled by the government and insurance companies. She hasn’t had a check-up in 20 years.

The ground-breaking athlete’s life began to unravel six years ago.

On April 22, 2012, Thomas — who lived in an apartment in Richlands — and Looney had a fight outside his trailer, the Washington Post reported.

She shot off a gun in the yard to scare her boyfriend. When the police arrived, she approached an officer and told him she wanted to harm herself with a gun.

After being detained and given a psychological evaluation, she was diagnosed as bipolar.

As a result of the diagnosis and falling behind on bill payments, Thomas was forced to close her private orthopedic practice. By 2014, she was unable to make rent. She was $600,000 in debt when she filed for bankruptcy.

Several years later, her bronze medal — worth about $2,200, according to Radar Online — was taken from her.

“I felt for Jamie because I could see it was breaking his heart, but I said, ‘That medal … I don’t even put it out. It was just sitting in a box somewhere,” said Thomas, who is twice divorced and has a 20-year-old son named Luc.

Looney has his own struggles. He’s battled an on-and-off addiction to narcotics for years. “He has good days and bad days,” she said.

Thomas vehemently denies that she’s bipolar today, and says she strongly against taking any kind of medication.

She’s also couldn’t care less about skating, and has no plans to watch the Winter Games in Pyeongchang, South Korea.

“I got really detached from skating,” said Thomas, who will instead be leading seminars in Cleveland, Ohio about Karatbars. “People who are still so focused on my skating career, I’m just like, ‘Come on, that was thirty years ago. Why does it matter?”

Winning that historic bronze medal, it turns out, wasn’t a special experience for Thomas.

“I’m not proud of how I performed in the Olympics at all,” she said. “The biggest disappointment isn’t that I didn’t win the gold, it’s that I didn’t skate my best.”

“The difference between Olympians and average people is that we’re willing to do things that others aren’t,” she said. “We’re willing to look at something and do that work, no matter how long or hard.”

Though the two “Carmens” haven’t spoken since their showdown 30 years ago, Thomas wants to change that.

“I’ve been trying to get up with Katarina because I’d love to talk to her,” she said. “Even though we were made out to be rivals, I have nothing but respect for her.”