The Truth Behind Meat Glue 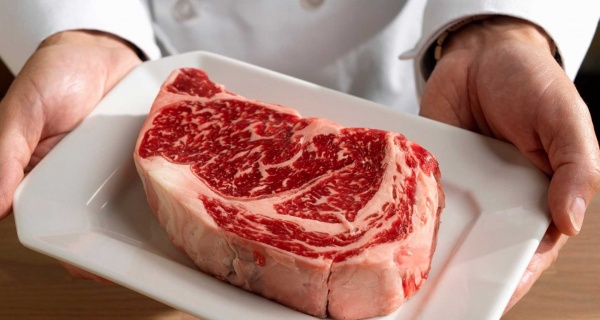 Have you heard of meat glue yet? It has created a great deal of hype and hoopla among the consumers of meat and in the meat industry as well.

According to the estimate of the American Meat Institute around 8 million pounds of meat in the United States are added with the meat glue each year.

But what is meat glue? And why this fact is so alarming?

Overall, a consumer even a meat expert cannot tell the difference between the real premium cut or glued large chunk of meat.

Certainly, it is impossible for you to differentiate while buying from a supermarket that the piece you are choosing is coming from the real meat or not.

When this remarkable fact come into the notice of the general public they deliberately want to avoid this glue stuff from their consumption but could not find the right way, which is why I am going to give you all the information you need to know and also the way to avoid meat glue from consumption.

What Is Meat Glue?

Transglutaminase or Meat Glue is an enzyme which naturally occurs in plants, animals and in the human body. Its main function is to bind protein together.

According to physician Michael Greger, earlier the main commercial source of transglutaminase (TG) was the liver of the guinea pig. But to cut costs now this white powder is availed by the retailers from the cultivation of bacteria or from the blood plasma of the pigs and the cattle, specifically from the coagulant which results in the clotting of blood.

So basically what meat glue is made of is nothing but an enzyme that helps to bind proteins together.

What Are The Functions Of Meat Glue?

Other than binding the protein, according to AMI, the TG or meat glue is in the USA is used to improve the texture, shape and control the amount of meat in certain foods. It can also thicken egg yolks, dairy products, strengthen dough mixtures and improve the yield in tofu production.

Cleary meat glue in the USA has many functions in the food industry and not only the meat industry but other food industries also include TG in their products.

This indicates that how blind we are about selecting food products and unaware of the important facts like what a meat glue is.

How The Meat Glue Is Used To Bind Scrap Meats?

Those retailers who use meat glue in their meat on a continuous basis are unlikely to sell any of the prime cuts pure. So basically they will ground all the meats in small pieces and then add the meat glue in its powdered form with the raw meat.

After that they mix them properly and to make meat glue steaks or fake steaks, they roll the meat in the plastic films and refrigerate it for nearly 6 hours.

That is all it takes to make fake glue steaks and sell to the consumers. Clearly, it is very much cost effective for the sellers to make such glued prime cuts, which the consumers buy unknowingly.

Is There Any Regulation In Using Meat Glue?

Yes, there is a regulated amount of usage by the Food and Drug Administration (FDA) which is 65 parts per million of the total product weight with which the TG is going to mix. Exceeding this amount can be dangerous.

I have earlier given you the information regarding what meat glue is; therefore it is clear that it is an enzyme that is already present in our body to bind proteins.

But now the question arises, it is safe to consume from outside? According to the Food and Drug Administration (FDA) TG is generally recognized as safe and the United States Department of Agriculture has determined that meat glue is safe for use in meat products.

But the usage must be in a limited amount as exceeding that can cause food poisoning too many. Other than that the meat scraps react with meat glue because of the bacterial presence in them which may cause you food poisoning.

How TG Reacts with Your Meat?

The discarded leftovers of the meat are heavily induced with several bacteria. One such bacterium is the E. coli. 0157:H7 which you can actually see, with the help of a microscope along the glue line where the meats are enzymatically attached.

While keeping the scraped meats glued, the E. coli. founds its way into the meat and contaminates the fresh piece which results in food poisoning. Also, people who suffer from celiac diseases can get affected by TG as it has the capability to function as an autoantigen which is capable of inducing an autoimmune reaction.

Overall, not only consuming unregulated amount is dangerous but also not cooking your meat properly can affect your health condition.

How To Avoid Consuming Glue In Meat?

As unlike overseas, the United States hasn’t generated any ban on the usage of transglutaminase, the meat industry is using it with free will because of the amount of revenue they can generate by this process.

You can avoid meat glue from consuming in 3 ways.

*Checking The Labels: Certainly, this is unlawful or illegal to trick a buyer by selling glued scrap meats instead of real premium meat but the truth is they are selling those under labels.

Yes! If you read the labels of the glued meats then you will see that the retailers have mentioned the usage of TG. Only because you are unaware of the fact that what meat glue is, you totally ignored the label previously.

But if there is any packed meat inside your refrigerator right now, do check the labels and look for TG. Also, next time onwards don’t forget to have a look at the labels of your meats.

*Try To Separate The Pieces: Another way to confirm if your meat is free from meat glue or not is to try to separate the meats from each other while they are still in raw form because after cooking you can hardly differentiate. If the meats separate easily without slicing then surely they are added with meat glue.
Cooking The Meat Properly: As the microbial properties in the scrap meat penetrate in the interior meat while glued, cooking the meat properly can only save your meat from contamination and you from food poisoning.

Wrap Up: After knowing what meat glue is, it is unnatural for any consumer to accept it in their meat, but unfortunately as this enzyme is not yet banned in the United States, retailers are using it in other food products also. So before buying any food product make sure you are checking the labels for meat glue or TG.