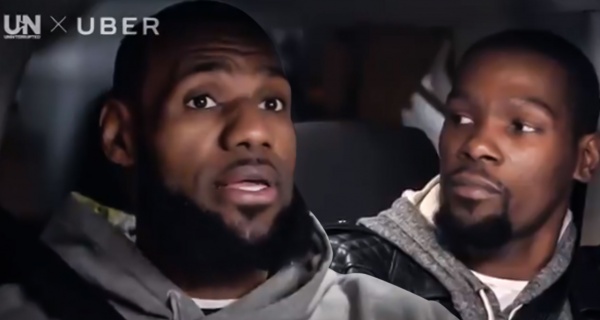 Cleveland Cavaliers forward LeBron James said in a video posted Thursday that President Donald Trump doesn't "give a (expletive) about the people."

James, who previously referred to Trump as a "bum" on Twitter, made the comments in a video piece that was shot last month for UNINTERRUPTED, a multimedia platform that he co-founded.

In the piece, the four-time NBA MVP and Golden State Warriors star Kevin Durant were asked by ESPN's Cari Champion about political division in the United States and the climate that athletes face when trying to speak out.

"Well, the climate is hot," James said. "The number-one job in America, the appointed person, is someone who doesn't understand the people. And really don't give a (expletive) about the people."

James explained that, as a child, there were three high-profile people from whom he sought inspiration: The best athlete, the greatest musician and the president.

"You never thought you could be them, but you can grab inspiration from them," James continued. "I never felt I could be the president of the United States, but I grabbed inspiration from that. And this time right now, with the president of the United States, it's at a bad time. And while we cannot change what comes out of that man's mouth, we can continue to alert the people that watch us, that listen to us, (that) this is not the way."

The 33-year-old James, who is among the most recognizable athletes in the United States, has not been shy about criticizing Trump since he took office last year.

In the wake of violent protests in Charlottesville, Va., in August, James referred to Trump as the "so-called president" and the need to unify as a country without him. One month later, at Cleveland's media day, he spoke at length about his frustration with Trump's rhetoric and referred to the president as "that guy." Then, during a December game in Washington, he wore one white shoe and one black shoe with the word "Equality" on the heel.

"Obviously, we know where we are right now. We know who’s at the helm," James said when asked about the shoes.

James, who supported Democratic nominee Hillary Clinton in the 2016 presidential election, has been one of several prominent NBA figures to denounce Trump over the past year. Steve Kerr of the Warriors, Gregg Popovich of the San Antonio Spurs and Stan Van Gundy of the Detroit Pistons have been among the most vocal coaches with their criticism, in addition to several players.

Durant, for example, said he would not visit the White House after the Warriors won the NBA title because "I don't respect who's in office right now." (Teammate Stephen Curry also later said he wouldn't go, and Trump responded by uninviting the team.)

"When we're talking about leadership, and what's going on in our country, it's all about leadership. And I learned that playing basketball," Durant said in the UNINTERRUPTED piece. "I learned a lot of life skills from playing basketball. You need to empower people, you need to encourage people. And that's what builds a great team. And I feel like our team, as a country, is not ran by a great coach."

Added James: "It's not even a surprise when he says something. It's like laughable. It's laughable and it's scar