A Breakdown On The Top Five Dating Sites 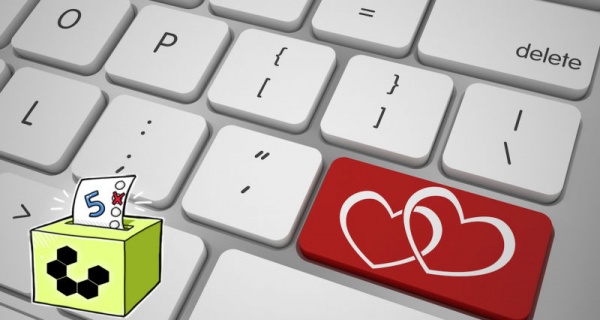 Ah, online dating. If you've dated in the past 20 years, you've likely encountered one – or all – of the myriad dating sites in some form.

And as we've increasingly moved our lives online, digital dating's finally shed the stigma it once carried, leaving people free to meet others however they choose.

Julie Spira, dating expert, and CEO of cyberdatingexpert.com says it wasn't always so easy to meet people online. She would know: she's been helping clients find love online since 1994.

"People didn’t have mobile phones and laptops, and the process was people would go home, log on slowly, see who had written to them and write back," she says. "The courtship process was a lot slower, so it took quite a while to get from the first interaction to actually going on a date. Plus in those days, there was a stigma associated with online dating. You did not tell people you met your spouse, or partner, or even a date online."

As we've changed, so has the online dating landscape. In the years since their initial launches, the forefathers of dating sites have forged ahead on mobile while holding on to their desktop roots.

1. Best for all kinds of daters: Match

Before there were apps on which one could swipe right and left on a dizzying number of potential connections, there was Match. Yes, Match.com is the mother of all dating sites. Launched back in 1995, its decades in the business help it brings a ton of insight to the table for singles looking for all kinds of connections.

And with its more recent push into mobile come a few new features that have helped make the ancient site more relevant, including its very own version of Stories, popularized by Snapchat and, uh ... adopted by everyone else.

Match users can shoot little videos of their day or add voiceovers to photos and post them to their profiles for other users to check out.

*It's technically free to build a profile and browse for matches, but users who want to engage in direct messaging with their matches will have to upgrade to a paid membership, which costs on average about $20 per month. There's also a free trial option.

*Match users can browse on a desktop and on mobile through its app.

*Spira says it "spans a lot of different relationship types," from casual to serious.

2. Best for the opinionated: OkCupid

On OkCupid, users can offer a ton of information about themselves through the site's Match Questions. Examples include: "Would you date someone who keeps a gun in the house?" or "Should the government requires children be vaccinated for preventable diseases?" The answers to these questions help OkCupid determine which members might be a good match for one another.

Of note: Per OkCupid's own stats, liberal women, in particular, have luck on the site. And in 2017, the site offered users the chance to answer 50 "current events" questions that illuminate a user's politics.

"OkCupid has been a favorite of mine for years," Spira says. "I always liked OkCupid because they have a great critical mass and they have the thought-provoking questions that really allow you to think about how you feel about some of these issues, whether it’s politics or gun control, and how do you feel about your date’s answers. People spend a lot of time on site just perusing the questions that other people answer, and I like that. "

*OkCupid is free for the most part, but does offer some paid upgrades for features like increased search abilities, a "free automatic boost per day during prime time," or even the option to browse privately in "Incognito Mode."

*It's available on both desktop and mobile.

3. Best for those looking to get hitched: eHarmony

Founded in 2000 by Dr. Neil Clark Warren, eHarmony is the site for serious daters. A spokesperson for the site says it's been used by 54 million people and is apparently responsible for 4 percent of U.S. marriages.. Users answer a lengthy questionnaire that helps eHarmony determine what it calls a "a select group of compatible matches with whom you can build a quality relationship."

"That doesn’t mean you’re going to walk down the aisle, but it certainly means that you’re looking for a very serious relationship that may or may not lead to marriage. It may lead to living together or at least being in an exclusive, committed relationship."

*While it's free to make an account, answer questions, and see your matches, you'll need to select a paid membership to make contact. Prices start at $19.95 per month.

*It's available on both desktop and through its app.

*It's not recommended for users looking to date casually. "eHarmony will not cater to somebody who’s looking for a casual relationship or hookup– you will never see that on eHarmony," Spira says.

What initially began as a Facebook app developed in 2007 has grown into a company with 35 million users in more than 80 countries.

Rather than asking its user for dating questions, Zoosk picks dates for its users based on a user's on-site activity. If you shoot a message to Jane Doe, for example, Zoosk says it'll use that action to determine which types of profiles to show you going forward.

"Zoosk is fun and flirty," Spira says. "It does cater to a younger crowd – more of a millennial crowd."

*Zoosk is free to sign up, but you'll need a paid subscription to interact with other users. The company also uses its own form of currency called Zoosk coins that are available for purchase. Daters can use these for features like adding a "boost" to their own profiles in search or sending another user a "virtual gift."

*Users can browse the site on both desktop and mobile.

Plenty of Fish sometimes styled as POF, boasts 4 million daily active users, with 65,000 new users each day apparently, and claims users send 1 billion messages per month. After registering for POF, hopeful daters take a personality test that then helps POF determine what they call, "Your Relationship Needs." Basically, it's a way to make sure users know what they want from their love lives and to ensure that it serves users with other profiles that meet that criteria.

One unusual quirk: The site recently launched a feature that allows users to message others through Google Home.

Says Spira: "They have a large user base, are a free site, and are very popular."

*POF is pretty much entirely free but does offer upgrades. Like Zoosk, POF offers "tokens" that let users "highlight" their profiles so that they stand out to other users, send a message that goes straight to the top of their inboxes, or send a "Super Yes" to users they're particularly interested in.

*It has both a desktop site and an app.