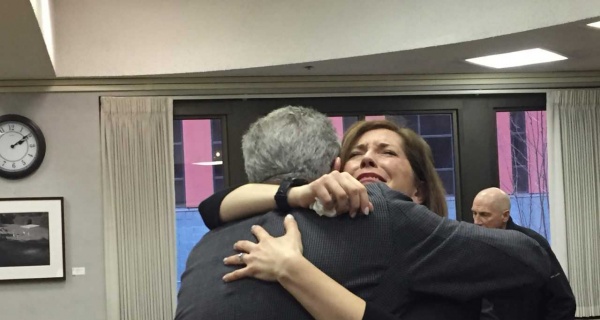 A jury on Monday declined to award any money to a 4-year-old Portland boy who suffered profound brain damage after he contracted herpes from his mother at birth.

Attorneys for Jonah Johnson had sought $46.5 million, saying obstetrician-gynecologist Dr. Carrie Miles should have recognized that the boy's mother was infected with the disease when she arrived at the emergency room of Legacy Good Samaritan Medical Center in Northwest Portland.

They argued that the doctor should have taken precautions so the mother wouldn't pass on a virus so devastating to newborns.

Miles burst into tears of relief, then mouthed the words “Thank you! Thank you!” to jurors after Multnomah County Circuit Judge Karin Immergut read the unanimous verdict.

Testimony in the three-week trial showed that Angela Johnson Musa, then 25, had gone to the ER in her third trimester because she’d been bleeding, and Miles noticed tiny spots that were oozing slightly on the walls of her vagina. Miles ordered testing for two sexually transmitted diseases -- chlamydia and gonorrhea -- but not for herpes.

“She knows when she sees ... a suspicious herpes lesion,” said one of Miles’ attorneys, John E. Hart, during closing arguments last week. Experts for Miles thought the mother likely contracted herpes weeks after Miles examined her.

Musa didn’t tell Miles that she had been a sex worker in the past, under the orders of two pimps, and had engaged in some high-risk sex with strangers. Musa also didn’t follow-up with her regular obstetrician-gynecologist, as Miles advised because Musa missed the scheduled appointment she had four days later, according to Musa's medical records.

Ten days after her son was born, he was seen by Portland pediatrician, Dr. Joseph Elia. Elia examined blisters on Jonah’s head but didn’t test them for herpes.

Herpes, when caught early in a newborn, can be treated and brain damage and other side effects can be minimized if not completely avoided, the boy's attorneys said.

Elia also was sued, but he settled out of court for an undisclosed sum shortly after the trial began.

Musa testified that she’d been a sex worker starting in 2009 or 2010 and had been addicted to cocaine. She became pregnant in 2012 and gave birth to Jonah in May 2013.

"Angie completely turned her life around when she learned she was pregnant with Jonah," said Musa's Portland attorney, Erin Olson, after the trial. "Her ability to overcome a past the jury heard only snippets of is a testament to her commitment to Jonah."

Her son’s attorneys said Musa was clean before she became pregnant and passed all urine drug test screenings during her pregnancy as part of a drug-treatment court program. They said she relapsed only once after giving birth.

Her son suffers from seizures and needs around-the-clock care, his attorneys said. At age 4, he can utter sounds but it’s not clear if he’s trying to form words. He has some peripheral vision, but doctors don't know the extent of his visual impairment.

He has herpes outbreaks on his head about once a month. They last for a week and require that he be isolated.

The lawsuit sought $34 million for the boy's lifelong care and therapy, plus $12.5 million for his pain and suffering. Any money awarded would have been overseen by a court-appointed conservator.