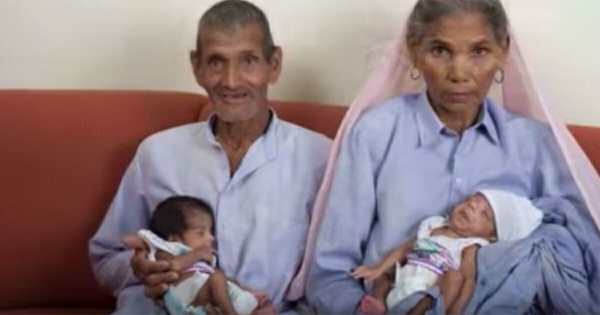 Despite the fact she and her husband already had two adult daughters and five grandchildren, the couple from northern India remained determined to have a son. He would be the male heir to the family’s smallholdings.

To pay for the IVF treatment, Omkari’s husband sold his buffalos, mortgaged his land, spent his life savings, and took out a credit card loan!

Doctors were shocked when the elderly woman got pregnant, and with twins no less.

“I’ve been in medicine for 20 years, and I have never heard of such a case,” Omkari’s gynecologist said.

After a hectic and painful pregnancy, the twins — one boy and one girl — were delivered by emergency C-section. They were born one month premature, and each weighed 2 pounds.

At first, doctors said both babies were healthy. But at the age of 4, the female twin named Barsaat tragically passed away.

The boy, Akashvani, is now about 8 years old. To this day, Omkari says people often mistake her for Akashvani’s grandmother.

In the video below, you’ll get a glimpse into this highly unconventional mother-son duo six years after Omkari delivered the twins.