Austin Rivers Is Fed Up With His Critics 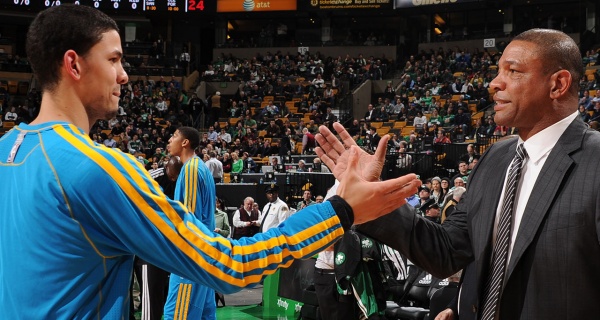 "People can say whatever they want about me and my father [LA Clippers coach Doc Rivers]," the guard told ESPN during a lengthy interview Wednesday night. "I get it. I can even put my ego aside and understand why people don't like the situation. When I was growing up and I'd see the coach's son, you'd be like, 'He sucks. He's only on the team because of his dad.' So I get it."

He might even agree, to an extent, with those who see him that way.

"People are like, 'Well, his dad gave him his chance.' Is that true or not? I don't know. It might be," Rivers said. "[But] could it be that my pops knew how good I could be because he's my pops?

"He told me on the phone [when the Clippers traded for him in 2015], 'If it doesn't work out, we'll just cut ways at the end of the year, keep it clean, and you can go on and try to figure it out.'"

And that chip on Rivers' shoulder, it's just as big as everyone thinks it is.

"I know what the narrative is on me," Rivers said. "It's because I come from money and I have a swagger and confidence about me.

"[But] if I didn't have this confidence or swagger in myself, I wouldn't be built to handle the negativity that I've gotten. I would've already broken down years ago because I've gotten this since high school. I've turned it into a fuel and it's helped me. I go into each away arena and it's rough, because of the s--- I hear. This chip on my shoulder, this swagger and confidence, it helps me. If I didn't have it, I would not be in the NBA."

Rivers said he decided to speak publicly Wednesday because he felt the incidents between himself and Rockets guard Chris Paul and swingman Trevor Ariza during Monday's game (Ariza was later suspended two games by the NBA for aggressively entering the Clippers' locker room) were being digested into a narrative about him that he allowed to go on for years without a response, knowing his play would always speak more than his words could.

Rivers isn't running from any of these unflattering labels. He's not even pushing back against them. He is cocky. He does get under people's skin. He probably did get a chance from the Clippers because his father was the coach and, at the time, president of basketball operations.

Rivers, 25, is Christian Laettner or Grayson Allen or whatever Duke villain basketball fans love to hate. He might even be the most hated player in the NBA right now.

But he's also the starting shooting guard for a team that's improbably tied for sixth in the Western Conference this season, averaging 15.8 points and 3.6 assists a night with several big playoff games already to his name.

"Look at my numbers from when I started here until now," Rivers said. "Every year I've gotten better and I've done it with people throwing s--- in my face. I never responded. I've never come out publicly and said I'm this or that. But at some point I'm a human being.

"I got offended [this week, in the wake of the ugly situation with the Rockets] when people started talking about my character. Judge me all you want as a player. Some people think I'm a great player, some people don't. That's fine. Numbers don't ever lie. I know what I'm doing and I know what this team is doing.

"I was the No. 1 player in high school. I was a lottery player at Duke. I was player of the year in the ACC as a freshman. People just forget about these things, like I don't deserve to be in the league. People are like, 'He was a bust! He was a bust!' No, I wasn't a bust. I just didn't play as well as a lottery pick should. I don't need any excuses. It is what it is. Sometimes things take time."

He said he always wanted to "just hoop" and not speak on how his relationship with his father has contributed to negative perceptions of him, because he didn't want to be perceived as complaining about it.

"I'm not saying 'poor me.' There's people that have real problems," said Rivers, who hasn't played since Dec. 29 because of a bruised heel. "So don't feel bad for me. I don't need anybody's sympathy. I'm having my best year yet. I'm trying to get back and healthy so I can help our team. And our team is playing so well. We're not getting enough credit, as a team, for figuring this thing out. We have half our team out and we're still winning games. What are we? The sixth seed? Seventh seed? I'm proud of that.

"I understand the media wants juicy, they want views, and the easiest target, let's poke at Austin Rivers and his dad. Every time I turn on the TV and it's the Clippers, my name pops up. [But] man, judge me off my performance or my character after knowing me or watching me play."

Rivers said he and Ariza hashed out their differences over the phone on Tuesday, and he considers the matter between them over.

He did not speak to Paul, who decided not to re-sign with the Clippers over the summer and was subsequently traded to Houston.

In July, ESPN's Michael Eaves reported that Paul was one of several veteran players who had resentment toward Rivers for how he behaved as the coach's son. Rivers, Eaves reported, was seen as "entitled" by several veterans. Rivers said that report hurt him because he had always looked up to Paul.

"So when I saw that he felt that way, it hurt," he said. "I had Chris on a pedestal the whole time he was here. He's one of the best point guards ever and he's a great guy."

Rivers said he used to work out with Paul during the summers, even travelling to Paul's home in North Carolina to train with him.

But ultimately, he has found a way to move past that story and view his time as Paul's teammate positively.

"I had to step back and look at the whole thing," Rivers said. "Yeah, we didn't win championships together. But I got to play with one of the best point guards of all time, and he helped turn me into a starting player. People can say I'm starting because he left. But I felt like I was going to start with him. He told me before he left, 'I'm excited to play with you,' because he knew I'd learned under him."