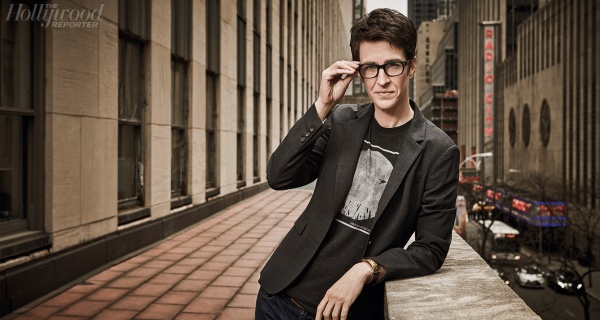 Rachel Maddow is one of the most talked-about news correspondents on television; her sharp wit, cheerful demeanor and captivating storytelling have resonated with audiences even before The Rachel Maddow Show premiered in 2008.

These days especially, Maddow has become a voice that people (well, liberals) turn to as the Trump administration becomes more and more controversial. But how well do Maddow's fans really know her? Here are a few facts that might surprise you.

She met her partner by chance

Maddow has been in a relationship with her partner, Susan Mikula, for almost two decades. As it turns out, the two met by pure happenstance; at the time, Maddow had just moved to Western Massachusetts to work on her dissertation when Mikula hired her to do some yard work.

"It was very Desperate Housewives," Maddow quipped to People in 2010.

Years later, in 2016, Maddow told Us Weekly that she fell in love with Mikula at first sight. Awww.

Their first date was rather unconventional

When you think of first dates, you typically think of dinner, drinks or a movie. Which makes Maddow's first date with Mikula feel all the more wild.

"My first date with Susan was at an NRA 'Ladies Day On The Range' event, and that is as close as I have ever gotten to the NRA," Maddow said in 2011, according to the Huffington Post.

Speaking to Rolling Stone the following year, Maddow admitted the two actually like to shoot firearms. "Susan has the hand-eye coordination," Maddow told the magazine. "But I can't control my movements."

In 2016, Maddow showed off her skills by taking CBS Sunday Morning to a firing range. "I'm a real liberal even on, like, gun safety and gun control issues. That said, I think that shooting is fun," she said during the episode. "And I think shooting ranges are an excellent place to both learn about guns and to freak your friends out."

Maddow used to be a massive punk rocker

During her 2012 Reddit AMA, Maddow disclosed a secret that her parents were "very very horrified by": she was a huge punk head in her teens.

Recalling her love for the band the Dead Kennedys, she confessed, "I don't remember a particular song that made them crazy – I think the band name itself did all the work there."

Her love of punk rock didn't stop with the hardcore stuff. "I was obsessive about Husker Du," she continued. "I also liked Meat Puppets and Black Flag, but really I would have done anything for Bob Mould."

Her musical tastes even ended up getting her into a bit of trouble with her parents. "I actually got grounded when my mom found an SST records sampler LP in my room – I think it had particularly porny cover art and she was very rattled by it," she confessed.

"As a teenager, I thought at the time that it was probably the apex of my coolness," she went on to say. "As an adult, looking back, I realize that is true."

She loves to fish

Ever wonder what Rachel Maddow does in her downtime? If you guessed fishing, you'd be 100 percent correct.

"I go fishing every chance I get. Sometimes after my show, I fish at midnight in the Hudson River in NYC," Maddow told Us Weekly.

Maddow also spoke about her love of all-things fishing during a 2012 Reddit AMA, during which she revealed her favorite smell is a "clean river [on a] spring day."

"[The] Biggest fish I ever caught was a striper that was two inches shorter than the one my mom caught ten minutes earlier," Maddow added later on. To which we say: damn!

She was outed by her school's newspaper

Speaking to The Daily Beast (via Buzzfeed), Maddow revealed her parents found out she was gay by reading about it in her college newspaper.

"I did an interview with the student newspaper about being one of the only two gay freshmen on campus," the Stanford graduate said. "The mistake I made was that I had not come out to my parents."

According to Rolling Stone, someone then took the newspaper clipping and mailed it to Maddow's parents. "They took it poorly at first," Maddow said of her parents, who were "devout Catholics."

On the bright side, Maddow's courage earned her support from her classmates. "Rachel made one choice when she was 17, and it was a domino – it made all the other choices clear," Stanford alumni and close friend of Maddow's, Jill McDonough, told Rolling Stone. "No one at Stanford was saying they were gay – there were no other out lesbians – and she saw that it was a lie. The choice was, 'I'm not going to be a hypocrite. I'm going to have courage.'"

She was nominated for a Grammy

With her silky-smooth voice, it should come as little surprise that Maddow was once nominated for a Grammy. The nomination came in 2013, in the category of Best Spoken Word Album, for her 2012 bestseller, Drift: The Unmooring of American Military Power.

Maddow ultimately lost the Grammy, to Janice Ian; but considering she was also nominated alongside Ellen DeGeneres, Bill Clinton and Michelle Obama, she should feel very, very proud of herself.

Maddow got started in radio on a dare

If it hadn't been for a dare, Rachel Maddow might not have become one of today's most popular news correspondents. According to the Guardian, one of Maddow's friends dared her to audition for a local radio morning show's sidekick spot because, as she put it, "we thought it might pay more than the minimum wage." But as soon as she was on air, something clicked. "I'd never done anything like it before but I can remember thinking: 'I like this,'" she said.

"We were a tiny little market that only had tiny little news, but I liked being the person who made good sense on the air explaining that news," she added to Rolling Stone. "I liked the responsibility of providing information: news updates, snow-day school cancellations, weather reports, traffic snarls."

It soon led to bigger things. In 2004, radio executive Shelley Lewis received a tape of Maddow's show and wound up putting her on the air with Daily Show co-creator Lizz Winstead and Public Enemy's Chuck D. "She had this incredible brightness of being – this sort of joy," Lewis recalled.

Soon, she was given her own national radio show, The Rachel Maddow Show, which offered a three-hour platform on which to exercise her sociopolitical storytelling instincts. It quickly led to guest spots on CNN and MSNBC, which made Maddow pine to be a host.

Before finding her place in radio, Maddow took on just about every odd job you can think of to support herself.

"I was a waitress, bike messenger, bucket washer at a coffee-bean factory, yard help, landscaping laborer, handyman – I was very bad at that," she told the Guardian. "I went for a job at a video store and got turned down because I didn't know enough about movies."

"I'm just a person who's had about 200 jobs over the course of my life," she added during an appearance on the Tonight Show. Her worst gig? Working at a recycling center. "I'm a real liberal, but it's made me really suspicious of recycling for my whole life," she recalled.

During the interview, Maddow explained how she would drive around in flatbed trucks, pick up carefully sorted recycling from offices and return to the "recycling center" to throw everything away. "At the time, it kind of just felt like we worked at a high-class dump," she added.

As for her most unique job, Maddow admitted to Us Weekly that she once worked "a very short-lived moonlighting job hosting a gay love songs call-in show with a co-host named Martini."

She suffers from depression

In 2012, Maddow admitted to Rolling Stone that she suffers from "cyclical depression," which can affect the consistency of her on-air performance. "One of the manifestations of depression for me is that I lose my will. And I thereby lose my ability to focus," she said. "If I'm not depressed and I'm on and I can focus and I can think through something hard and without interruption and without existential emptiness that comes from depression, that gives me – not mania. But I exalt. I exalt in not being depressed."

The newswoman referred to it as a "failure." "I see my job as making a TV show. I fail at it – constantly. And that's all I can think about," she said.

On CBS Sunday Morning, Maddow revealed how Mikula helps her cope with her illness. "The time when it's hardest is when I have forgotten that this happens to me, and so I don't know what it is, and she will say, 'you are depressed,'" Maddow said. "And just being able to identify it, and then knowing that it's not gonna be forever and that it will pass and that it will ease at some point helps."

Maddow accidentally offended her entire staff on day one

When she was given her own show in 2008, Maddow inherited the staff from Verdict with Dan Abrams. As Rolling Stone described it, she detested the show's "gimmicky emptiness" and news-cycle focus.

About a week before The Rachel Maddow Show's first taping, executive producer Bill Wolff threw a launch party and invited the entire staff. At the party, Maddow gave a speech that was meant to get everyone excited about this new journey on which they were about to embark. It didn't.

As Rolling Stone recalls, Maddow essentially told her new staff that "they needed to forget everything they had ever learned – that this show would be completely different from the one they'd been working on, that they must forget all of the skills they'd spent their careers building."

Wolff told the magazine that it took about a year for the Verdict staffers to realign themselves with Maddow's slowed-down storytelling vision.

She only dresses up from the waist up on her show

Rachel Maddow seriously could not care less about her appearance. During CBS Sunday Morning's behind-the-scenes look at her show in 2016, the anchor admitted, "It takes me about 15 seconds to get dressed, 'cause I only dress from the waist up." Indeed, underneath her desk and out of sight, she's boasting a pair of comfortable jeans and Converse sneakers. "It's like a mullet: it's business upstairs, party downstairs," she joked.

"I'm not a TV anchor babe. I'm a big lesbian who looks like a man," Maddow bluntly admitted to the Guardian. In that same interview, she referred to her blazer getup as "lady clothes," and admitted that the lipstick and blush are only worn reluctantly. Hey, whatever works!