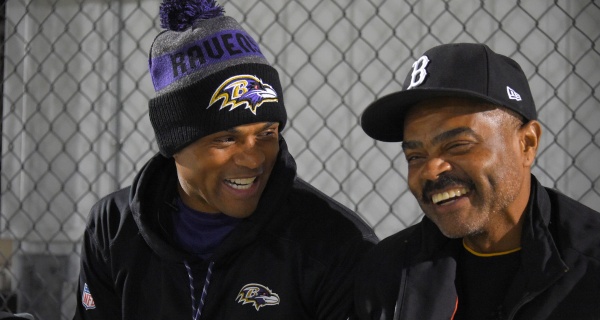 Juan Dixon is a legend in the city of Baltimore so it was a natural fit when Coppin State University named him as their latest head coach back on April 26.

The Eagles are coming off an 8-24 season and they haven’t been to the NCAA tournament since 2008 but the former NBA’er is looking forward to the challenges of turning around a program in his hometown of Baltimore.

Dixon’s background has been widely publicized since his days at the University of Maryland where he led the Terrapins to the 2002 National Championship and was named Most Outstanding Player of the Final Four.

His childhood was complicated with both of his parents passing away from complications due to AIDs when he was just 16 years-old.

That is what Dixon thought up until a year ago when he became aware that the man he was told was his biological father wasn’t and was re-united with his actual father who is a retired correctional officer and was an All-City basketball player in high school in Baltimore.

Dixon was drafted in the first round of the 2002 NBA draft (17th overall) by the Washington Wizards and spent seven seasons in the NBA with stops in Portland, Detroit, Washington and Toronto.

He spent parts of two seasons with the Raptors between 2007-08. He arrived in Toronto at the 2007 trade deadline where he was dealt by Portland to Toronto in exchange for Fred Jones. In 2008 he was then traded to Detroit in exchange for Primoz Brezec.

Over the course of his seven-year career Dixon averaged 8.4 points per game (PPG) which includes 7.1 PPG during his 62 games as a Toronto Raptor.

The Coppin State coach said he learned a great deal during his time as a Raptor and praised his former coaches Sam Mitchell and Jay Triano as well former GM Bryan Colangelo. Dixon looks at each of them as mentors and says they were a major influence in his desire to get into coaching once his playing days were over.

He said, “I love Toronto and it’s such a beautiful city.”

Dixon added, “I learned so much from my time in Toronto and I love seeing where the city and the organization have taken this team.”

Aside from being a recognized figure in the basketball world, Dixon has become a star of reality TV after his wife Robyn was a featured cast member on the Real Housewives Of Potomac which airs on Bravo.

However, it doesn’t appear that Dixon is allowing his resurgences of fame to affect his coaching career and he seems focused on using his life experiences as an educational tool for young student-athletes.

He took on his new coaching position late in the NCAA recruiting cycle but he still managed to sign eight new players to Coppin State and pointed to sophomore guard DeJuan Clayton as a returning player who could make an impact for the Eagles during the 2017-18 season.

Dixon said, “It’s going to be a grind and it’s not going to be easy but if we do all of the little things right then we can have immediate success.”