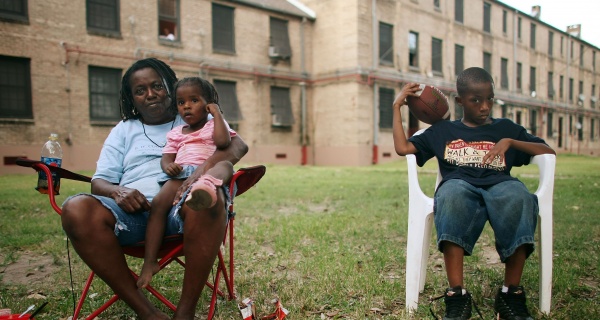 Disparities in homeownership are a major driver of the racial wealth gap, according to a recent study from Brandeis University. According to the authors of the report, “redlining [a form of discrimination in banking or insurance practices], discriminatory mortgage-lending practices, lack of access to credit, and lower incomes have blocked the homeownership path for African-Americans while creating and reinforcing communities segregated by race.”

Redlining is the practice of denying key services (like home loans and insurance) or increasing their costs for residents in a defined geographical area. In theory, this could be used against anyone. In reality, it was almost exclusively a tool to force blacks (and other minorities) into particular geographic areas. The practice began with the National Housing Act of 1934, which established the Federal Housing Administration, as well as the Federal Home Loan Bank Board. It was this agency which created “residential security maps” for several cities to determine the safety of real estate investments in selected areas.

You should already see where this is going: Existing black neighborhoods were lined as unsafe, and thus ineligible for financing. For prospective property owner, this was terrible: Absent cash on hand, there was no way to afford a home or a business in your area. What’s more, blacks were all but barred from entering white neighborhoods, if not by restrictive racial covenants (which forbid property sales to African Americans and other minorities) then by violence and intimidation. In Chicago, for instance, anti-black riots were a regular part of public life. Here’s Arnold Hirsch, author of Making the Second Ghetto: Race and Housing in Chicago, 1940–1960:

In short, redlining forced blacks into particular areas and then starved those areas of affordable capital. Combined with widespread job discrimination—which barred blacks from public employment and forced them into low-wage labor—you had neighborhoods that were impoverished by design.

When selling on contract, the speculator offered the home to a black purchaser for a relatively low down payment – often several hundred dollars would suffice. For bringing the home within the reach of a black purchaser, however, the speculator extracted a considerable price. In the Commission on Human Relations study, the percentage increase in the cost of the home from the speculator’s purchase price to that of the black consumer ranged from a minimum of 35% to 115%; the average increase was 73%.

This, it should be said, bears an eerie similarity to the targeted, predatory lending of the last decade. Of course, it was dramatically worse. Tenants had no equity in their homes until the terms of the contract were fulfilled, and speculators could evict tenants for missing a payment, regardless of their history. At least one speculator, notes Hirsch, was able to retrieve more than 150% of his investment (in a year) by evicting those who missed installments and collecting successive down payments. And there was no recourse: Unlike their white counterparts, who in the 1940s and 50s, could take advantage of the G.I. Bill, blacks couldn’t obtain conventional financing or subsidized loans. Contact lending was the only option, and it amounted to large scale (and sanctioned) wealth theft.

Related to this was block-busting. Remember, many of these cities faced a housing shortage, due to the large number of black migrants. Block-busting inspired tremendous violence and anti-black sentiment, especially from working-class whites, who were often outbid by blacks, but couldn’t afford suburban housing outside of the city. What’s more, it—along with contract-buying and the destruction of the tax base—helped create the perception that blacks were responsible for the deterioration of a neighborhood.

All of these tools and approaches were facilitated by the federal government and its partners at the state and local level. For decades, it was a project of Democrats and Republicans, who worked to appease a white supremacist majority, and often, shared their assumptions. This continued into the 1960s, and arguably, never stopped: Public housing projects, for instance, were placed in these segregated, depressed neighborhoods as a compromise with conservatives who opposed them outright. This, in turn, ensured concentrated poverty and all its attendant problems, as well as bad schools and poor public services. The Fair Housing Act of 1968 was meant to tackle all of this, but as Nikole Hannah-Jones details for ProPublica, it saw sporadic enforcement, if that.