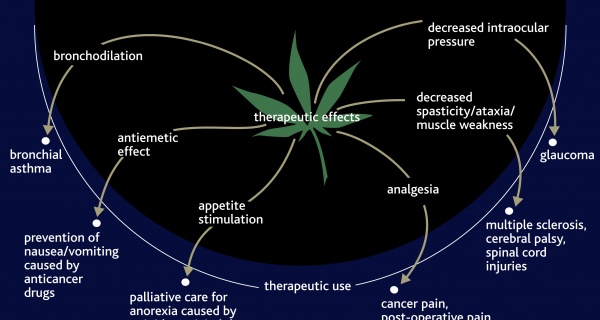 Marijuana still toes the line between recreational drug and medicine, while the federal government deems it illegal without any health benefit.

The truth is, doctors and addiction experts have only had a whiff of evidence on marijuana's effects, positive or negative. Medicinally, marijuana can treat chronic pain, nausea and the effects of multiple sclerosis. However, experts are likely to tell you it's too early to define marijuana's effect without more testing.

In the meantime, people continue to use the drug recreationally and medicinally. Here's what experts say happens when you smoke weed every day:

Dr. Stuart Gitlow, a professor at the University of Florida and a past president of the American Society of Addiction Medicine, said marijuana is much stronger than it was years ago, giving a more psychedelic feel rather than a mild sense of intoxication.

A small percentage, he said, could have hallucinations and paranoia. However, the vast majority, he said, experience that mild high, which fades after several hours.

After days of use, the pot becomes stored in the body's fatty tissue and THC is gradually released into the bloodstream, meaning a person can experience the effect of the drug around the clock.

Daily use, he said, promotes a chronic loss of attention, focus and concentration. Daily users perform at a lower level at jobs and at school. Focus and motivation also decrease, he said.

Caron Treatment Center Medical Director Dr. Joseph Garbely said about 15% of cannabis users develop an addiction. Daily users, he said, suffer memory, coordination, and problem-solving issues. For some, it could change the way a brain matures. Smokers who start young, he said, are more susceptible to being a daily user or becoming addicted.

Gitlow and Garbely concede we don't know all we need to know about marijuana. It took decades, Gitlow explained, for researchers to determine the affects of smoking cigarettes.

Dr. Ryan Vandrey, an associate professor at Johns Hopkins Medicine, says you can't generalize marijuana users. Other factors need to be considered such as their dosage and the reason a person is using the drug. However, he said marijuana can have impact on how people perform at their job or at school. Withdrawal can occur after a period of long-term repeated use.

Dr. Gregory L. Taylor II, a primary care physician and assistant professor of medicine at the University of Southern California, said federal limits on research have inhibited thorough research on marijuana and its effects on the body. He said the research isn't "100% clear" on the drug's negative outcomes, adding there's no overwhelming data it contributes to certain cancers. If possible, he said the drug should be used under the direction of a doctor.