If Only We Could Bring George Bush Back Now! 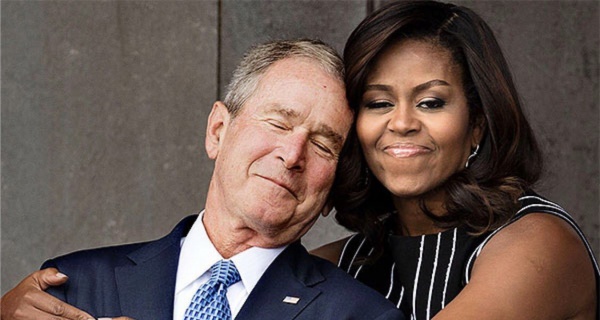 Eight years ago, amid the financial collapse known as the Great Recession, America broke up with its 43rd president with such relief it might as well have dumped his clothes on the White House lawn and screamed from an open window “get out!”

In 2008, at the close of his second term, President George W. Bush’s approval ratings had plunged to 25 percent, among the lowest in presidential history next to Harry Truman and Richard Nixon. His would-be Republican successor, candidate John McCain, actively distanced himself from the Bush administration and comedians relentlessly mocked the man.

So during his presidential “afterlife,” as his wife calls it, the eight years of America’s rebound relationship with cool guy Barack Obama, Bush eased into an existence of purposeful inconspicuousness. He wrote a book, as most past presidents do, learned to paint and said nothing controversial.

He left former aides to defend Bush, the legacy, and Bush, the man. Most of those who worked with him loved him and deeply resented his vilification by critics during and after his time and office.

There’s no evidence of any substantive reappraisal of Bush by those critics, who remain incensed by, among other things, the fact that he took the nation to war in Iraq over weapons of mass destruction that did not exist.

But in the first few months of 2017 and amid a book tour that landed him glowing spots on the “Ellen DeGeneres Show” and in People magazine, Bush is at least getting a little more respect from some who deeply disrespected him.

Time helped. So did President Trump.

Former president George W. Bush holds a copy of his new book, “Portraits of Courage: A Commander in Chief’s Tribute to America’s Warriors,” during a press preview in Dallas. (LM Otero/AP)
Some of the rethinking of Bush stems not from anything Bush has said or done but simply from the contrast with President Trump, a comparison bolstered by his recent appearances on talk shows and in news segments.

After the “Ellen” show posted a video of the former president joking about his inner “Rembrandt” and learning to paint, viewers flooded the comments with unexpected praise.

“A few years ago I would have rolled my eyes at the [sight] of this man, but 6 weeks of Trump makes W look like a pretty decent guy,” one woman wrote. “Perspective is a funny thing.”

In an interview with “Today’s” Matt Lauer, for example, Bush defended the news media against Trump’s “enemies of the American people” attack.

“We needed the media to hold people like me to account,” said Bush. “Power can be very addictive and it can be corrosive, and it’s important for the media to call to account people who abuse their power.”

“I think we all need answers,” he said, when asked about Russia’s attempt to intervene in the election through hacking. Asked whether there should be a special prosecutor, he said “I’m not sure the right avenue to take. I am sure, though, that that question needs to be answered.”

Bush later said he didn’t intend for his comments to be construed as criticism of Trump.

Joy Behar, the liberal on the daily talk show “The View,” noted after Bush’s comments that though she was “after” him for eight years, she just might purchase one of his paintings because of Trump.

“The thing about this,” she said, “is that Donald has now done something I thought he would never do. I like — I like the fact that George Bush — I like George Bush now, is what I’m trying to say. I’m having trouble saying it.”

“You know things are bad when George W. Bush starts sounding like a member of the Resistance,” said Startrek’s George Takei.

The fondness took flight online last fall when, at the opening ceremony of the National Museum of African American History and Culture in D.C., cameras caught Obama and Bush in a brief but clearly warm embrace. The New York Times called it “the embrace seen round the world,” sharply symbolic at a time of political strife.

“That surprised everybody,” Bush said on the “Ellen DeGeneres Show” Thursday when the host asked about his “good friend” Michelle Obama.“That’s what is so weird about society today, that people on opposite sides of the political spectrum could actually like each other.”

n an interview with People magazine, Bush said: “When I saw her, it was a genuine expression of affection.”

Their friendship seemed to remind onlookers that even if they disagreed with Bush the president, there was no harm in feeling warm toward Bush the man.

Or perhaps it was affection by association, the feeling that anyone Michelle Obama seemed to like had to be okay.

According to Bush, it was shared laughs that bonded the two.

And now that the Obamas are entering their own presidential “afterlife,” George and Laura Bush have extended a bipartisan invitation for the two couples to join forces in supporting veterans.

“It’s going to take them a while to find their footing and figure out how they’re going to do what they want to do,” George Bush told People. “But if there’s a way to be symbiotic, we’ll do so.”