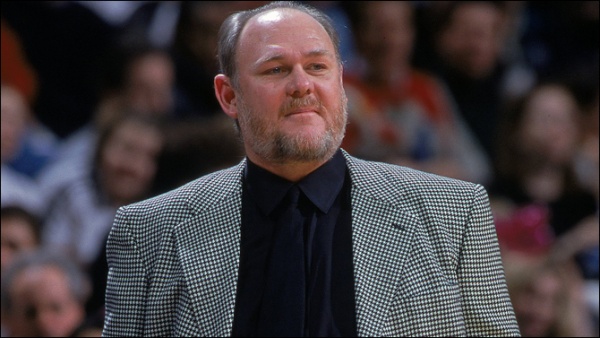 George Karl may not be up there with his nemesis Phil Jackson on the top tier of the NBA-coaching pantheon, but as one of only nine men to have won 1,000 games, he’s not far off. Aside from his sideline success, NBA fans know Karl as a forthright, irascible presence; qualities on ample display in his forthcoming memoir Furious George: My Forty Years Surviving NBA Divas, Clueless GMs and Poor Shot Selection, co-written with Curt Sampson.

Even before the book’s publication, its contents drew attention for Karl’s unfiltered criticism of his former players, including current Knicks star Carmelo Anthony. Those were hardly Furious George’s most incendiary words. Karl also writes about his suspicion that the league preferred certain teams winning over others and the referees’ susceptibility to outside influence.

A few days before Christmas, Karl, whose last coaching stint was with the Sacramento Kings during the 2015–16 season, spoke over the phone about those issues as well as changes he’d like to see the league make, one of the NBA’s most widespread rumors, and whether or not his book has torpedoed his chances of getting another coaching job.

Probably the most controversial idea you put forward in your book is that the league uses the refs to influence the outcome of games. But you really only insinuate. So let me ask you: Do you believe that the NBA sometimes attempts to determine which teams win and which teams lose?

That’s my interpretation. I’m a conspiracist about this. The NBA is a multi-billion-dollar business and has a financial interest in certain teams and players doing well. Do I know the league tries anything funny? No. But things are suspicious.

The examples you use are when your Seattle Supersonics had officiating calls go against them in the playoffs in ’93 against the Phoenix Suns and then again in the ’01 playoffs when your Milwaukee Bucks were playing the Philadelphia 76ers. In both cases you say that the league wanted the MVPs — Charles Barkley and Allen Iverson — in the finals. This isn’t just retrospective sour grapes on your part?

Look, when I got into the early ’80s, the NBA was a struggling business. You could buy a franchise for 10 or 12 million dollars. David Stern, with the help of Magic Johnson, Larry Bird, and Michael Jordan, did an incredible job of turning the league into a big-money venture. I have trouble recognizing that the NBA is primarily a business and not a sport. That’s probably going to be my ultimate downfall with the league.

So I’m still not totally clear on your answer to my question. Does the league try to manipulate outcomes via the referees?

There are days I think it does. But deep down in my heart I have to believe it doesn’t.

In the book you also sympathetically bring up Tim Donaghy, the former ref who admitted to betting on NBA games. Have you ever caught a whiff of gambling-related activities on the part of players, coaches, or refs?

Not with coaches. The idea that a coach could be thinking “I gotta make sure we win by three so we cover the spread” — there’s no way a coach could engineer that. I don’t think a player could do it either. That only leaves one other person.

There’s a lot of truth to what Donaghy said. The NBA swept his book under the rug pretty damn well.

You’re friendly with Michael Jordan. Have you heard the conspiracy theory that his first retirement was a secret suspension for his gambling problem?

Yeah, I’ve heard that one.

Think there’s any truth to it?

I hope not. But Michael will bet on the door opening. He was a competitive S.O.B. when he was playing, and he’s still that way today when he’s at the casinos in Vegas.

I’m sure you saw how people already picked up on your calling Carmelo Anthony a “user.” What’s an example of Carmelo’s being a “user”?

I think what I have to say about that is in the book. But here’s what I’ll say now: Melo is a hell of a player, the best offensive player I’ve ever coached. I owe him as much as anyone for my having a great record. But there’s a new generation of players interested in personal branding and gaining money and power off the court, and that’s all new to me. There were too many times with Melo when what was going on off the court was more important than what was happening on the court. It bothered me then and it bothers me now. That kind of thing bothered me just the other night.

I was watching the Portland Trailblazers play, and I was trying to figure out, What the hell is wrong with this team? My conclusion is that Damian Lillard is getting too much attention.

What makes you think that?

Who controls the team? The coach and the point guard. And that team is not working. I think their coach, Terry Stotts, is a great coach. So I’m going to say the problem is Lillard. They were a together, connected, committed team last year. This year they’re not. What changed?

I get that the idea of self-sacrifice makes sense to a coach. You guys are judged on wins and loses. But isn’t it entirely rational for an NBA player to be at least a little selfish? Their careers are short and they retire, by the latest, in their late 30s. Why shouldn’t players put their financial goals first?

That sounds like something that should be on First Take. This is all part of the evolution of basketball players making millions of dollars when a lot of these guys don’t know how to handle that money. The league should be focused on helping the players not lose the money they earn. I’m 65 years old and I’ve lost a lot of money in bad investments because I wasn’t qualified to be making financial judgments. The league needs to do more to help its young men be more advanced financially. I know it has programs for players, but it needs to connect those players with financial institutions that can say, “We’re not going to guarantee that you’ll make money, but we can guarantee you’re not going to lose money.”

I’d also like to be connected with an investment adviser who can guarantee I’ll never lose money.

Me of all people talking about finances is stupid, but the league should find people who can say to players, “If you lose money, I lose money too.”

Should Phil Jackson still be running the Knicks?

I’m happy that Phil has power. Obviously it’s taking him some time to learn the intricacies of management, but we need more coaches in management. That’s not going to happen, because franchises are worth a billion dollars and the businessmen want to have their say.

Has Phil hurt the Knicks by being so dedicated to the triangle offense?

I have the highest respect for what Phil Jackson has done for the league. He brought the triangle into the NBA because that system was very team- and pass-oriented. But in my opinion, player spacing has now become more important than ball movement. The triangle is basically a two-guard front and the one philosophy I don’t believe makes sense in the NBA today is the two-guard front. The spacing of the modern game makes it too difficult. But, you know, I’m sort of a Knicks fan right now. I’m rooting for Phil and Melo to make the playoffs and get out of this quagmire of misery they’ve been in.

If you could snap your fingers and fix one thing about NBA basketball, what would it be?

They gotta start calling traveling. Every night guys are taking four steps. I also think the game now is probably better played four-on-four. The players are bigger and faster, the coaches are smarter; if you want entertainment, give these great players more space. But the first thing that came to mind was superficial: Why can’t we bring back the old red, white, and blue ABA ball?

Were you worried that writing a book like the one you’ve written would hurt your chances of ever coaching in the league again?

No question. But I think there’s too much spin going on with the game, especially from people who don’t really know anything. So I wanted to tell the truth about what goes on.

Who’s the most overrated player in the league?

I’m not going there. I would still like to coach again