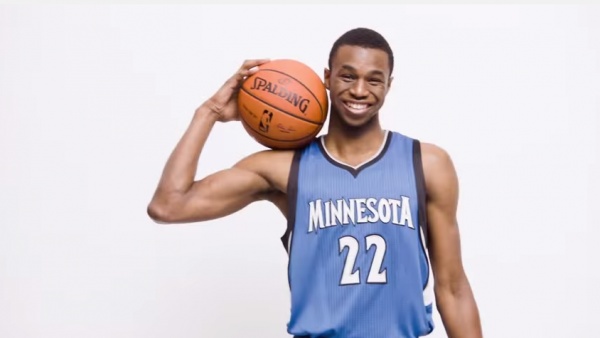 For a guy not known for showing much emotion on the court, Andrew Wiggins can’t stop smiling now that he’s off it. Because on his night off and on this floor of the Complex offices, he’s got a paddle in his hand, Drake’s blaring from the speakers, and he’s working his opponent across the table.

The Timberwolves forward low-key loves ping pong and it turns out he’s pretty good at it. In New York a day early to play the Knicks, Wiggins could be doing whatever he wants. Instead, the No. 1 pick in the 2014 NBA Draft chose to get in a few games. Wiggins might serve illegally (claims his overmatched opponent, First We Feast editor Justin Bolois) but the baller’s smiling as he smashes winners like it’s nothing.

And that’s when you notice it; the ear-to-ear grin that makes him look like a 12-year-old kid rather than a 21-year-old burgeoning NBA superstar. It’s the Wiggins NBA fans rarely get to see—affable and animated. An hour later when’s he’s done, Wiggins says he’s headed back to his hotel and not out to enjoy the city’s nightlife. He’s got video games to play, he says, flashing that coy, toothy smile. Plus he already had dinner—his favorite, Chipotle.

But before peacing out, the kid sits down for an interview. He plugs in his music, cues up something one of his boys from the UK put him on to that sounds like Skepta but isn’t, and answers questions about the first time he dominated on a basketball court, his native Canada, Degrassi, and the (so far) dunk of the year.

You’re a pretty good ping pong player. Where do the ping pong obsession and skills come from?

Growing up, there was a rec center by my house and I used to always go there, play ping pong. I got better over the years. And me and my friends always played. Now I’ve got a table in my house.

Do you play with your boys and have tournaments?

Not tournaments. Just within ourselves. Sometimes it’ll just be 10 of us playing and taking turns. Winner stays on.

Are you the best player amongst your friends?

I think I’m the best player. There’s a guy named Rich that has all the spins. He’s the only one [that gives me a good game].

We should probably talk about basketball. That slam you had over JaVale McGee—was that the dunk of the year?

It’s a coincidence because Zach [LaVine] had a great dunk the game before in Phoenix. I like my dunk. I think it goes either way. His dunk was nasty.

What was going through your mind when you saw that opportunity?

He blocked me a couple of minutes before that when I tried to come into the lane. And after he blocked me I told myself I’m going to dunk on him if I get the chance. And then I just made a good move to the basket and I seen him and my eyes just lit up. I just knew it.

Tom Thibodeau took over as your coach this season. How has he’s changed the culture in Minnesota? How different does this team feel this year compared to last year?

Well, K.G.’s not here now, and he was a key piece. He was like a mentor. The team is a lot younger. Last year we had Andre Miller and Tayshaun Prince and K.G. Now we have younger guys taking on bigger roles. We’re learning a lot of stuff, beginning a new system. We’ve been losing a lot but we can see ourselves getting better every game defensively. And offensively we have already; we’re top 10 offensively.

And Thibodeau obviously is a guy that has a defensive reputation.

His method, his system is proven. We just have to buy in and perfect it. Perfect it and we’ll have success.

After last season and the addition of Thibodeau, how much pressure is the team feeling from the fan base? You guys were expected to take the next step.

There’s pressure within ourselves but it’s positive pressure knowing that we’re better than this. We’ve let at least five, six games slip away from us that we should have won.

Do you remember the first time you dominated a basketball game?

Middle school. I don’t remember how much I was dropping, but I remember there came a point in seventh grade where I wasn’t on the best team, but my team beat a lot of the best teams because I was dominating.

Did you have a moment when you knew you were better than everybody else on the basketball court?

Probably when I started dunking and no one else was dunking.

And how old were you?

If you could go one-on-one with a player past or present, who would that be?

Did you model parts of your game after Kobe?

In high school and stuff I would watch Kobe clips. But as pre-draft came and my first year in the NBA, even now, it’s been 80 percent Kobe videos that I watch. I like his game.

We have a number of Canadians working at Complex in New York, and they want to know: What is the most overrated thing about Canada?

Well, there’s one guy in the office who’s from Montreal, and he says poutine is the most overrated thing.

Oh, I hate poutine. I tried it once—ugh. It wasn’t for me.

And what's the most underrated thing about Canada?

It doesn’t get as cold as people think. New York gets just as cold. There’s no polar bears or igloos or moose. Where I’m from, Toronto, is a big city. But people be asking like, “What’s in Canada?” And I’m like, “Same thing as over here.”

Were you a Degrassi fan growing up?

I watched a few and I was in an episode. Back in high school, I think I was in ninth grade. They made five basketball players from our school go be in this episode. We were in the background; you can see my face if you watch it.

Do you get residuals from Degrassi?

Yeah. But I didn’t have any speaking parts in it. I was a nobody back then—well, not a nobody, but no one knew my name.

What's the most overrated thing about being in the NBA?

Probably the traveling after a while. Every two days we’re basically in a new city.

And the most underrated?

I don’t know. Maybe the celebrities we see at the game. They’re watching you play and you watch them in a movie.

You tweeted those Yeezy cleats that Von Miller wanted to wear back in September. Is there any chance you'd ever rock a pair of Yeezy basketball sneakers on the court?

Maybe if I tape my ankles. But if they made basketball Yeezys, I’d be all about them.