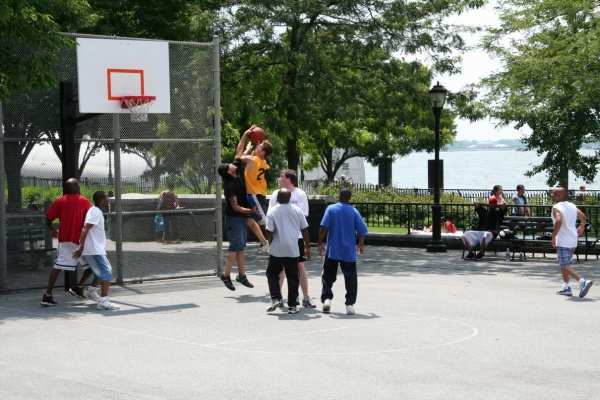 You might've missed it, but West Virginia coach Bob Huggins recently said one of the smartest things you'll hear any coach say this season.

I'm going to run it back for you below, and before you balk at Huggins' old-school thoughts on basketball players in today's culture, read all of his quotes and take a minute to appreciate where he's coming from. His points are fair, and they're shared by plenty of people decades younger than him. This isn't a boilerplate, nostalgic we-walked-uphill-both-ways-in-the-snow rant. It's a critique that permeates throughout all levels of basketball. Pro, college and high school.

Here's the issue: The overall build and quality -- the athleticism and size -- of the modern basketball player is better than 15, 20, certainly 30 years ago. That is undeniable. Dudes are just so much more physically impressive and athletically dynamic than what we saw in the 1980s, let alone the 1960s.

But in terms of competitiveness, instinct, knowledge for team hoops and overall want-to, there's room for a whole lot of debate.

Last week, Bob Hertzel, who covers the West Virginia basketball beat locally, ran a piece with some loud quotes from Huggins, things that deserve to be discussed.

I'm block-quoting all of what Huggins said in the article, because it's all very good and much of it, in my opinion, is dead-on:

"I don't think they know how to play," Huggins said.

It isn't their fault, he says, but it is the reality of the times.

"I think they play all of the time but they don't," Huggins said. "It's kind of long and complicated and I'm not trying to kill AAU because I think it has some good. But I think when you used to have to go to the playground to play, you had to win, or you sat for four or five games."

"The older guys expected the younger guys to pass them the ball and screen, and guard their man, and do all of those things and they were going to shoot the ball," Huggins said, inferring that the older guys were usually the better scorers.

"I think when you go out there and play three games a day and you know you get two Whoppers with cheese, and fries, and a shake twice, and a pizza afterwards whether you win or lose (it takes away from the ultimate goal of the game, which is to win.)

"I mean," Huggins continued, "I didn't have anybody buying me pizza if we didn't win. I just think it's a product of the older guys used to help the younger guys. Now they're never around.

"You drive by courts now, you don't see anyone out there playing. It's just a different culture, I think. And in fairness, the athletes now are bigger, stronger, faster. They're better. It's just their idea of how to play sometimes baffles me."

Plenty to unpack here. I'm going to number out my thoughts:

1. Don't mislabel this as a Huggins-hates-AAU thing. He doesn't, and he says as much. That's a lazy take, and anyone who actually covers the sport knows that broad-brush criticism of AAU always lacks actual legitimacy. The system isn't perfect, but it's a whole hell of a lot better in 2016 than it was in 2006.

2. Regarding AAU/elite-level travel basketball and the mindset it has created, there is a lot of truth there.

The product itself is very good, the system in place in a lot of places has been upgraded thanks to millions of dollars poured into the system by Nike, Adidas and Under Armour. Players are getting exposed to high-level competition and are learning a lot of things (dealing with the media, for instance) that will prepare them for college and, for the lucky few, eventually the NBA.

But Huggins' issue is the lack of meaning for the games. In elite youth basketball, you play tournaments or one-off events wherein you'll have two or three games a day, the losses don't matter so much, so long as you find your way to a mixtape that will be uploaded to YouTube and shared on Twitter/Instagram within 24 hours. When learning how to play on the playgrounds, it sucked having to wait an hour after losing. You didn't have all day; you weren't getting shoes and gear handed to you. Winning meant getting better, it meant learning in a primal way, and a lot of that has been lost. Call it romanticism, but everyone from NBA coaches to high school assistants share this concern.

Playground basketball used to be where guys went to get better, where they went because they wanted to be there because it was the best place to prove yourself -- and to do it on your time and in your free time. Now these prospects don't want to and/or don't have the time because they're traveling so frequently between April and October with their grassroots teams.

3. Huggins was sparked to this pontification due to West Virginia's interesting road to 8-1. WVU has a great road win against Virginia, and it turned Manhattan and Western Carolina over a combined 74 times, an outrageous effort. But the 'Eers also fell against mercurial Temple, and it's clear that loss is sticking with Huggs. He's seeing a lack of understanding for team play within his own guys, but obviously this is something that college basketball has been struggling with for a very long time.

4. Despite all of this, college hoops is doing well. The style of basketball is different, but college hoops isn't in trouble because of this. It's hindered but not handicapped.

Win No. 800 should come Saturday for Huggins. His first one was in November of 1980, when he was coaching NAIA Walsh College. He was a different person then, a young man not that far removed from a tremendous playing career at West Virginia. Now 63, Huggins has come full circle by returning to his alma mater. Generations have passed through college hoops, and with that transition, the game has changed.
Huggins knows it won't ever return to what it once was, and maybe it shouldn't, but it wouldn't be a bad thing to see more players have less entitlement. It wouldn't be a bad thing for college basketball if freshmen didn't demand starting time. It wouldn't be a bad thing for college basketball if players arrived on campus with a more well-rounded knowledge of team basketball and a basic understanding of the game's fundamentals. Some players still do, but what used to be the majority has now become the exception, and it's why coaches like Huggins frequently find themselves frustrated not with what college basketball has become, but with how the developmental culture has -- perhaps unintentionally -- altered the player.