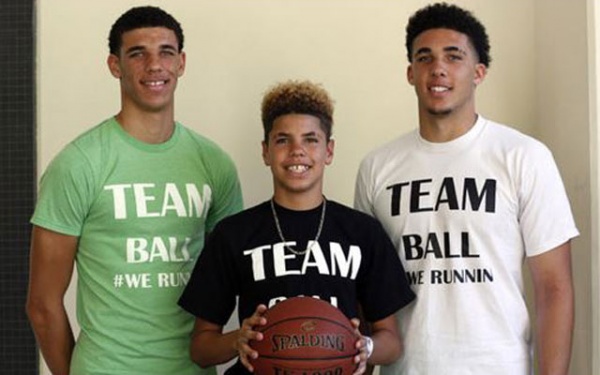 Date Posted: Monday, August 3rd, 2015
College basketball programs are always looking toward the future, but UCLA may be ahead of the curve in that regard, as the Bruins received a verbal commitment from 13-year-old prodigy LaMelo Ball on Saturday.

According to Gary Parrish of CBSSports.com, the Class of 2019 guard from California intends to play at UCLA once he completes his high school career. He will follow in the footsteps of his brothers, Lonzo and LiAngelo Ball, who will begin play with the Bruins in 2016 and 2017, respectively, per Josh Gershon of Scout.com.

The three brothers play together on a summer team coached by their parents, according to Parrish, and LaMelo averaged nearly 20 points per game in a recent tournament despite playing against much older competition.

Per Rob Harrington of Scout.com, LaMelo's father, LaVar Ball, explained the reasoning behind the early commitment:

Now, we don't have to worry about recruiting. The goal is to get 10 times better between now and when they get (to UCLA). LaMelo has an advantage because he has been playing against way more experienced players than his brothers at the same age. He wants to be better than them, and his older brothers can lead the way.

Recruiting youngsters is far from a new sensation, as players close to Ball's age have committed to play for big-time college basketball programs before, according to ESPN.com's Myron Medcalf.

One person who isn't a fan of it, though, is Cleveland Cavaliers superstar LeBron James. Per Mike Sullivan of CBS Detroit, King James is against his son, Bronny, generating college interest.

"Yeah, he's already got some offers from colleges; it's pretty crazy," LeBron said. "It should be a violation; you shouldn't be recruiting 10-year-old kids."

If recruiting players in junior high school becomes a regular practice, then it could open up a can of worms. Some recruits may not develop into the players they were expected to become, and that puts colleges in awkward positions.

In LaMelo Ball's case, though, he comes from an impressive pedigree, with two talented brothers, and he has shown the ability to excel against those who are bigger and stronger than him.

Based on that, UCLA's decision to accept his verbal commitment four years before he graduates high school figures to be looked upon as a smart one down the line.