Mitch McConnell: Businesses Suffer Because People Are ' Doing Too Good With Food Stamps ' 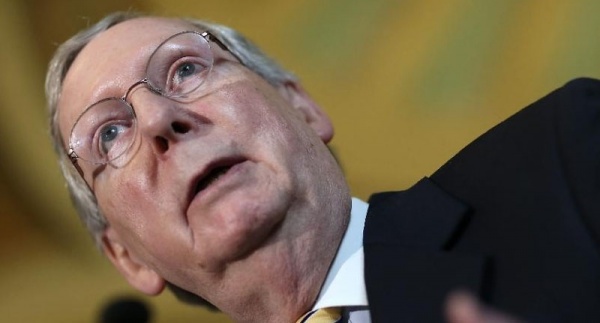 Republican Senate Majority Leader Mitch McConnell argued recently that the nation’s economic recovery was being stunted by people who were “doing too good with food stamps, Social Security and all the rest.”

In an interview that was published on Monday, McConnell told Politico that the 2016 presidential race was a “critical election” to restoring “the growth rates and the greatness we’ve had most of our history.”

The Kentucky Republican reportedly “scoffed” at the idea the economy was improving.

McConnell said that business leaders complained to him that they had “a hard time finding people to do the work because they’re doing too good with food stamps, Social Security and all the rest.”

And he accused President Barack Obama of wanting to “Europeanize America” by saddling the country with “massive debt, high taxes on the most successful people, over-regulation.”

Even though McConnell disagreed with Sen. Ted Cruz’s (R-TX) proposal to shut down the government over Planned Parenthood funding, he suggested that Republicans would do everything possible to derail the president’s second-term agenda.

“The concrete part of [Obama’s] agenda was when he controlled the Congress with big majorities the first two years,” McConnell explained. “The rest of it is very much open to being changed by a new president with a different point of view. Just like that.”