Charles Koch's Focus On 'Injustices' Is Fueled By An Unlikely Partnership 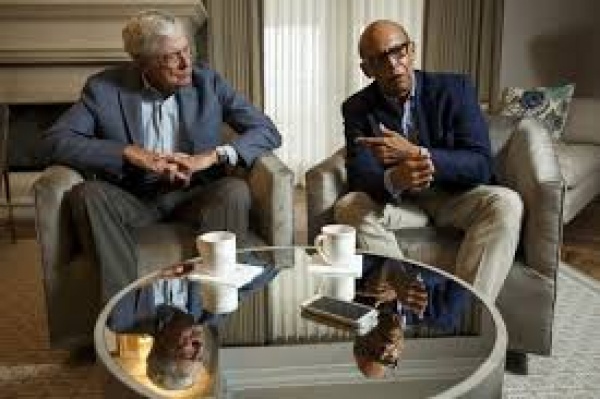 DANA POINT, Calif. — Last month, billionaire industrialist and conservative donor Charles Koch was meeting in his Wichita office with Michael Lomax, president of the United Negro College Fund, when the conversation turned to the recent church massacre in Charleston, S.C.

“The reaction of the people in that community, I mean, blew me away,” Koch recounted Monday in a rare interview with The Washington Post. “I said, ‘These people are a lot better than I am.’ Forgive this guy? I mean, it’s so monstrous what he did. It just shook me.”

That July meeting helps illustrate why Koch invoked the memory of movements such as the fight for civil rights during a weekend speech to conservative donors here, comparing those struggles to efforts to roll back government regulations.

It drew mockery on the left, but the comparison, along with Koch’s frequent references to “injustices,” shows how he is drawing from his unlikely partnership with Lomax. The theme of helping the disenfranchised dominated the weekend gathering, part of a larger effort by the Koch political network to cast off its image as an operation driven by mega-donors.

“We have found a way of working together,” said Lomax, who joined in the interview with Koch. “And we’re going to influence each other, because we are going to talk.”

Their relationship is viewed with deep skepticism among many liberal leaders, who accused the college fund president of betraying his principles last year when he accepted $25 million from Koch Industries and the Charles Koch Foundation. The American Federation of State, County, and Municipal Employees ended its scholarship program with the college fund after Lomax attended a Koch donor meeting.

In Monday’s interview, Lomax rejected the idea that he had compromised by taking Koch’s money. “We have never imposed a litmus test or a political lens on our relationships,” Lomax said.

In the wide-ranging joint interview, the two men discussed what they described as a deepening friendship and what they are learning from one another, shrugging off critics who view their partnership as one that is based on mutual benefits. The conversation took place in Koch’s private suite at the St. Regis Monarch Beach, where he greeted Lomax as “my buddy” when the college fund president arrived at the door.

The two do not see eye to eye on many issues, including when it comes to voter-identification laws.

“I think there needs to be a system so people only vote once, and only live people vote,” Koch said.

However, he said the network established by him and his brother, David, did not support an effort by the American Legislative Exchange Council to pass voter ID laws in a host of states in recent years.

“No, not at all, we’ve had nothing to do — we support ALEC in certain things,” Charles Koch said. “Listen, we get criticized — we support hundreds, thousands of groups. None do we agree with everything they do.”

He and Lomax have found common ground over the issue of criminal justice reform, a cause that Koch Industries has taken up. And Koch expressed concern about the recent spate of high-profile incidents in which black men have died at the hands of police officers.

“To me, if someone is committing a crime, to deal with it needs to use the minimum force necessary to prevent that crime,” Koch said, alluding to the death last year of Eric Garner during a confrontation with police in Staten Island. “There has got to be a way to stop that. I mean, I’d let the guy go. No big deal. He’s not really hurting — maybe he’s avoiding taxes or something, but to end up in his death is outrageous.”

The conservative benefactor’s friendship with Lomax began after the former president of Dillard University in New Orleans took the helm of the college fund in 2004. Georgia-Pacific was a longtime supporter of the group, and when Koch Industries bought the paper company the following year, Lomax saw an opportunity.

When the UNCF launched a major fundraising drive several years ago, one of his first stops was Koch Industries.

As part of a 2014 grant that Koch gave to the college fund, $18.5 million went to create a Koch Scholars program, which provides scholarships based on financial need to students interested in economics and entrepreneurship. The scholars attend reading groups and a speaker series, part of a curriculum jointly developed by faculty from historically black colleges and universities and academics backed by Koch.

Lomax said the program “is not to brainwash, this is to enable.” He added that the group is “building a curriculum which will produce the kinds of skill and knowledge the students need.”

On Sunday, Lomax extolled the program to donors, saying it had drawn thousands of applications. Standing on a stage backed by a majestic ocean view, Lomax spent 20 minutes describing the value of historically black colleges to the predominantly white crowd seated under strings of white lights on the lawn of the luxury seaside resort.

He noted that six of the nine victims in Charleston had gone to historically black colleges and said the grace and forgiveness that came out of that tragedy are deeply rooted in the traditions of such institutions.

Koch said Lomax had given him a new appreciation of the values students learn at historically black colleges.

“You can teach kids skills, but if they have a bad culture, bad values, they’re not going to use it for beneficial purposes,” Koch said.

The industrialist spent much of the weekend stressing the need to help lift people out of poverty — and arguing that limiting government is the best way to achieve that.

In a speech Sunday afternoon, Koch cast his group’s efforts as akin to those of past freedom movements of the abolitionists and civil rights leaders. He invoked figures such as Frederick Douglass and Martin Luther King Jr. as models for his fellow donors.

But don’t he and his fellow donors have substantially more clout and resources than such leaders?

“That’s true, but so what, if you’re trying to correct an injustice?” Koch retorted Monday.

When asked what he thought of the comparison, Lomax spoke carefully.

“The civil rights movement, the abolitionist movement, the Revolution are parts of the American story that belong to all of us,” he said. “If they are finding inspiration and aspiration in them, that really speaks to their universality.”

He declined to take sides in that argument but said that he learned as a public official in Atlanta that “when we didn’t sit down and talk with people we disagreed with, we didn’t get much accomplished. And right now in this country, people who don’t agree, don’t talk.”

“Absolutely,” interjected Koch. “Or when they do, they shout at each other, or insult each other.”

“Look, we wouldn’t have to dig very deep, and we’re going to find some real areas of disagreement between me and Charles,” Lomax added. “But I think we’ve also much more easily and productively found some areas of agreement.”

“Yeah, I think the more we dig, we find more areas of agreement,” Koch added.

“Well, we like one another!” Lomax said with a laugh.

Koch jumped in: “Fundamentally, what we’re trying to achieve, I think we’re on the same page.”

Lomax nodded. “A principle by which I believe and operate is when you have two strong points of view, you have to find the common ground,” he said. “And if you begin to do some things together, you learn how to do more things together.”