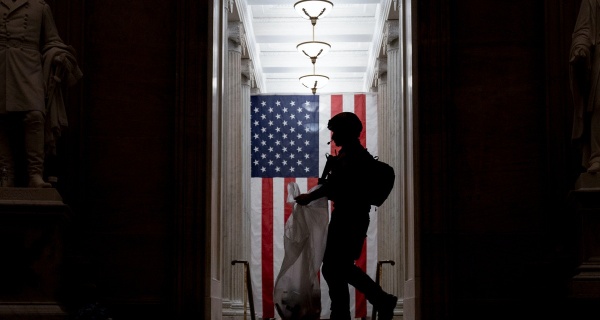 WITHIN HOURS OF the storming of the Capitol on January 6, the FBI began securing thousands of phone and electronic records connected to people at the scene of the rioting — including some related to members of Congress, raising potentially thorny legal questions.

Using special emergency powers and other measures, the FBI has collected reams of private cellphone data and communications that go beyond the videos that rioters shared widely on social media, according to two sources with knowledge of the collection effort.

In the hours and days after the Capitol riot, the FBI relied in some cases on emergency orders that do not require court authorization in order to quickly secure actual communications from people who were identified at the crime scene. Investigators have also relied on data “dumps” from cellphone towers in the area to provide a map of who was there, allowing them to trace call records — but not content — from the phones.

The cellphone data includes many records from the members of Congress and staff members who were at the Capitol that day to certify President Joe Biden’s election victory. The FBI is “searching cell towers and phones pinging off cell sites in the area to determine visitors to the Capitol,” a recently retired senior FBI official told The Intercept. The data is also being used to map links between suspects, which include members of Congress, they also said. (Capitol Police are reportedly investigating whether lawmakers helped rioters gain access to the Capitol as several Democrats have alleged they did, though Republican officials deny this.)

In recent years, the FBI has had to tread lightly in seeking any records of members of Congress due to protections under the Constitution’s speech or debate clause, which shields the legislative work of Congress from executive branch interference. The legal minefield grew out of a 2007 corruption case against former Rep. William Jefferson, D-La., when an appeals court ruled that the FBI had improperly seized material from his congressional office.

On January 11, Sen. Sheldon Whitehouse, D-R.I., released a statement warning against the Justice Department getting involved in the investigation of the attack, at least regarding members of Congress, asserting that the Senate should oversee the matter. Asked to elaborate, Whitehouse, a former federal prosecutor, told The Intercept: “Separation of powers principles generally, and the speech and debate clause particularly, restrict the executive branch’s ability to investigate members of Congress. That’s why the Constitution puts the House of Congress in charge of disciplining its members. In the case of the January 6 insurrection, I’ve asked the Senate ethics panel to take a hard look at certain members’ behavior, including whether they coordinated or conspired with, aided and abetted, or gave aid and comfort to the insurrectionists. Those questions demand answers and the Senate ethics committee has the job to answer them.”

It is not clear whether the collection of cellphone records from members of Congress on the day of the riots might conflict with that protection, because there is far less legal protection for noncontent data. “That is an interesting and thorny question. I think it depends on the nature of the phone call: Were they calling other members to discuss legislative business, or was it for another purpose?” said Daniel Schuman, policy director for Demand Progress, an advocacy group focused on internet freedom and progressive policy changes.

Congressional law expert Michael Stern said that while speech or debate privileges are generally narrowly construed when it comes to criminal investigations, such issues have often become subject to intense political conflict in the past. “In the House, it’s often become a partisan fight historically when someone’s under investigation, and the other party says you should disclose everything, and the party that wants to protect it says, ‘No, no, there’s institutional concerns here, we can’t let the FBI come in and roughshod over everything,’” Stern said.

Federal authorities have used the emergency orders in combination with signed court orders under the so-called pen/trap exception to the Stored Communications Act to try to determine who was present at the time that the Capitol was breached, the source said. In some cases, the Justice Department has used these and other “hybrid” court orders to collect actual content from cellphones, like text messages and other communications, in building cases against the rioters.

The collection effort has been met with little resistance from telecom providers asked to turn over voluminous data on the activity that day. “No one wants to be on the wrong side of the insurrection,” a source involved in the collection effort said. “This is now the scene of the crime.”

Michael German, a former FBI agent who is a fellow at the Brennan Center for Justice’s Liberty and National Security Program, said that the January 6 attack on the Capitol “certainly seems to fit” the type of national emergency that would allow the FBI to legally expedite its collection of electronic data. But he said that the wide collection of such data from the event “reflects a flawed approach that will inundate investigators with volumes of data that isn’t necessarily helpful to distinguish who committed violence at the Capitol versus those who were engaging in nonviolent civil disobedience. And meanwhile, the vast majority of people whose cellphone data will be collected in this manner are completely innocent of engaging in any criminal activity but will remain in the suspect pool that is created with any bulk collection program where the future consequences they might face are unknown.”

In a letter sent two days after the riot to 11 major cellphone and internet companies, including AT&T, T-Mobile, Verizon, Apple, and Facebook, Sen. Mark Warner, D-Va., urged the companies to “immediately preserve content and associated meta-data connected to” the riot. Some of the telecommunications providers questioned whether Warner has the authority to make such a request, but a number of them appear to have been preserving data from the event anyway because of the large scale of violence, the source said.

The FBI declined to comment on any of the specific investigative tools it is using in the January 6 investigation except to say that the bureau has received more than 200,000 tips to date from the public in response to its request for help in identifying rioters. “As with all our operations, the FBI conducts itself according to our legal requirements and established policies,” the bureau said in a statement. The Justice Department also declined to comment, referring any questions on investigative methods to the FBI.