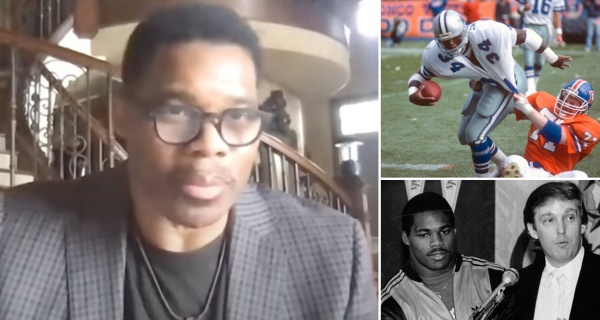 *'How many African-Americans was alive today that was in slavery? None,' he said

*'Reparations teach separation,' he added. 'Slavery ended over 130 years ago. How can a father ask his son to spend prison time for a crime he committed?'

*The athlete also questioned where the money would come from, and how the government would determine who should receive it

NFL legend Herschel Walker argued against reparations for black Americans at a congressional hearing, saying: 'Slavery ended over 130 years ago.'

Walker made his case to members of the Judiciary subcommittee on the Constitution, Civil Rights, and Civil Liberties who met via Zoom on Wednesday to discuss House Resolution 40, which aims to 'establish a commission to study and consider a national apology and proposal for reparations for the institution of slavery'.

The athlete, who played for the University of Georgia and won the Heisman Trophy in 1982 before going pro, asserted that compensating black Americans for the lasting impacts of slavery would cause more harm than good.

'We use black power to create white guilt,' Walker, a longtime friend of  Donald Trump, told the subcommittee. 'My approach is biblical...how can I ask my Heavenly Father to forgive me if I can't forgive my brother?

Walker went on to rant about the impracticality of reparations, given that slavery was abolished so long ago.

'How many African-Americans was alive today that was in slavery? Which is none,' he said.

'I understand that those pictures are horrible,' Walker said, referencing photos of a beaten slave and lynched black Americans that HR 40's sponsor, Rep Sheila Jackson Lee (D - Texas), presented at the start of the hearing.

'But right now, I think the fact-finding is going to be very difficult to go back over history when history is not even taught in school on what we're trying to in fact find.'

He continued: 'Where would the money from? Does it come from all the other races except the black taxpayers?

'Reparations teach separation,' Walker concluded. 'Slavery ended over 130 years ago. How can a father ask his son to spend prison time for a crime he committed?

'I feel it continues to let us know we're still African American, rather than just American. Reparation or atonement is outside the teaching of Jesus Christ.'

Walker was joined in the opposition by talk show host Larry Elder, who argued that systemic racism is not the main problem.

'Obviously, there are black people who are poor, the extent of which the poverty is a result of slavery and Jim Crow is tenuous at best,' Elder said. 'The larger factor behind black poverty is the absence of fathers in the home.'

Elder also called reparations for slavery the 'greatest generational transfers of wealth back and forth, because virtually every people on the face of the earth was involved in slavery.'

Rep Burgess Owens, a freshman Republican from Utah, used the venue to place blame on the Democrats for most of the US's sordid racial history.

'It has not been an American problem, it has been pretty specific. When you think about where slavery began, where segregation, where Jim Crow, it's always the Democratic Party,' Owens said.

'Earlier we mentioned 40 acres and a mule, that was ended by a Democratic president, Andrew Johnson, we talked about the KKK, that was a Democratic terrorist organization that actually was ended, at the end of the 1880s, but brought back again by Woodrow Wilson in 1915,' he continued.

Owens - one of just two black Republicans in the House - called reparations 'impractical and a non-starter' and said it was 'unfair and heartless to give black Americans the hope that this is a reality'.

'The reality is that black American history is not a hapless hopeless race oppressed by a more powerful white race,' he said, calling the current inequities 'the failure of policies'.

Democrats led by Jackson Lee brought in their own array of witnesses to support the bill, including academics, civil rights leaders, and California's new secretary of state, Shirley Weber.

The resolution to study reparations was first introduced by the now late Rep John Conyers in 1989 and was named after the '40 acres and a mule' that freed black Americans had been promised, but then the federal government didn't act on.

It would green light a commission to study the issue.

A number of Democratic witnesses argued that the term 'reparations' stands for more than just financial hand-outs.

'Popular conceptions of reparations are often fairly narrow, focusing only on financial compensation. But by contrast, the international system places emphasis on a more comprehensive approach, according which financial compensation may certainly be necessary, but not sufficient,' explained UCLA law professor Tendayi Achiume, who advises the United Nations.

'Other required measures may include transforming the political, economic and social institutions and mechanisms for disclosing truth and restoring dignity for those subject to racial subordination, resulting from legacies of enslavesment.'

And some witnesses pointed out that reparations have been given out by the government before.

Kathy Masaoka, co-chair of the Nikkei for Civil Rights & Redress, spoke of the reparations given to interned Japanese Americans, and also noted that the commission hearings - which H.R. 40 would green light for African-American reparations - helped the healing process in the community.

North Carolina Democratic Rep Deborah Ross spoke about how her state has come up with reparations for forced sterilization by the government.

'I don't believe that this particular resolution prescribes a way of going forward, but it's a conversation about what we need to do,' Ross said. 'And just as we did in North Carolina, when we passed a bill compensating people for forced sterilization, a terrible, terrible chapter in our history.'

Freshman Democratic Rep Cori Bush spoke of her family's experience with racism, as she argued to advance the resolution.

'When white soldiers came back from fighting abroad, they were given housing preferences and education subsidies,' she said.

Bush said her grandfathers were denied those benefits.

'My story is a story of men and women who fled violence, who was stripped of their right and protections, who were left out of GI bills and New Deal subsidies,' calling the racism systemic, structural and political.

There were no plans to create the commission by executive order, she also said, while pointing out other unilateral actions Biden has taken to address racial inequality since taking office last month.

'He would certainly support a study and we'll see where Congress moves on that issue,' Psaki said.

Biden's predecessor, former President Donald Trump, used the Black Lives Matter movement as a wedge issue during the 2020 campaign, downplaying the country's history of racism, and leaning into a message of 'law and order'.