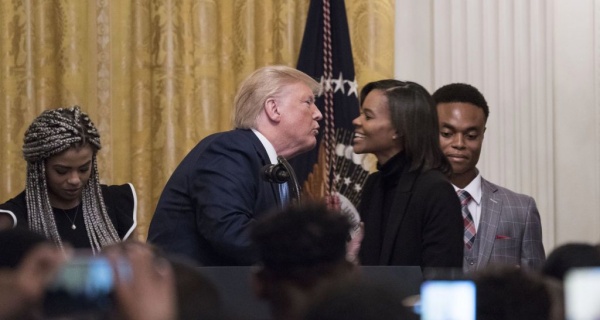 The death of Rush Limbaugh has confirmed there are now three things that are certain in life: death, taxes, and — the newest addition to the holy trinity of guarantees — Candace Owens‘ anti-Black hatred.

The conservative blowhard (Owens, not Limbaugh, in this case), clinging to the final, tattering shreds of relevance she enjoyed during Trump’s presidency, proved that truth on Wednesday after Limbaugh’s death was announced. Owens, in her classic revisionist approach to history, paid a Twitter tribute to the man whose words in life made it abundantly clear how he felt about people who share her skin color.

She tweeted that she was “heartbroken” at Limbaugh’s death and wrote that his life should “serve as a reminder to us all to fight nonstop for truth.”

Of course, it was unclear which “truth” she was referring to since Limbaugh was a hardcore bigot who championed racist conspiracy theories like the one he willingly and happily perpetuated about where Barack Obama was born.

One of the many ironies here is that Owens said she is “heartbroken” over Limbaugh’s death, the polar opposite to her reactions to the violent killings of people like Ahmaud Arbery, Breonna Taylor, and Rayshard Brooks, who were all gunned down by trigger-happy men filled with the kind of implicit racial biases shared by Limbaugh.

In case you missed it, Owens criminalized Arbery in death despite the absence of any proof he was committing any wrongdoing at the time he was ambushed by a lynch mob of racist vigilantes in Georgia last year. She was angry at what she called the “bull**** narrative” of him being “just a jogger” and suggested he deserved to be killed.

Owens also defended the Atlanta cop who fired his gun at close range into the back of Brooks, who was running away and not posing any threat when he was killed last June. She said the cop’s firing was “unjustified.”

Not to be outdone, Owens went on to question why Black people have made a “martyr” out of George Floyd and suggested his criminal record warranted Derek Chauvin using his knee to cavalierly apply deadly pressure to the unarmed Black man’s neck for nearly nine minutes.

Likewise, Owens said the Louisville Police Department “did everything right” when they botched a no-knock warrant raid at her home in search of a man who was already in custody.

What, pray to tell, made Owens’ heartbreak for Limbaugh while also making her same heart grow warmer from the news of unarmed Black people being executed? Isn’t she also trying to make a “martyr” out of Limbaugh? Doesn’t all of that make her a hypocrite?

Before you answer that, know this: Owens has a growing history of saying nice things about people who lived a life of hate. That includes Nazi leader Adolf Hitler, who she once said just “wanted to make Germany great.” So it’s really no wonder that she has vehemently defended Trump and right-wing domestic white terrorists for the insurrection at the U.S. Capitol.

But now, with Limbaugh’s death, her rapidly expiring 15 minutes of infamy have been extended a new lifeline, allowing her to keep her self-hating grift going just a little bit longer. Upholding anti-Black racism has been a tried and true tactic that has likely translated into dollars deposited in her bank account. There’s no reason to expect her to stop now.