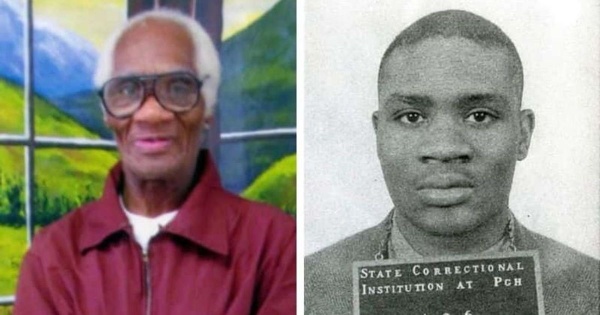 Leaving the State Correctional Institution Phoenix in Montgomery County on Thursday morning, his white hair peeking out below a prison-issue hat, Joe Ligon was accompanied by a dozen large file boxes. That’s about 10 more boxes than regulations normally permit.

It’s a privilege earned over 68 years, as the oldest and longest-serving juvenile lifer in the country. He’s been imprisoned since 1953, when he was just 15 years old.

“I guess you accumulate a lot of stuff in 68 years,” said Bradley Bridge, a lawyer with the Defender Association of Philadelphia who’s represented Ligon since 2006. Having taken on the mission of getting Ligon home — first legally, then logistically — he had to scramble to fit the materials into his car, commandeering a reporter’s trunk for the overflow.

Ligon, now 83, received a life term for murder for taking part in a spree of robbery and assaults in which two people died: Charles Pitts, 60, and Jackson Hamm, 65. Ligon admits participating in the crime with a group of drunk teens but denies killing anyone.

After the U.S. Supreme Court ruled that automatic life terms for kids are cruel and unusual, he was one of more than 500 Pennsylvania prisoners all resentenced to terms contingent on lifetime parole.

But Ligon, resentenced to 35 years to life in 2017, rejected the very idea of parole after nearly seven decades in prison.

“I like to be free,” he said. “With parole, you got to see the parole people every so often. You can’t leave the city without permission from parole. That’s part of freedom for me.”

Other prisoners tried to coax him out into the free world. John Pace, a former juvenile lifer and now a reentry coordinator for the Youth Sentencing & Reentry Project (YSRP), recalled a fruitless visit to the prison with a group of other ex-lifers. “If you want to fight, fight it when you get out,” he counseled Ligon at the time.

But Ligon refused to apply for parole, let alone take any required programs.

So Bridge fought three more years to get him released with time served — and won a victory that has given hope to hundreds of other juvenile lifers still on parole.

In federal court, he argued that Ligon’s mandatory maximum sentence of life was unconstitutional.

“The constitution requires that the entire sentence, both the minimum and maximum terms imposed on a juvenile, be individualized — and a one size fits all cannot pass constitutional muster,” he wrote. The Philadelphia District Attorney’s Office agreed. And, on Nov. 13, 2020, Anita B. Brody, senior U.S. District Judge for the Eastern District of Pennsylvania, ordered Ligon resentenced or released within 90 days.

“That was no sad day for me,” Ligon said. He only wished his mother, his father, and his brother could have been there to see it.

The 90-day clock expired Thursday. So, for the first time, Ligon left behind prison walls and visited the public defenders’ Center City office, where files on his case take up an entire room. He seemed unfazed as he placed his face close to a high-tech temperature scanner, then cruised by the elevator up to the eighth floor.

Peering out the window, he saw a city transformed.

“I’m looking at all the tall buildings,” he said. “This is all new to me. This never existed.”

He found it unsettling that Eastern State Penitentiary, where he was once imprisoned, is now a museum and Halloween attraction. “That don’t suit my tastes,” he said. He had declined to be included in an exhibit. He feared it would imply “that I’m such a dangerous man, which I’m not.”

He grew up in a different world: a farm in Alabama, where he abandoned school in the third or fourth grade — he said he couldn’t stand being in big groups — much as he would reject educational offerings in prison.

“I’m just a stubborn type of person,” Ligon said. “I was born that way.”

His parents enrolled him in school in Philadelphia when he was 13, but he couldn’t keep up. He was still illiterate when he was arrested at age 15. He believes he was scapegoated as the new kid, the outsider.

A loner, he grew to pride himself on his janitorial skills. In Graterford prison, he learned to read and write. He trained as a boxer there, developing a military-style workout regimen he continues to this day, despite his arthritis.

He never applied for commutation, though he could have had a strong chance at clemency in the 1970s, when hundreds of Pennsylvania lifers were released. Instead, he put his faith in Bridge and waited for the day he’d be released. To prepare himself for modern society, he watched world news on a small TV in his cell.

His road to release, though, was riddled with obstacles. After the U.S. Supreme Court banned mandatory life terms for minors in 2012, Pennsylvania refused to apply the ruling retroactively. Another ruling in 2016 ordered the state and others to do so.

Then, mitigation specialists had to prepare for his resentencing, tracking down school transcripts and prison records spanning more than half a century. “Every infraction, every transfer, that was the way to put his [biography] together,” said Billi Charron, who was tasked with compiling his history and a home plan.

Ligon’s aversion to parole kept him locked up for years after that, until the November ruling set the 90-day deadline for his release.

That left Ligon’s supporters scrambling to line up everything he’d need to come home.

Charron, Pace, and Eleanor Myers, a senior advisor at YSRP, volunteered to assist — a process that ultimately included support from 10 city agencies, the Pennsylvania Department of Corrections, and various nonprofit organizations. Philadelphia’s Reentry Coalition directed Myers to Philadelphia Corporation for Aging, which found Ligon a place in domiciliary care, a foster-care-like accommodation with a family in Philadelphia.

“Then we had to figure out how to pay for it,” said Myers. The Philadelphia Office of Homeless Services agreed to cover the first year, while a benefits specialist is helping to get Social Security lined up after that. A modest crowdfunding campaign helped cover incidentals. (Update: After Ligon’s release, organizers had to cut off donations for fear the income would make him ineligible for benefits.)

“We have this extraordinary community that has rallied to make this happen,” Myers said.

Pace, meanwhile, picked out sweaters and socks he thought Ligon would like. He found a phone with no data plan, figuring Ligon won’t need it. He drove around the neighborhood where Ligon will be staying, checking out the parks and other attractions so he can show Ligon around. And, he solicited advice from other long-serving former lifers. “Just take it slow with Joe,” they advised.

When Pace, 52, first came home nearly four years ago, he felt physically ill from the overstimulation — a sort of emotional equivalent of the bends. “Let’s say mine was on a 2. His is going to be on a 10,” Pace said. “He’s been locked up so long, everything changed.”

At the back of his mind, for now, is whether the legal victory in Ligon’s case could be his own pathway off of lifetime parole.

To Bridge, Ligon’s case is a powerful example of punishment taken to senseless extremes.

“We waste people’s lives by over-incarcerating and we waste money by over-incarcerating. His case graphically demonstrates the absurdity of wasting each,” Bridge said Thursday, before dropping Ligon off at his new home. “Hopefully his release, and the release of the juvenile lifers in general, will cause a reevaluation of the way we incarcerate people.”