US Cold Snap: Why Is Texas Seeing Arctic Temperatures? 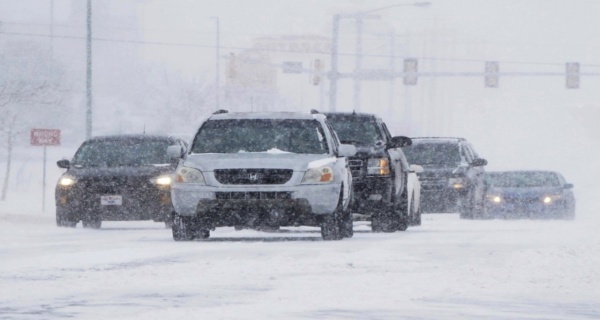 Texas is known for its sprawling deserts and excruciating heatwaves - but right now, it's blanketed in a thick layer of ice.

The state is seeing some of its coldest temperatures in more than 30 years, with some areas breaking records that are more than a century old.

Parts of Texas hit 0F (-18C) on Sunday, and weather warnings are going to stay in place through the week.

So why is this normally boiling state suddenly freezing over?

According to the US National Weather Service (NWS), this is down to an "Arctic outbreak" that originated just above the US-Canada border, bringing a winter snow storm as well as plummeting temperatures.

Cold air outbreaks such as these are normally kept in the Arctic by a series of low-pressure systems, the NWS said. However, this one moved through Canada and spilled out into the US last week.

Temperatures in the city of Dallas for example will reach a high of 14F (-10C) on Monday when it should be more like 59F (15C) at this time of year.

For the first time in the US state, all 254 counties are under a winter storm warning, US media report. The temperature in Dallas is already colder than in Anchorage, Alaska, CBS News reports.

In a statement on Sunday night, President Joe Biden declared an emergency in Texas, which authorizes US agencies to coordinate disaster relief in the state.

Rotating power outages have been initiated by the state's power grid operator, the Electric Reliability Council of Texas (Ercot), early on Monday, to reduce demand on the electricity system.

"Traffic lights and other infrastructure may be temporarily without power," it added in a tweet.

It has also issued a level-three energy emergency alert, urging consumers to reduce electricity use.

Hundreds of flights in and out of the state have also been canceled.

"The expansive dome of sub-freezing temperatures across the northern tier of the country has laid the foundation for winter storms to wreak havoc from coast to coast, not only going into this weekend, but also into next week," the NWS said in a statement released on Friday.

Weather warnings for severe winter conditions are going to remain in place until at least Tuesday, when the weather system will begin to move north.

Amarillo will see a high temperature of just 2F (-17C), breaking the city's previous record of 12F (-11C) that was set in 1895, a forecaster from the service's Weather Prediction Centre, Marc Chenard, told Reuters news agency.

Similarly, Lubbock will only reach a high of 9F (-13C). These temperatures are "40 to 50 degrees [Fahrenheit] below average", Mr Chenard said.

Parts of Oklahoma and the Texas panhandle are predicted to see as much as a foot of snow this week, while Dallas will have four inches.