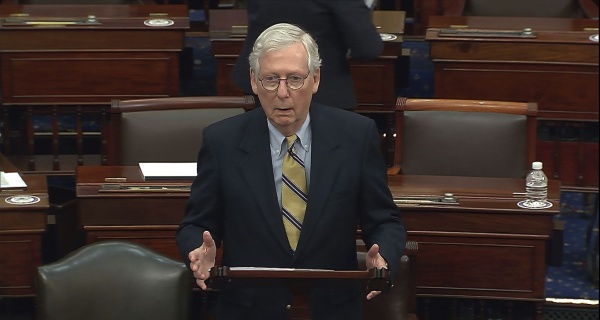 There were 43 Republican senators who failed to uphold their oath of office by voting to acquit Donald Trump and potentially created a January exception for future outgoing presidents.

Forty-three Republican Senators betrayed their country Saturday by voting to acquit former President Donald Trump in his second impeachment trial for inciting a violent mob against many of them and their colleagues. The majority of these senators were too afraid to vote for conviction due to potential backlash from Trump’s fanatical supporters, who have become a festering contaminant within the Republican party.

On January 6, then-President Trump rallied thousands of his followers to march to the U.S. Capitol, where Congress was scheduled to count the electoral votes and certify Joe Biden as the 46th President. As a result of Trump’s “red hats” storming the Capitol, four Trump supporters and Capitol Police Officer Brian Sicknick were killed. According to the police union, approximately 140 officers were wounded that day, including one officer losing a finger and another officer losing an eye.

Last Tuesday, Republican Sens. Susan Collins of Maine, Bill Cassidy of Louisiana, Lisa Murkowski of Alaska, Mitt Romney of Utah, Ben Sasse of Nebraska, and Pat Toomey of Pennsylvania joined their Democratic colleagues in voting that the second impeachment trial of Trump was constitutional. On Saturday, former chair of the Senate Intelligence Committee Sen. Richard Burr of North Carolina voted along with these six Republican senators to convict Trump of high crimes and treason.

“Former President Trump’s actions that preceded the riot were a disgraceful, disgraceful dereliction of duty,” former Senate Majority Leader Mitch McConnell stated Saturday after voting to acquit Trump. “Trump is practically and morally responsible for provoking the events of the day.”

Shortly after the vote, Senate Majority Leader Chuck Schumer took to Twitter and wrote, “My fellow Americans—Remember January 6. The panic and gunshots, hateful and racist Confederate Flag in the Capitol, screams of a bloodied officer, Capitol Police Officers who lost their lives, how close democracy came to ruin. Let it live in infamy—Trump’s final terrible legacy.”

Speaker of the House Nancy Pelosi tweeted, “It’s pathetic that @LeaderMcConnell kept the Senate shut down so that Article of Impeachment couldn’t be received & used that as his excuse for voting to acquit.”

Independent Sen. Angus King of Maine wrote, “The insurrection at the Capitol would not have happened ‘but for’ Donald Trump’s lies about the election’s legitimacy and his repeated calls for supporters to gather in Washington on January 6. For that reason, I voted to convict.”

Independent Sen. Bernie Sanders of Vermont tweeted, “It is truly sad and dangerous that only 7 Republicans voted to convict a president who is promoting a Big Lie, conspiracy theories and violence, and is aggressively trying to destroy American democracy.”

The list of 43 Republican senators who failed to uphold their oath of office by voting to acquit Trump and potentially creating a January exception for future outgoing presidents includes: