How Right-Wing Radio Stoked Anger Before the Capitol Siege 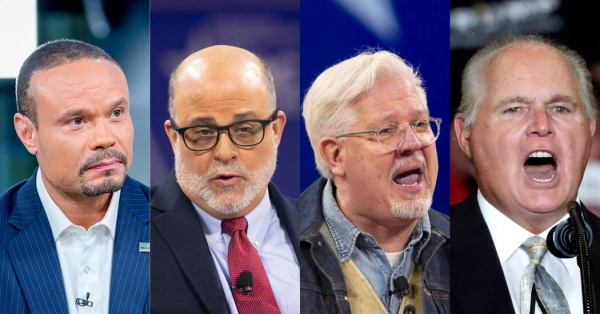 Shows hosted by Rush Limbaugh, Sean Hannity, and other talk radio stars promoted debunked claims of a stolen election and urged listeners to “fight back.”

Two days before a mob of Trump supporters invaded the United States Capitol, upending the nation’s peaceful transition of power and leaving at least five people dead, the right-wing radio star Glenn Beck delivered a message to his flock of 10.5 million listeners: “It is time to fight.”

“It is time to rip and claw and rake,” Mr. Beck said on his Jan. 4 broadcast. “It is time to go to war, as the left went to war four years ago.”

A former Fox News host, Mr. Beck had speculated for weeks about baseless claims of voter fraud in the presidential race. He told listeners that Donald J. Trump had taught conservatives that “you don’t have to cower anymore, you don’t have to back down when ridiculed into oblivion. You can fight back.”

Mr. Beck did not lobby for his listeners to invade the Capitol, and a day later, he urged marchers in Washington “to really kind of channel your inner Martin Luther King,” adding that violence is “just not who we’ve ever been.” But the language he used on his Jan. 4 show was typical of the aggressive rhetoric that permeated conservative talk radio in the weeks before the Washington siege.

Talk radio is perhaps the most influential and under-chronicled part of right-wing media, where the voices of Mr. Beck, Sean Hannity, Rush Limbaugh, and other star hosts waft through the homes, workplaces, and commutes of tens of millions of listeners. Before the riot, the shows were often unrestrained forums for claims of rigged voting machines and a liberal conspiracy to steal the presidency for Joseph R. Biden Jr.

Mark Levin, who reaches an estimated 11 million listeners a week, said in a Christmas broadcast that stealing elections “is becoming the norm for the Democrat Party” and called on his listeners to “crush them, crush them. We need to kick their ass.”

Bill Cunningham, a syndicated host in Cincinnati, told listeners on Jan. 4: “I will never surrender and collapse and act as if it’s OK when hundreds of thousands have voted illegally.” On Jan. 5, as Trump supporters started to converge on Washington, Dan Bongino, the host of a popular podcast and nationally syndicated radio show, said that Democrats “rigged the rules to make sure that any potential outcome would go their way.”

Mr. Bongino took pains to tell his audience they should ignore his use of the phrase “Vice President-elect Kamala Harris” during a recent appearance on Fox News, where he is a frequent guest. “I’m conceding nothing!” he said, blaming the “gaffe” on a network teleprompter.

That clarification hinted at the often unguarded nature of talk radio, where hosts indulge in edgier fare than on TV networks like Fox News, and listeners call in to say what they really think, insulated from the scrutiny of people they disagree with.

The result is something of an id of American conservative thought. Hosts’ intemperate remarks on race, immigration, and other subjects lend the shows a renegade feel and keep listeners loyal and emotionally invested.

“It’s like your friend in the bar,” said Lewis A. Friedland, a professor who studies talk radio and politics at the University of Wisconsin-Madison, where stations serve up six or more hours of right-wing talk a day. “He’s your buddy, and he’s kind of like you and he likes the same kind of people that you like and doesn’t like the same kind of people that you don’t like.”

Mr. Limbaugh led the rise of right-wing talk in the late 1980s, after deregulation of the radio industry paved the way for harder-edged shows. In recent years, even as its audience aged and podcasts ate into its market share, radio received a jolt from President Trump, a fan of the genre who catapulted its grievances into policy. Last year, Mr. Trump awarded Mr. Limbaugh the nation’s highest civilian honor, the Presidential Medal of Freedom.

“We always had shock jocks,” said Michael Harrison, publisher of the talk-radio trade magazine Talkers. “But then we had a shock president.”

Just as Mr. Trump echoed the blunt language of talk radio, its hosts defended the president’s acidic language and frequent falsehoods — even when he claimed, without evidence, that the election had been stolen.

Leading radio anchors did not explicitly urge an assault on the Capitol, and Mr. Trump often spoke more brazenly than his media counterparts, including in a speech to his supporters in Washington just before the riot. But it was no accident that regular listeners to Mr. Limbaugh and others believed that a grave misdeed had occurred in the 2020 vote count.

On Dec. 16, Mr. Limbaugh — the country’s No. 1 radio host, with an audience of about 15.5 million a week — told listeners that Mr. Biden “didn’t win this thing fair and square, and we are not going to be docile like we’ve been in the past, and go away and wait till the next election.”

“Seventy-four-plus million Americans are not going to shut up, and you tell them that their views don’t matter?” Mr. Limbaugh thundered. “You do not know what you’re creating. You do not know the enemy you are manufacturing.”

Mr. Limbaugh’s program is distributed by Premiere Networks, a division of the radio conglomerate iHeartMedia, which is also the force behind Mr. Beck, Mr. Cunningham, and Mr. Hannity’s shows. Cumulus Media, another conglomerate, produces Mr. Bongino and Mr. Levin.

Like other hosts who depend on a corporate paycheck, Mr. Limbaugh often hedges before his language goes too far. Later in the Dec. 16 episode, when a caller urged a march on Washington on Jan. 6, Mr. Limbaugh said, “I have mixed emotions about it” and suggested that electoral wins would be more effective.

This type of push-and-pull — stoking listeners’ anger, then pulling back and disavowing the more extreme views voiced by callers — is typical of corporate right-wing radio hosts, whose success relies on provocation but whose multimillion-dollar paychecks depend on staying within the bounds of their publicly traded distributors.

On Dec. 9, Mr. Limbaugh declared, “I actually think that we’re trending toward secession,” before beating a retreat on the next day’s show. “I am not advocating it, have not advocated it, never have advocated it, and probably wouldn’t,” he said. He later accused liberals of using “force and intimidation and bullying tactics to get people who disagree with them to shut up.”

Mr. Hannity, on his Dec. 18 radio show, said of the election: “There’s no doubt this was stolen. No doubt whatsoever.” But he balked on Jan. 5, when a caller named Kim referred to Gretchen Whitmer, the Democratic governor of Michigan, as “Governor Hitler.”

“Easy, now,” Mr. Hannity said. “When you make those references, everyone says, ‘Hannity allowed someone to make a Nazi comparison!’”

The most incendiary language surfaced outside the mainstream of conservative talk, on fringier fare that commands listeners despite smaller distribution. In late December, on “The Alex Jones Show” — produced by the conspiracy theory site Infowars and carried by about 85 stations — the pro-Trump commentator Nick Fuentes called for Trump supporters to “occupy the Capitol.”

“We’re only getting angrier and angrier, and pretty soon that’s going to metastasize in ways that the elites don’t like,” he added.

In the immediate aftermath of the Capitol riot, radio executives seemed to acknowledge concerns about a possible link between the violence and the shows.

Cumulus, based in Atlanta, issued an internal memo on Jan. 6: “We need to help induce national calm NOW.” The memo added that the company “will not tolerate any suggestion that the election has not ended” and that any transgression could result in termination.

Last month, WABC-AM in New York, which airs shows from Mr. Levin and other pro-Trump hosts like Rudolph W. Giuliani and Jeanine Pirro, told its staff “to not state, suggest or imply that the election results are not valid or that the election is not over.”

The First Amendment gives broad latitude to what hosts can say on the air. Recently, though, defamation lawsuits, or the threat of them, have emerged as a potential check. Smartmatic, an election technology firm, filed a $2.7 billion lawsuit last week against the Fox Corporation and three Fox anchors, accusing them of broadcasting false statements that damaged the company.

Sidney Powell, the Trump lawyer named in the Smartmatic suit that accused Fox News of spreading false claims, voiced similar falsehoods on Mr. Limbaugh’s show after Election Day. (Mr. Limbaugh would later complain that Ms. Powell had not produced evidence of fraud, but she reappeared on his program on Dec. 29, with little pushback from a guest host.)

Unlike cable TV, talk radio is difficult to monitor — broadcasts often vanish into the ether and transcripts are scarce. A system maintained by researchers at the Massachusetts Institute of Technology, which monitors radio broadcasts, transcribed what was said on leading conservative programs between Nov. 22 and Jan. 5.

After the Capitol riot, the same hosts denounced the violence. “Every good, decent honorable American would condemn all violence,” Mr. Hannity said on Jan. 6.

In the same broadcast, the host reminded his listeners that “hundreds and hundreds” of people had claimed to have witnessed fraud or irregularities in the election. “People feel like their voices aren’t being heard, and they’re angry,” Mr. Hannity said.

He then welcomed a frequent caller to the show, the pro-Trump activist Rose Tennent, who offered no criticism of the violence in Washington.