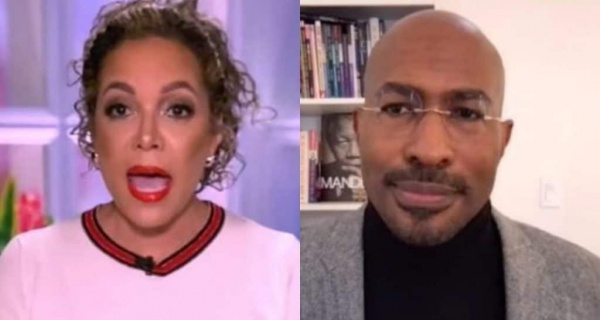 ‘People In The Black Community Don’t Trust You’: Sunny Hostin Gathers Van Jones Over His Flip-Flopping

Jones, who is a CNN analyst, appeared on Friday’s episode of the ABC chatfest to talk about his new documentary “The Reunited States,” which he co-produced with The View co-host Meghan McCain. The theme of the doc is unity, but he was taken to task by Hostin for his emotional response to President Joe Biden’s win.

After Biden was announced the winner of the November presidential election, Jones cried tears of joy on CNN.

Hostin mentioned that Jones’s words had often been contradictory since he had so often praised Trump despite his volatile time in office.

“Now Van, you do spend a lot of time threading the middle and trying to unite people,” Hostin began. “But there are those who accuse you of being a political opportunist—a chameleon, so to speak—who provided racial cover for former, disgraced, twice impeached President Trump.”

Jones nervously smiled as Hostin recounted all the times Jones attempted to give Trump “credit” during his presidency.

“Yet just recently you cried on CNN when Joe Biden was elected the 46th president, and you said it’s easier to be a parent now, character matters now, truth matters,” she continued. “You even mentioned George Floyd and said a lot of people felt they couldn’t breathe. People in the Black community don’t trust you anymore. What is your response?”

Jones pushed back and insisted his words had been taken out of context.

He then gave nuance to what he previously said.

“People may not like everything I’ve said on television and I try to be balanced,” the CNN pundit said. “But look at what I have done. Who among my critics have been able to get people together to help folks at the bottom? When we fight like this about everything and you can’t give anybody even a little bit of credit for anything, who it hurts is not the politicians, it’s not the pundits, it’s regular folks who don’t have anything.”

Co-host Ana Navarro was in agreement with Hostin.
“Sunny is right,” she said. “You’ve lost a lot of people who trusted you and who saw you as a voice because of the positions you took during Trump.”

Navarro also mentioned that Jones worked with Jared Kushner for criminal reform despite Kushner, who was a senior advisor to Trump, wanting him fired during the 2016 campaign.

Jones insisted he had “no regrets” and is “proud” of his work with the administration.

McCain defended Jones as being able to work across the aisle in a bipartisan manner.
“I want to say you have been such a life raft to me, and given me so much hope to live in the spirit of how my dad taught me to,” she said.

Twitter also weighed in, and most sided with Hostin and giddily cheered her, bringing out the “receipts” of what many perceived to be Jones’ double talk.