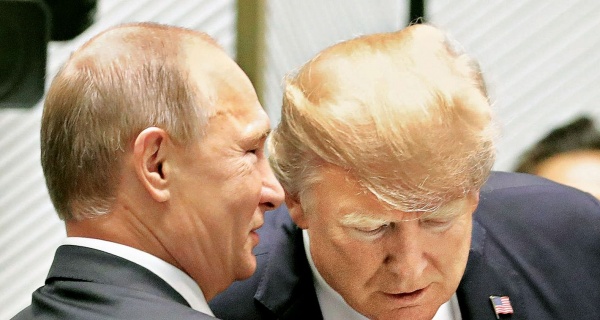 Donald Trump was cultivated as a Russian asset over 40 years and proved so willing to parrot anti-western propaganda that there were celebrations in Moscow, a former KGB spy has told the Guardian.

Yuri Shvets, posted to Washington by the Soviet Union in the 1980s, compares the former US president to “the Cambridge five”, the British spy ring that passed secrets to Moscow during the second world war and early cold war.

Now 67, Shvets is a key source for American Kompromat, a new book by journalist Craig Unger, whose previous works include House of Trump, House of Putin. The book also explores the former president’s relationship with the disgraced financier Jeffrey Epstein.

“This is an example where people were recruited when they were just students and then they rose to important positions; something like that was happening with Trump,” Shvets said by phone on Monday from his home in Virginia.

Shvets, a KGB major, had a cover job as a correspondent in Washington for the Russian news agency Tass during the 1980s. He moved to the US permanently in 1993 and gained American citizenship. He works as a corporate security investigator and was a partner of Alexander Litvinenko, who was assassinated in London in 2006.

Unger describes how Trump first appeared on the Russians’ radar in 1977 when he married his first wife, Ivana Zelnickova, a Czech model. Trump became the target of a spying operation overseen by Czechoslovakia’s intelligence service in cooperation with the KGB.

According to Shvets, Joy-Lud was controlled by the KGB and Kislin worked as a so-called “spotter agent” who identified Trump, a young businessman on the rise, as a potential asset. Kislin denies that he had a relationship with the KGB.

Then, in 1987, Trump and Ivana visited Moscow and St Petersburg for the first time. Shvets said he was fed KGB talking points and flattered by KGB operatives who floated the idea that he should go into politics.

The ex-major recalled: “For the KGB, it was a charm offensive. They had collected a lot of information on his personality so they knew who he was personally. The feeling was that he was extremely vulnerable intellectually, and psychologically, and he was prone to flattery.

“This is what they exploited. They played the game as if they were immensely impressed by his personality and believed this is the guy who should be the president of the United States one day: it is people like him who could change the world. They fed him these so-called active measures soundbites and it happened. So it was a big achievement for the KGB active measures at the time.”

Soon after he returned to the US, Trump began exploring a run for the Republican nomination for president and even held a campaign rally in Portsmouth, New Hampshire. On 1 September, he took out a full-page advert in the New York Times, Washington Post and Boston Globe headlined: “There’s nothing wrong with America’s Foreign Defense Policy that a little backbone can’t cure.”

The ad offered some highly unorthodox opinions in Ronald Reagan’s cold war America, accusing ally Japan of exploiting the US and expressing skepticism about US participation in Nato. It took the form of an open letter to the American people “on why America should stop paying to defend countries that can afford to defend themselves”.

The bizarre intervention was cause for astonishment and jubilation in Russia. A few days later Shvets, who had returned home by now, was at the headquarters of the KGB’s first chief directorate in Yasenevo when he received a cable celebrating the ad as a successful “active measure” executed by a new KGB asset.

“It was unprecedented. I am pretty well familiar with KGB active measures starting in the early 70s and 80s, and then afterwards with Russia active measures, and I haven’t heard anything like that or anything similar – until Trump became the president of this country – because it was just silly. It was hard to believe that somebody would publish it under his name and that it will impress real serious people in the west but it did and, finally, this guy became the president.”

Trump’s election win in 2016 was again welcomed by Moscow. Special counsel Robert Mueller did not establish a conspiracy between members of the Trump campaign and the Russians. But the Moscow Project, an initiative of the Center for American Progress Action Fund, found the Trump campaign and transition team had at least 272 known contacts and at least 38 known meetings with Russia-linked operatives.

He added: “This is what basically we decided to correct. So I did my investigation and then got together with Craig. So we believe that his book will pick up where Mueller left off.”

Unger, the author of seven books and a former contributing editor for Vanity Fair magazine, said of Trump: “He was an asset. It was not this grand, ingenious plan that we’re going to develop this guy and 40 years later he’ll be president. At the time it started, which was around 1980, the Russians were trying to recruit like crazy and going after dozens and dozens of people.”

“Trump was the perfect target in a lot of ways: his vanity, narcissism made him a natural target to recruit. He was cultivated over a 40-year period, right up through his election.”