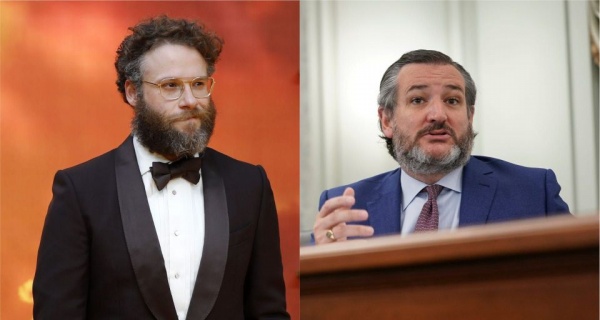 Seth Rogen and Sen. Ted Cruz have been engaged in a heated Twitter exchange for a few days now, sparring over everything from the Paris Climate Agreement to the Disney film “Fantasia.”

It all started on Inauguration Day, when Cruz criticized President Joe Biden for reentering the Paris Climate Agreement, to which Rogen responded: “Fuck off you fascist.”

Cruz then attached a screenshot of that interaction in another tweet, writing: “Charming, civil, educated response. @Sethrogen If you’re a rich, angry Hollywood celebrity, today’s Dems are the party for you. If you’re blue-collar, if you’re a union member, if you work in energy or manufacturing… not so much.”

Rogen fired back, “If you’re a white supremacist fascist who doesn’t find it offensive when someone calls your wife ugly, Ted Cruz is the exact motherfucker for you,” adding, “also I’m in four unions.”

The feud was reignited the next day, when Cruz quote tweeted MGM Studios’ post posing the question, “What was the first film you saw in theaters?” Cruz wrote, “Fantasia. It was playing at a film revival. It scared me; I cried – I was 4. My Mom had to take me out. Good times.”

On Jan. 22, Rogen replied: “Everyone who made that film would hate you.”

“They’re all dead. So I think we’re good. And Walt Disney was a Republican,” Cruz responded. “Even though you behave online like a Marxist with Tourette’s (screaming ‘F U! F U!’ is really, really clever), your movies are typically pretty funny. I’m sure you hate that I enjoy them.”

Rogen then informed Cruz that he actually does have a mild case of Tourette’s, adding: “I once again take great pleasure in telling you to go fuck yourself.” “Also VERY few cases of Tourette’s manifest in uncontrollable swearing. Most cases, like mine, manifest in twitching,” Rogen continued.

Rogen followed that tweet up with, “All jokes aside, @tedcruz is a fascist piece of shit,” to which Cruz replied: “All jokes aside, @Sethrogen is a moron. It’s your party that believes in govt power: to shut your business, to oppress your faith & to censor your speech. Anyone who disagrees, they try to cancel. BTW, a lot of folks in Hollywood are conservative – & muzzled by the fascist Left.”

This seemed to be the last straw, for Rogen, who shot back: “You literally inspired a deadly insurrection you stupid fuck.”

Cruz has yet to respond to this tweet, but Rogen continued to explain his dislike for Cruz, bringing up the Jan. 6 attack on the Capitol and Cruz’s support of Trump’s efforts to overturn the election results. “This isn’t a Twitter ‘feud.’ @tedcruz tried to overthrow our government,” Rogen tweeted. “He inspired a deadly mob to storm the Capitol. And I think that deserves ridicule. So fuck him.”

“Your lies got people killed,” Rogen added in another tweet. “You have blood on your hands.”

Notable members of Hollywood joined in to defend Rogen, praising him for calling out Cruz.

“Ted Cruz doing clumsy Trump cosplay is so embarrassing,” Billy Eichner wrote. “Sweetie, you don’t have *it*. You are simply NOT a star! Sorry!”

Joseph Gordon-Levitt, who costarred with Rogen in “50/50” and “The Night Before,” jumped in to help explain Rogen’s anger toward the Senator.

“Mr. Senator, as @sethrogen’s non-threatening buddy, perhaps I can translate ‘fascist’ into more charming and civil terms,” Gordon-Levitt wrote. “Your support of the former President’s attempts to baselessly overturn a democratic election is reminiscent of supporters of Hitler, Mussolini, and others.”

Michael Herbert Schur, co-creator of “Parks and Recreation” and “The Office” who goes by Ken Tremendous on Twitter, wrote: “Hi, @tedcruz is desperate to pick a fight with @Sethrogen so everyone talks about that and not the fact that he made a bad-faith attempt to overthrow a fair election in order to cynically grab Trump’s base and run for President in 2024. Let’s focus on the latter.”