Don Jr. Picks Up Where His Dad Left Off: Trump's Son Continues Tradition Of Twitter Lies 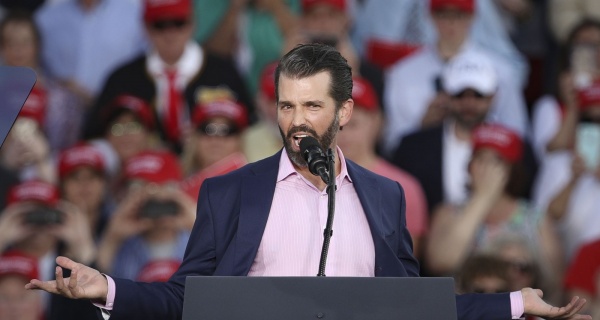 Don Jr. is taking on the family mantle of tweeter-in-chief to level fallacious attacks at President Biden

With his father now permanently barred from Twitter, President Trump's son, Donald Trump Jr., has taken it upon himself to continue the family legacy of attacking Joe Biden with lie-laden accusations on Twitter.

Don Trump Jr., who has both steadfastly defended and participated in his father's many improprieties, has positioned himself as one of the biggest right-wing provocateurs of the Trump era. A self-styled cultural critic and political analyst, Don Jr. has already "written" two books on "leftist hate", "liberal privilege," and "Biden's half-century of being a swamp monster."

On Thursday, Twitter witnessed just one of Don Jr.'s latest provocations, when he shared a New York Times story about Portland, Oregon protestors getting tear-gassed by federal agents for destroying property and burning an American flag. "Joe Biden uses tear gas...," said Don Jr, confused, "That's how this is supposed to work right?"

While many users kindly reminded Don Jr. of his decreasing relevance to American politics, he nevertheless continued on with his tirade, indicting the media as a key contributor to Biden's "illegitimate" win.

"Imagine how much easier it is to run as a Democrat when you have a multi-billion dollar mainstream media complex willing to lie and run cover for you at all times!" Don Jr. tweeted, "Our media is broken." Sowing distrust in the "liberal" media is, of course, his father's calling card, which Don Jr. has inevitably inherited.

To make his case on media bias, Don Jr. exhibited two headlines: one from The Washington Post which read, "Trump campaign promotes false claim that Biden would end fracking" and the other, from right-wing news site Townhall: "Biden Administration: Yes, We Are Following Through With a Fracking Ban."

What Don Jr. failed to include, however, was any context for either. Because although the two headlines appear contradictory, both authors admit the same premise: that Biden vowed to ban fracking on federal land.

Don Jr. also bandied Senator Ted Cruz's absurd notion that "By [entering back into the Paris Climate Agreement], President Biden indicated that he's more interested in the views of the citizens of Paris than in the jobs of the citizens of Pittsburgh." Senator Cruz's sudden concern for the people of Pittsburgh runs in direct contrast to his failed effort to overturn the election, which would disenfranchise Pennsylvania voters. In fact, most of Allegheny County, where Pittsburgh is situated, voted overwhelmingly for Biden.

Don Jr. capped off his firestorm on Twitter with brevity. "Congratulations China," he tweeted, eliding any context. One might imagine that such vague embitterment stems from his father's distaste for the country, despite the family having strong financial ties to it. Don Jr.'s quip also confounds in the face of Biden's recent condemnation of China's sanctions on former Trump staffers.

Some have speculated that Don Jr. might pursue a political career of his own after four years of situating himself in the right circles. Indeed, The Post argued that his book Triggered read like a campaign book. It's unclear what will come of Don Jr. now that he is steeped in litigation. Hopefully, lawyers and federal officials will drain him of the necessary and "finite" energy to ever make a bid for public office.