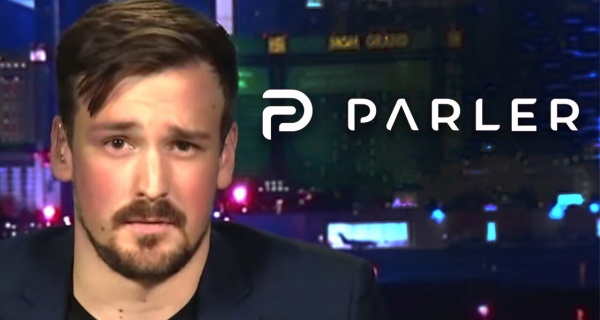 *Rep. Carolyn Maloney made the request in a letter to the FBI on Thursday

*Company is working with Russian firm DDoS-Guard to reestablish service

The House Oversight and Reform Committee has asked the FBI to investigate the role that Parler, a social media website and app popular with conservatives, played in the January 6 riot at the U.S. Capitol.

Rep. Carolyn Maloney, a New York Democrat who chairs the panel, cited press reports that detailed violent threats on Parler in her letter to FBI Director Christopher Wray on Thursday.

Maloney noted that numerous Parler users have been arrested and charged with threatening violence against elected officials, or for their role in participating in the attack.

Earlier this month, DailyMail.com revealed that Matze met Mukhutdinova in Las Vegas while she was on a two-week vacation in the U.S., though no suggestion has been made that she has improper oversight at her husband's company.

But Parler was forced offline early last week after Amazon revoked web-hosting services. It has partially returned online with the help of a Russian-owned technology company.

Founded in 2018, Parler, operates much like Twitter, with profiles to follow and 'parleys' instead of tweets. In the early days, its free-speech commitment drew hard-right and extremist voices, but more recently more traditional Republicans have signed up.

In her letter, Maloney suggested that the site could be used 'as a potential conduit for foreign governments who may be financing civil unrest in the United States.'

Maloney points to reports that Matze founded the company in 2018 soon after spending time in Russia with his wife, and claims that her family has 'reportedly has ties to the Russian government.'

This appears to refer to reports that Mukhutdinova's mother was a government functionary in the now-defunct Soviet Union.

Mukhutdinova's Instagram pictures show the couple have at least one child. In one picture she hold rifles and wears a t-shirt which reads: 'Trust me, I'm a Russian spy.'

The couple appear to live a luxury lifestyle with numerous vacation pictures taken with their young child.

Parler is privately held, and little is known about its ownership structure, but the company's publicly disclosed investors include conservative commentator Dan Bongino and hedge-fund investor Robert Mercer's daughter Rebekah.

Both Bongino and Rebekah were born in the U.S. and are American citizens, and it was not clear what evidence if any tied Parler to foreign financing.

Rebekah has described herself as a co-founder of the site with Matze. She is also thought to have studied at the University of Denver, which Matze attended.

'John and I started Parler to provide a neutral platform for free speech, as our founders intended, and also to create a social media environment that would protect data privacy,' she wrote in a post on the site this fall.

'The ever-increasing tyranny and hubris of our tech overlords demand that someone lead the fight against data mining, and for the protection of free speech online,' she added.

Matze replied to the post: 'Bekah is a great friend, an American patriot, and most importantly committed to the Parler vision of neutrality and data privacy. We are grateful for her support since 2018, and her early faith in the founders has enabled us to reach these heights. #transparency.'

After WSJ reported Rebekah's links to Parler she issued a statement saying that her multi-millionaire father Robert was not an investor in the site - while sources close to the clan claimed that the investment was a family affair.

Following the January 6 Capitol riot, Amazon pulled the plug on Parler's service, alleging its 'unwillingness and inability' to remove content 'inciting and planning the rape, torture, and assassination of named public officials and private citizens.'

It came after Google and Apple removed Parler from their app stores, effectively making it unavailable as a smartphone app.

Since then, Parler has worked with Russian technology company DDoS-Guard to resume service for its website.

DDos-Guard said earlier this week: 'At this time, Parler.com does not violate either our Acceptable Use Policy or the current US law to the best of our knowledge.'

The congresswoman asks the FBI to investigate whether Parler was used to plan the January 6 riot, whether the site retains evidence related to the attack, and whether foreign governments are using it as a platform to destabilize the U.S.

Some Parler users have been charged with threatening violence against elected officials or for taking part in the attack, according to Maloney.

She gave the example of a Texas man criminally charged for posting on Parler that he would return to the US Capitol and 'hunt these cowards down like the traitors that each of them are.'

Maloney said the oversight committee is conducting its own investigation and requested a meeting with FBI officials on the matter.

Since Parler partially returned online, CEO Matze shared a statement saying: 'Our return is inevitable due to hard work, and persistence against all odds. Despite the threats and harassment, not one Parler employee has quit. We are becoming closer and stronger as a team.'

'We will NEVER stop fighting. NEVER,' said Bongino, one of Parler's financial backers, who said on January 8 that he would never again post on Twitter.

'This fight is bigger than me, and it's bigger than Parler. If they're allowed to silence us, they can silence anyone. It stops now. Please stand with us in this fight for liberty, truth, and freedom,' Bongino said.