Two Virginia Cops Have Been Hit with Federal Charges in D.C. Riots. They Busted Themselves. 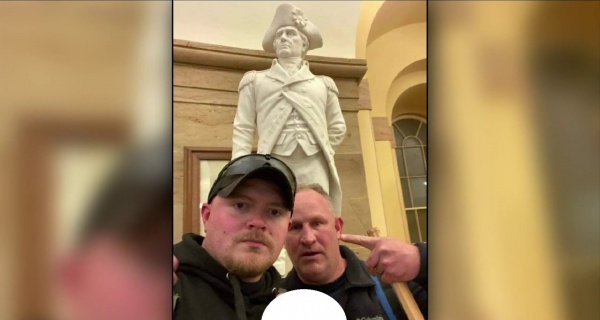 Two police officers with the Rocky Mount Police Department in Virginia have been charged for their roles in the D.C. insurrection of Jan. 6, 2021. K9 unit officer Jacob Fracker and his platoon sergeant Thomas Robertson were charged with federal misdemeanors on Wednesday. The piece of evidence that put them at the scene was a selfie posted to Facebook.

In the picture, Fracker is flipping the bird next to Robertson.

“CNN and the Left are just mad because we actually attacked the government who is the problem and not some random small business … The right IN ONE DAY took the f***** U.S. Capitol. Keep poking us,” Robertson allegedly said in social media posts.

Supporters of President Donald Trump raided the Capitol Building last Wednesday after POTUS repeated completely baseless claims that he actually won the 2020 election in a landslide. Five people died in the chaos. Trump supporter Ashli Babbitt, 35, was shot and killed by Capitol police. Three others–Rosanne Boyland, 34, Kevin Greeson, 55; and Benjamin Phillips, 50–died from what cops described as “medical emergencies.” The death of Capitol police officer Brian Sicknick is being investigated as a possible murder as he was allegedly struck with a fire extinguisher. A second Capitol police officer, Howard Liebengood, died by suicide on Saturday. Christopher Stanton Georgia, a 53-year-old Georgia man who was arrested in D.C. on Jan. 6, also died by suicide over the weekend.

The Rocky Mount Police Department put both Fracker and Robertson on administrative leave on Sunday.

“The Town of Rocky Mount fully supports all lawful expressions of freedom of speech and assembly by its employees but does not condone the unlawful acts that occurred that day,” the department said in a statement. This remains the case as of Wednesday.

Fracker said he was deployed to Afghanistan as a Marine, and currently serves with the Virginia Army National Guard. Robertson, a sniper in Operation Iraqi Freedom, is an Army veteran.

Both defendants have denied wrongdoing.

“There was absolutely no indication that we were anything but welcome to check out certain places,” Robertson told WSET. “We did not participate in any violence or property damage.”

He said Capitol police let them in, they walked through an open door, and officers also gave them water and asked them to stay inside the roped areas.

As an institution, Capitol police have been roundly criticized for being unprepared or, at worst, enabling those who stormed the Capitol. Two Capitol police officers were suspended, one for taking a selfie at the scene with an apparent rioter, and one for allegedly directing rioters and wearing a MAGA hat. 10 to 15 others were being investigated for their behavior last Wednesday, Rep. Tim Ryan (D-Ohio, 13th District) has said.