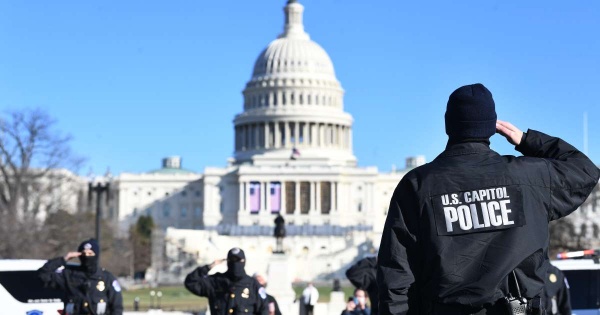 Finding out the Capitol Police was in cahoots with the attempted coup wouldn't be a huge surprise, if history is any indication.

An investigation into the U.S. Capitol Police‘s suspected involvement with the domestic terrorists who illegally stormed the Capitol last week has drawn attention to the infiltration of white supremacists in the ranks of both law enforcement and the American military.

Multiple officers with the U.S. Capitol Police have been suspended for their roles in all but aiding and abetting members of the mob that attempted a coup in a purported protest of baseless claims of election fraud. More than a dozen other officers are under investigation for possible offenses ranging from posting messages of support for the mob of domestic terrorists to “inappropriate” anti-Joe Biden activity online, the Washington Post reported.

Those developments came on the backdrop of Capitol Police scrutiny that the department wasn’t properly prepared for the thousands of Trump supporters who were expected to become violent at the so-called “Stop The Steal” protest.

Video footage and photos from the Capitol siege showed several Capitol Police officers engaged in questionable activity that included one instance of taking a selfie with someone who obviously had illegally broken into and entered the U.S. Capitol.

In another instance, a Capitol Police officer could be seen with one of the people who illegally stormed the hallowed federal building and helping that person down the Capitol stairs.

If history was any indication, chances are the police response would have been decidedly different had it been a group of Black people planning to execute the same type of event.

Case and point: In Connecticut, a police chief not only revealed a member of his department was a part of the far-right, white supremacist Proud Boys — the same group that organized and participated in the Capitol coup — but he also kept that same cop on the force in 2019. East Hampton Police Chief Dennis Woessner claims he did a department inquiry and concluded that Officer Kevin P. Wilcox didn’t violate any department policies.

During that same year, recent graduates of a corrections officers’ training program posed for a photo while proudly throwing up Nazi salutes.

That is to say nothing of Christopher Paul Hasson, the now-former U.S. Coast Guardsman who was found with a stockpile of illegal drugs and weapons in his home that was allegedly part of a plot to commit acts of mass terrorism. Hasson even had a hit-list that named Sen. Cory Booker and Rep. Maxine Waters.

Not to be outdone, a lawyer published a searchable database that shows thousands of racist social media posts made by thousands of police officers around the country. The Plain View Project 5,000 posts and comments made by police officers through verified accounts. About 2,800 of the officers, some of them high-ranking, were still on the job as of June 2019.

In Philadelphia, the Inquirer reported that 15 of the city’s high-ranking officers are in the database because of racist, misogynist, Islamophobic and pro-violence posts. One Facebook post made by Captain George Mullen was a meme featuring the image of the late Sammy Davis Jr. holding a microphone and pointing to the viewer. The words going across the image stated: “Instead Of Hands Up Don’t Shoot How About Pull Your Pants Up Don’t Loot.”

At the St. Louis Police Department one officer, Ronald Hasty, who went by the name “Ron Nighthawk” on Facebook, posted several racist memes, including one with a Confederate flag and the words “If The Confederate Flag Is Racist, So Is Black History Month.” He also shared another post by a group called “Proud to be a White American” that read “March is national ‘Stop Blaming White People Month!’ Accept responsibility for your own bad choices. Hug a white person!”

The Portland Police Department in Oregon has become especially notorious for its apparent embracing of white nationalists applying to be cops there. That included one officer who exchanged hundreds of text messages with the leader of the far-right group Patriot Prayer, which has organized violent demonstrations in the city.

And in Oklahoma, the Achille Police Department knowingly hired an open white supremacist who used to be the Texas coordinator of a skinhead group called Blood and Honor, an international coalition of racist skinhead gangs.

To be sure, not all of the Capitol Police Department has eggs on its face. Officer Eugene Goodman is being hailed as a hero for exhibiting self-restraint and not using weapons against the Capitol coup mob that he diverted away from the Senate floor. And Officer Brian Sicknick was attacked by the supposed pro-police mob, which “bludgeoned” him with a fire extinguisher, causing his death hours later.

However, it’s impossible to ignore that historically, police departments were an instrument to enforce segregation and other racist policies. It’s no wonder that the FBI has warned about ongoing relationships between white supremacists and police departments.

Speaking of the FBI, it also warned on Monday of more domestic terror at all statehouses across the country next week.