A W.N.B.A. Team Co-Owned By Loeffler Helped Warnock Defeat Her. What Happens Now? 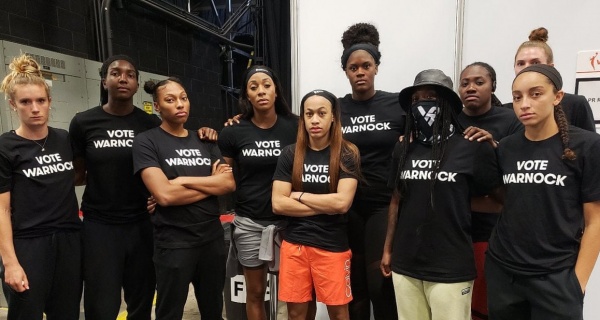 On Tuesday morning, the Rev. Raphael Warnock made a final pitch to voters in Georgia with a video released on social media that prominently featured W.N.B.A. players campaigning on his behalf against the Republican incumbent, Senator Kelly Loeffler, who also happens to be a co-owner of a franchise, the Atlanta Dream.

The players got what they wanted. Mr. Warnock, a Democrat, defeated Loeffler in an outcome that six months ago would have been considered an upset. The attention W.N.B.A. players brought to Mr. Warnock’s campaign is widely considered to have played a role in his victory, renewing questions about how the league can move forward with an owner who is opposed by most of its players.

Over the summer, Ms. Loeffler openly criticized the league for dedicating its 2020 season to social justice, after the W.N.B.A., taking a cue from players like Angel McCoughtry of the Las Vegas Aces, said its games would honor the Black Lives Matter movement.

Ms. Loeffler spent much of the rest of her Senate campaign blasting Black Lives Matter, accusing the movement of holding “anti-Semitic views” and promoting “violence and destruction across the country.” That prompted the W.N.B.A. players’ union to tweet: “E-N-O-U-G-H! O-U-T!” The W.N.B.A. commissioner, Cathy Engelbert, told ABC in July that “Kelly’s views are not consistent with those of the W.N.B.A. and its players.”

Ms. Loeffler dug in and escalated her language. In August, led by players like the Dream’s Elizabeth Williams and the Seattle Storm’s Sue Bird, teams across the league took the dramatic step of wearing shirts before a game that read “Vote Warnock.” The demonstration elevated Warnock’s profile among people who had not been following the race, and prompted a flood of donations to his campaign.

Ms. Loeffler said during the campaign that the players’ speaking out against her was an example of “cancel culture.”

It is not clear whether the end of the campaign and Ms. Loeffler’s loss in the election will prompt changes in the dynamic between her, the Dream players, and the W.N.B.A. The team’s majority owner, Mary Brock, has expressed an interest in selling her stake, but Ms. Loeffler, who owns 49 percent of the team, has said she plans to keep her piece of the franchise. Some athletes have called for Ms. Loeffler to sell, but Ms. Engelbert told CNN in July that Ms. Loeffler would not be forced to do so.

In August, ESPN reported that Baron Davis, the former N.B.A. player, was part of an investment group interested in buying the Dream. The N.B.A. star LeBron James added intrigue of his own to the discussion, posting on Twitter early Wednesday: “Think I’m gone put together an ownership group for The Dream. Whose in? #BlackVotesMatter.” Renee Montgomery, a Dream player who sat out last season to focus on social justice reforms, joined in: “I’m ready when you are.”