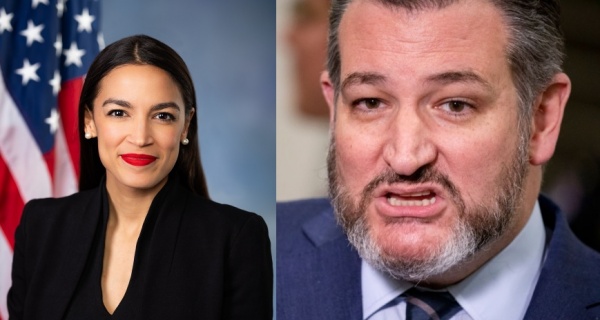 *He also called AOC a lair, which she shot back at in another tweet

*Leading a debate in the Senate on ensuring election integrity is doing our jobs,' Cruz tweeted at AOC

Alexandria Ocasio-Cortez upped the Twitter feud with Ted Cruz on Thursday evening by calling him out for pleading for money in a fundraising text sent after protesters descended on the Capitol Wednesday.

'@AOC You are a liar,' Cruz tweeted Thursday after she claimed he was responsible for inciting the pro-Trump mob to obstruct Congress certifying the election for Joe Biden.

'Oh - you're accusing me of lying? Isn't this you?' Ocasio-Cortez shot back. 'Your campaign sent out this fundraising message as people were sieging the Capitol. You claimed to be 'leading the fight to reject electors.'

'Clashes started around 1:20 pm. This message was sent after the Capitol was breached,' she pointed out.

Ocasio-Cortez attached an image of a text message to her tweet with the message the Texas senator's team sent out on Wednesday.

'Ted Cruz here,' the text message to supporters begins. 'I'm leading the fight to reject electors from key states unless there is an emergency audit of the election results.'

It adds: 'Will you stand with me?' along with a link to donate to him.

Ocasio–Cortez, in her third tweet in her thread against Cruz, demanded in a straightforward post that he: 'Resign.'

'Your complete refusal to acknowledge any of the above harm, wrongdoing, or even misjudgment; & your lack of any self-reflection in how these acts contributed to yesterday's chaos is alarming. It is unbecoming of any elected official and makes you unfit for the office you occupy,' she wrote in the thread.

The New York representative's demand for Cruz's resignation was a repeat after he said in an earlier tweet Thursday that he 'ain't going anywhere,' claiming he was 'doing his job' by objecting to the Electoral College results.

'Leading a debate in the Senate on ensuring election integrity is doing our jobs, and it's in no way responsible for the despicable terrorists who attacked the Capitol yesterday,' he posted.

'And sorry, I ain't going anywhere,' he continued in a two-part thread. 'When you and your socialist buddies try to massively raise taxes, when you try to pass the green new deal & destroy millions of jobs, when you push for amnesty when you try to pack the Supreme Court w/ activists to undermine our Constitutional rights...I will fight that every step & stand with the People.'

'Sen. Cruz, you must accept responsibility for how your craven, self-serving actions contributed to the deaths of four people yesterday,' Ocasio-Cortez wrote on Twitter Thursday.

'Both you and Senator Hawley must resign,' the progressive representative demanded. 'If you do not, the Senate should move for your expulsion.'

In a 3:00 a.m. tweet Thursday morning, Cruz released a statement regarding the breach of the Capitol building hours earlier by thousands of protesters attempting to obstruct Congress from certifying the election for Joe Biden.

'The attack at the Capitol was a despicable act of terrorism and a shocking assault on our democratic system,' Cruz wrote in his statement. 'We must come together and put this anger and division behind us. We must, and I am confident we will, have a peaceful and orderly transition of power.'

His statement sparked outrage from Ocasio-Cortez considering he still chose, earlier, to formally challenge the Electoral College results in a few states he felt did not conduct their 2020 presidential elections fairly – mainly traditional red states that swung blue this year.

As pressure mounted on Cruz, and others who followed his lead to challenge the election Thursday, it emerged that shortly after the riots started, Cruz's team sent out a fundraising plea via text to cash in on his demand to overturn Biden's victory.

'I'm leading the fight to reject electors from key states unless there is an emergency audit of the election results,' the tweet from the Texas senator read.

It adds: 'Will you stand with me?' along with a link to donate to him.

Dozens of Republican lawmakers, including Cruz and fellow objector leader Senator Josh Hawley, are facing harsh condemnation after going forward with challenging the results following the unprecedented assault on the Capitol.

Throughout the certification process, which was delayed six hours due to pro-Trump protesters marching the halls, a total of eight senators and 139 House members objected to the Electoral College results in some states – including Arizona and Pennsylvania.

Initially, at least 15 GOP senators signaled in one way or the other they would object, including the eight above. The ones who changed their mind after the riots include Ron Johnson of Wisconsin, James Lankford of Oklahoma, Steve Daines of Montana, Mike Braun of Indiana, Kelly Loeffler of Georgia, and both Tennessee Senators Marsha Blackburn and Bill Hagerty.

Democratic freshman Representative Cori Bush, a new progressive member of the 'squad,' is calling for the expulsion of these lawmakers and the others who she claims 'incited this domestic terror attack through their attempts to overturn the election.'

Bush, who was among lawmakers evacuated from the House Chamber Wednesday, is a member of the House Judiciary Committee, the chamber's investigative arm.

Cruz, Hawley, and other pro-objection Republicans now facing the prospect of significant money problems after top business leaders in America held a secret meeting and discussed 'defunding' the Republican ultras.

The Wall Street Journal revealed that business leaders including claiming it's time they 'put their money where their mouths are' and stop funding the leaders of the campaign to reverse the election.

Big business funnels millions of dollars each year into Congress through donations from CEOs and corporate leaders, donations on behalf of the companies, and organizing political action committees which funnel donations from employees.

Cutting off the money supply to Hawley, Cruz, and others would leave them depending on small-dollar donations - and also see them facing primary challengers with corporate backing.

'We have to create some level of cost,' Thomas Glocer, a former CEO of Thomson Reuters and a director at Merck and Morgan Stanley, told the Wall Street Journal after the meeting.

'Just coming out with another public letter isn't going to do much. Money is the keyway,' the business leader - a Democratic donor - said.

Walt Disney Co. Executive Chairman Robert Iger, a Democrat, was among the business leaders on the call. Iger has expressed interest in being an ambassador in Biden's administration.

Lloyd Blankfein, senior chairman of Goldman Sachs Group Inc., was also on the call as well as Accenture PLC CEO Julie Sweet, a Republican who has donated to Cruz, and Merck & Co. CEO Ken Frazier, who donated to candidates from both parties in the past.

Anthony Scaramucci, who served for just 10 days as Trump's White House Communications Director but has more recently been a critic of the president, was on the call.

People familiar with the virtual meeting say the discussion began with a conversation about political instability.

Another group of nearly 200 CEOs sent a letter on Monday urging Congress to accept Joe Biden as president-elect.

And inside the Republican caucus, Hawley, Cruz, and their followers also faced fury from other senators - with Tom Cotton, an ultra-conservative, suggesting they aided insurrection.

Objectors are now facing the wrath of even some of their own supporters, who claim the scene at the Capitol Wednesday should have been enough to deter them from the symbolic protest of the outcome of the election.

Republican Senator Tom Cotton, a Trump critic who never planned to challenge the results even before the Wednesday chaos, attacked his colleagues for going forward with the plan in another sign the GOP is splitting in the aftermath of the November 3 election.

'Yes look, you have some Senators who for political advantage were giving false hope to their supporters misleading them into thinking that somehow yesterday's actions in Congress could reverse the results of the election or even get some kind of emergency audit of the election results,' the Arkansas senator explained.

'That was never going to happen,' Cotton continued. 'Yet, these Senators – as insurrectionists literally stormed the Capitol – we're sending out fundraising emails. That shouldn't have happened, it's got to stop now.'

Hawley, however, said during his remarks while objecting to Arizona's results, that his challenge is not just symbolic – claiming his goal is to voice his legitimate concerns with the election process in 2020, mainly the laws changed to accommodate for a more lax mail-in voting system without, in some cases, state legislature approval.

The Missouri Republican came under fire after he was pictured appearing to stand in solidarity with the Trump protesters Wednesday by pumping his fist in the air in their direction as the mob descended on Capitol Hill.

Challenges to state outcomes were only deliberated if at least one Senator and one representative objected to the results.

While Representative Jody Hice of Georgia objected to the results in Georgia, no senator objected, including outgoing Senator Kelly Loeffler, who previously said she would challenge the results in her own state but changed her mind following the chaos at the Capitol.

Hice said Biden's win in the Peach State was tainted by 'an unprecedented amount of fraud and irregularities.' She did not provide any evidence for the claims.

Greene objected to Michigan's electoral votes, but no senator joined.

Representative Mo Brooks of Alabama, who can be credited with leading the last-ditch effort to overturn the election results, objected to Nevada's votes. Greene joined him in that challenge.

When Vice President Mike Pence, who presided over the proceedings, announced deliberations would not launch on Georgia, Michigan or Nevada's results, there were cheers from Democrats – and some Republicans.

Also overnight, Trump finally claimed in a statement there would be a 'peaceful transition' of power. The message was released on Twitter through his adviser Dan Scavino after the president was locked out of his account for three tweets stoking protesters.

On Wednesday afternoon, Trump spoke to thousands of his supporters gathered on the Ellipse to protest the outcome of the 2020 presidential election and Congress moving to certify the results.

After Trump left the stage, a large portion of those at the rally marched from there to Capitol Hill, where they stormed the steps of the building and were able to gain access.

For six hours protesters wandered the halls of Congress, banged on the House chamber doors, breached the doors of the Senate chamber, sat at the desks of lawmakers and their aides, and wreaked havoc.

Four were killed, including a female Trump supporter who was shot in the chest.

When the Senate reconvened at 8 p.m., and the House of Representatives at 9:00 p.m. after the building was cleared and law enforcement continued throughout the night to push the perimeter of Capitol Hill further out.