Three People Died From Medical Emergencies On Capitol Grounds Wednesday. Who Were They? 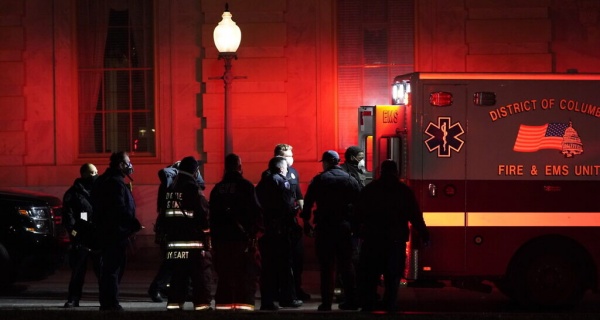 Benjamin Phillips, 50, from Ringtown, Pennsylvania; Kevin Greeson, 55, from Athens, Alabama; and Rosanne Boyland, 34, from Kennesaw, Georgia all died from medical emergencies on the grounds of the Capitol, Washington, D.C., police Chief Robert Contee III said in a press conference Thursday.

It was not immediately clear how Phillips and Boyland died. Boyland's family declined to comment Thursday. USA TODAY was unable to reach the families of Greeson and Phillips.

According to the New York Times, Greeson suffered a heart attack. He had been talking to his wife on his phone when he fell to the sidewalk, according to a New York Times reporter who watched as emergency personnel did chest compressions.

Greeson's wife, Kristi Greeson, told the Times that authorities contacted her afterward to say that her husband had died of a heart attack. Greeson, the father of five and a "political junkie," had high blood pressure, his wife told the Times. Greeson left home Tuesday and was excited to attend the rally, she told the Times.

Greeson's son, Kyler, posted a statement, along with a series of photos, to his Facebook Thursday, saying Greeson "was such a great man we all miss you so much."

A Twitter account for Kevin Greeson of Athens is infused with posts supporting Trump and profanely denouncing the president's critics. A post in May denied that COVID-19 was killing people, adding, "This is a way to make the President look bad and we ain't buying it. Trump 2020." One month later, amid Black Lives Matter demonstrations, a message to @realDonaldTrump urged, "time for protesting is over! Put military in the streets of every city."

According to the Philadelphia Inquirer, Benjamin Phillips was a computer programmer who founded a social media website for Trump supporters. He had organized a trip of several dozen people to D.C., and the group arrived Wednesday morning, reported the Inquirer, whose reporter traveled down with the group in their van.

"It seems like the first day of the rest of our lives, to be honest," Phillips told the Inquirer as they drove down.

Phillips was separated from the group when he went to park the van, but police later told some of the members that Phillips had suffered a stoke and died at the hospital, according to the Inquirer.

In addition to the three people who suffered medical emergencies, a U.S. Capitol Police employee shot a woman inside the building, and she later died. Police identified the woman Thursday as military veteran Ashli Babbitt.

"As protesters were forcing their way toward the House Chamber where Members of Congress were sheltering in place, a sworn (U.S. Capitol Police) employee discharged their service weapon, striking an adult female," police said in a statement Thursday. "Medical assistance was rendered immediately, and the female was transported to the hospital where she later succumbed to her injuries. She has been identified as Ashli Babbitt."

The employee has been placed on administrative leave and their police powers have been suspended pending the outcome of a joint Metropolitan Police Department and Capitol Police investigation, police said.