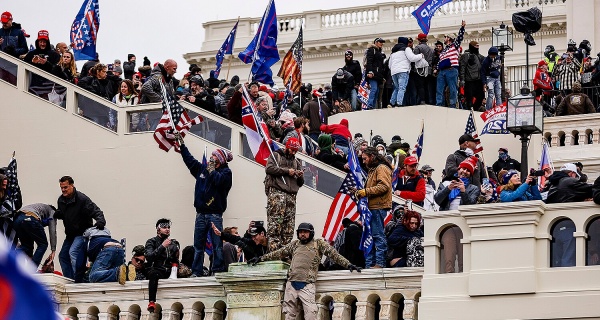 The woman who was shot and killed during the riot at the Capitol building Wednesday has been identified.

Ashli Babbit was confirmed to be the deceased by her husband Aaron, who spoke with KUSI News, and her mother-in-law, who also verified her identity to Fox 5 DC. She was a resident of the San Diego area and a veteran. Babbit was an outspoken supporter of Donald Trump, according to her social media feeds.

Babbit was one of hordes of Trump supporters who stormed the Capitol Wednesday as lawmakers were counting Electoral College votes to certify President-elect Joe Biden's win.

Metropolitan Police Department Chief Robert J. Contee III said in a press conference late Wednesday night that the woman was shot by one of the Capitol police officers who confronted rioters as they entered the building.

"One Capitol police officer discharged his service weapon, striking an adult female," Contee said, adding that she was taken to a local hospital, where she was pronounced dead.

Contee said that the shooting would be investigated by the MPD's internal affairs division "as we investigate all officer-involved deaths in the District of Columbia, including ones from other agencies."

"This is a tragic incident and I send my condolences to the victim’s family and friends," he added.

Contee also said at the press conference that at least three other deaths were reported, and at least 14 MPD officers were injured Wednesday.

PEOPLE reported earlier on Wednesday that a woman had been shot and later died.

Contee had said during an earlier press conference, "I can confirm that one civilian was reported to have sustained a gunshot wound inside of the Capitol. Details of the shooting are not immediately available, and the situation remains under investigation."

The gathering of Trump supporters began earlier Wednesday and eventually moved from the Mall to the Capitol building, forcing members of Congress to evacuate and hide and putting a temporary pause to the joint session.

The National Guard was called in, and Washington, D.C., Mayor Muriel Bowser issued a curfew beginning at 6 p.m., and the Capitol was eventually cleared out and declared secure. Congress later reconvened to finish the certification of Biden as president.

People in the mob were photographed Wednesday afternoon scaling the Capitol's walls, breaking windows, roaming through the building, looting and vandalizing, including in congressional chambers and lawmaker offices. Rioters also ripped an American flag off of a flagpole outside the Capitol building and replaced it with a Trump flag.

Throughout the day, lawmakers on both sides of the aisle condemned the rioters' violence, and former presidents Jimmy Carter, George W. Bush, Bill Clinton, and Barack Obama have all spoken out.