QAnon-Supporting Rep. Marjorie Taylor Greene Caused A 'Screaming Match' When She Refused To Wear A Mask at her swearing-in 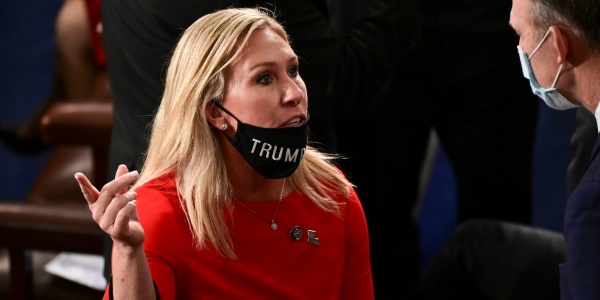 Republican freshman Rep. Marjorie Taylor Greene left the House floor on Sunday after she was told to put on a face mask, reporter Jake Sherman reported.

Sherman wrote that it prompted a "screaming match" between Democratic and Republican House floor staffers.

At Sunday's swearing-in ceremony, Greene could be seen with her mask pulled down while taking pictures and speaking with colleagues on the House floor.

Greene is well known for her support of the baseless QAnon conspiracy theory that alleges President Donald Trump is secretly fighting a "deep state" cabal of pedophiles.

Republican freshman Rep. Marjorie Taylor Greene's refusal to wear a face mask on the House floor reportedly prompted a screaming match during the swearing-in of the 117th Congress on Sunday.

Reporter Jake Sherman tweeted from the ceremony that Greene, who was elected in November to represent Georgia's 14th District, and one other unidentified Republican were told by House floor staffers to put their masks on and appeared to refuse.

Greene and the other Republican then left the House floor, Sherman reported.

He said the Republican and Democratic staffers "are in a screaming match on the floor," adding, "So this Congress is going great already." He didn't identify the staffers.

It was unclear whether this happened before or after Greene was officially sworn in.

Greene later posted a video after her swearing-in of her hugging Rep. Madison Cawthorn, a fellow Republican freshman.

A representative for Greene did not immediately respond to Insider's request for comment.

Greene responded to Sherman's tweets with a picture of herself wearing a face mask embroidered with the words "Trump Won," referring to President Donald Trump's and his allies' baseless belief that he won the 2020 election.

"Well I actually do have a mask," she wrote.

Other pictures from the day showed Greene with her mask pulled down while she was taking pictures and talking to colleagues on the House floor.

Greene later complained on Twitter about House Speaker Nancy Pelosi allowing Democratic Rep. Gwen Moore to vote in the election for speaker despite Moore's announcement that she had recently tested positive for COVID-19.

Moore tweeted on Sunday that her quarantine was over and that she had been "medically cleared to travel and work."

The Capitol's attending physician also created a secure enclosure to allow three representatives who were quarantining to cast their votes in the speaker election.

Pelosi was re-elected as House speaker by a narrow margin.

Greene tweeted that Pelosi "changed the COVID rules because she is desperate to cling to the gavel."

"No one can attack me about masks, when Pelosi is sending Democrats to the floor with positive COVID tests to vote for her for Speaker," she added.

Greene is known for her controversial support of QAnon, the baseless conspiracy theory that alleges Trump is secretly fighting a "deep state" cabal of satanic pedophiles. Greene has posted numerous QAnon-related messages on social media since 2018, according to the watchdog group Media Matters for America.

However, in August, she told Fox News that she had decided to "choose another path" after discovering "misinformation" in the QAnon community. She rejected the label of "QAnon candidate" and said that it "doesn't represent me."