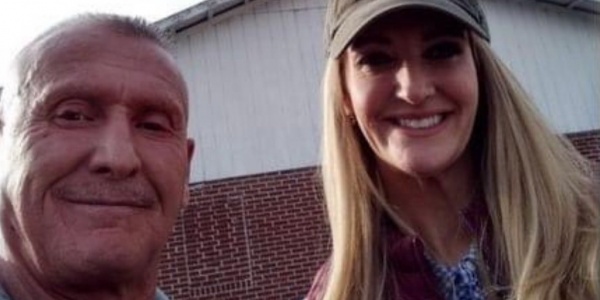 Georgia Senator Kelly Loeffler was criticized Saturday and Sunday for posing beside a former KKK leader, with less than a month before two runoff elections in the state that will determine which party controls the U.S. Senate.

The picture shows Loeffler smiling beside ring-wing activist Chester Doles. It was reportedly posted to Doles' social media on Saturday with the caption "Kelly Loeffler and I. Save America, stop Socialism."

Doles, who was a leader in the Ku Klux Klan, is a convicted felon with ties to several white supremacist groups, although he claims his current "American Patriots USA" group is free of racism.

"In 1993, Doles nearly beat a Black man to death. In 2017, he marched in Charlottesville," wrote Jewish activism group Bend the Arc in a Saturday night tweet with the picture of Doles and Loeffler. "This is who Kelly Loeffler is proudly appealing to."

Miryam Lipper, the communications director of Jon Ossoff, who is running against Georgia Senator David Perdue, tweeted "This is Georgia's GOP" on Sunday in response to the photo.

Political and sports commentator Keith Olbermann also criticized Loeffler in a tweet Sunday, writing, "This should be a problem for the Kelly Loeffler campaign, but it's hard to say right now.

"But it must be enough for the NBA and WNBA to force her out of the part ownership of the Atlanta team," Olbermann continued. "Association with overt racists cannot be permitted."

In June, Loeffler, who owns 49% of women's basketball team The Atlanta Dream, called armed Black protesters in Atlanta "mob rule" on a Fox News segment posted to the Georgia senator's Twitter account, which resulted in backlash from multiple WNBA players.

After the WNBA announced its 2020 season would be dedicated to social justice, Loeffler reportedly sent a letter to WNBA Commissioner Cathy Engelbert objecting to the league's plan to honor the Black Lives Matter movement, according to Forbes.

According to a report in August by Fox News, Loeffler issued a statement in response to the protests claiming the WNBA "is more concerned with playing politics than basketball."

Republican Majorie Taylor Greene, representative-elect for Georgia's 14th congressional district, was seen posing beside Doles on her campaign trail earlier this year. However, she reportedly removed Doles from a rally at which Loeffler made an appearance, stating "he is not welcome at any events that I attend. Period."

After Doles attended the GOP rally, Loeffler claimed she was unaware of him and the controversy he carried, according to local reports. Loeffler's campaign offered similar claims in regards to the recent picture taken with Doles.

"Kelly had no idea who that was, and if she had she would have kicked him out immediately because we condemn in the most vociferous terms everything that he stands for," Stephen Lawson, Loeffler's campaign spokesman, said in a statement Sunday.

Warnock spokesperson Michael Brewer said in a statement shared with Newsweek Sunday: "While Kelly Loeffler runs a campaign based on dividing and misleading Georgians, she is once again trying to distance herself from someone who is a known white supremacist and former KKK leader who nearly beat a Black man to death. There's no acceptable explanation for it happening once, let alone a second time."

Loeffler's campaign didn't respond to Newsweek's request for comment in time for publication.