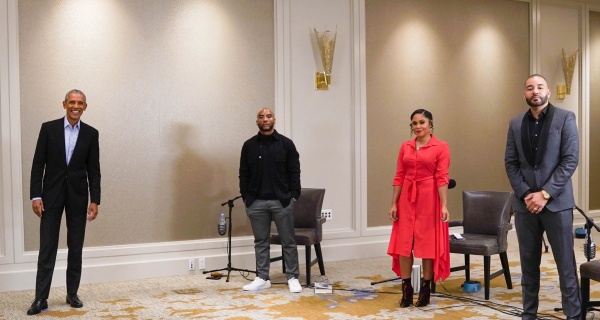 ‘I understand it because when I was elected there was so much excitement and hope,’ the former President Obama remarked.

Former President Barack Obama sat down with “The World’s Most Dangerous Morning Show,” The Breakfast Club, and opened up about critique of his service to the Black community.

In conversation with hosts Charlamagne Tha God, Angela Yee, and DJ Envy, Obama shared thoughts on his presidency and current politics. DJ Envy asked the 44th president how he feels about criticism from Black people about what his presidency accomplished or did not, for the community.

“I understand it because when I was elected there was so much excitement and hope, and I also think we generally view the presidency as almost like a monarchy in the sense of once the president’s there, he can just do whatever needs to get done and if he’s not doing it, it must be because he didn’t want to do it,” Obama said Wednesday.

DJ Envy responded, offering  Donald Trump as an example of a political leader who does what he wants to do.

“Because he breaks laws or disregards the constitution,” Obama said. “The good news for me was I was very confident in what I had done for Black folks because I have the statistics to prove it.”

The former president continued to share how his policies aided in Black employment, Black income, Black incarceration rates, and Black health. Charlamagne went on to press Obama on what changes were made specifically for Black people.

“A lot of my policies were targeted towards people most in need. Those folks are disproportionately African American,” Obama responded. “At the end of the day, there is no way in eight years to make up for 200 years.”

The conversation also included his thoughts on the importance of the runoff Senate elections in Georgia, sharing how majority leader, Mitch McConnell, blocked a lot of his efforts.

“If the Republicans win those two seats, then Joe Biden and Kamala Harris will not be able to get any law passed that Mitch McConnell and the other Republicans aren’t going to go along with,” he remarked.

During the interview, Obama also spoke to the GOP and their brand of politics and catering to white men.

“What’s always interesting to me is the degree to which you’ve seen created in Republican politics the sense that white males are victims,” Obama said. “They are the ones who are under attack, which obviously doesn’t jive with both history and data and economics. But that’s a sincere belief, that’s been internalized, that’s a story that’s being told and how you unwind that is going to be not something that is done right away,” he said.

Obama visited the radio show as he continues to promote his latest memoir The Promised Land. theGrio reported the book sold over 800,000 copies in one day. According to theGrio he also will be honored by PEN America, its second annual Voice of Influence Award. Ava DuVernay received the inaugural honor.

“As an organization of writers, we have always seen President Obama not just as a leader, but as one of us: an author. His probing and evocative narratives helped introduce the world to his unique background, and the power of his life experience as a prompt toward a more pluralistic and encompassing society,” PEN America CEO Suzanne Nossel said.