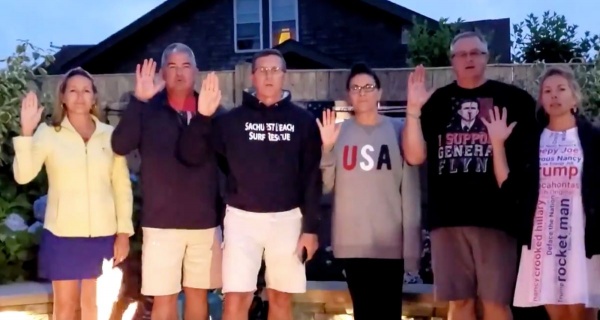 The brother of Michael Flynn appeared to thank supporters of the QAnon conspiracy theory after Donald Trump pardoned his former national security adviser for lying to the FBI.

Trump announced with "great pleasure" on Tuesday that the retired army general has been granted a full pardon. Flynn had previously admitted to twice lying to the FBI about conversations with the then-Russian ambassador to the U.S. Sergey Kislyak.

"Congratulations to @GenFlynn and his wonderful family, I know you will now have a truly fantastic Thanksgiving!," Trump tweeted.

The move was met with a wide range of emotions and theories by supporters of QAnon, who believe Trump is fighting a secret war against the "deep state" and high-profile satanic pedophiles.

Flynn has been seen as a hero in the QAnon movement ever since he tweeted a video in July of him standing in a back yard with his family taking a generic oath of office before ending with "where we go one we go all," the main slogan of the QAnon theory. It is often abbreviated to WWG1WGA.

His tweet included the hashtag #TakeTheOath, which is used by other followers of the QAnon movement when posting similar videos of them expressing their support on social media.

Other hashtags used by QAnon supporters include #WWG1WGA #QArmy and #DigitalSoldiers.

Flynn has both #TakeTheOath and #DigitalSoldiers in his Twitter bio.

Following his pardon, Flynn's brother Joseph Flynn also thanked the "digital soldiers" who have supported the former national security down the years in a tweet, albeit with a spelling mistake.

"To all of our friends, extended family, Patriots, and #DigitalSoliders we thank all of you from the bottom of our hearts for your moral, spiritual and financial support these past 4 years," he wrote. "There is no way in Hell we would have survived without you...this Thanksgiving is for you!"

Given that the radical conspiracy theory contains a wide range of false beliefs that frequently change and alter to suit their needs, it is unsurprising that QAnon supporters have given a number of possible and incoherent meanings behind Fynn's pardon.

Some have suggested that the November 25 date of the pardon is significant as it coincides with John F. Kennedy Jr's birthday. Many QAnon supporters believe that the son of the former president, who died in 1999, is still alive and would make a triumphant return to campaign for Trump during the election.

Others believe that the pardon is linked to a number of lawsuits filed by Trump's former lawyer Sidney Powell.

Powell's lawsuits, which both she and QAnon supporters refer to as the "Kraken," claim to reveal widespread voter fraud in Michigan and Georgia.

Powell, who recently gave a press conference alleging that former Venezuelan president Hugo Chavez, who died in 2013, helped rig the election for Biden by creating the Dominion Voting Systems, is Flynn's personal attorney.

This moment, known as "The Storm" has been frequently tipped to happen by QAnon supporters, including on specific dates, for the past three years to no avail.

In a further statement following his pardon, Flynn's family said: "For four long years, our family and millions of American patriots stood arm-in-arm together with our brother, General Michael T. Flynn, fighting the vicious, deep-rooted corruption of government institutions and vengeful individuals intent on destroying General Flynn and our country in shameful defiance of justice and the Rule of Law.

"Today, the Flynn family is grateful to President Donald J. Trump for answering our prayers and the prayers of a nation by removing the heavy burden of injustice off the shoulders of our brother, Michael, with a full pardon of innocence."